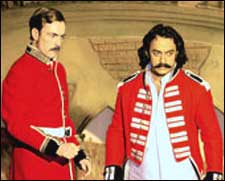 Priyanka Pulla / fullhyd.com
EDITOR RATING
7.0
Performances
Script
Music/Soundtrack
Visuals
NA
NA
NA
NA
Suggestions
Can watch again
NA
Good for kids
NA
Good for dates
NA
Wait for OTT
NA
A story with the potential to awe and pique, and an actor whose guileless enthusiasm strikes a bond with the audience no matter who he is playing, both come together in Mangal Pandey: The Rising, and manage to fuse into a few moments of pure brilliance.

While watching the movie, you get to see how history distills into a fable - how the complicated, meandering travails of a life, many lives, become a geometrically simple apologue. History book rewritings, carbon dating recalibrations and fresh perspectives have, in the past, always questioned the popular version of legends.

So was it with Mangal Pandey, when Rudrangshu Chatterjee tried to make out that he was just an ordinary soldier who got too drunk one night and accidentally sparked a mutiny for which he paid with his life (in his book Mangal Pandey: Brave Martyr or Accidental Hero?). The fresh evidence has been coming in such a steady stream till now, that all of us today hold all historical legends with a respectable amount of healthy skepticism.

But doing that by no means takes away the power of the legend. So despite the oversimplified portrayal of the British as stupidly hubristic, swollen-headed tyrants, and Indians as the eccentrically valiant rebels, and despite the attempt to wash off all color and create a sensationalist black-and-white story in "The Rising", the intelligence doesn't rebel, and the heart responds with frissons and goose-pimples.

At the end of the day, we all need a story, a legend, a fable. "A dream, a fantasy, to take me through reality." And Mangal Pandey is one such parable that struck a chord with most who watched it in theaters today.

The story is of the 1857 sepoy mutiny that is believed to be the first organized rebellion against the British rule in India. Tantia Tope, Nana Saheb, Bahadur Shah Zafar and Rani Laxmibai too threw in the gauntlet then, as we learn in the movie. It began when the British introduced a new rifle whose cartridge had to be bitten open with the teeth, and when rumor spread that this cartridge was greased with cow and pig fat, wide unrest spread between the Hindu and Muslim sepoys.

Mangal Pandey was one among them, and the first who rebelled. And burdened and belabored by constantly having to turn against their own countrymen, and finally, as the last straw, having to commit sacrilege, the sepoys broke into a massive rebellion that was suppressed only a year later.

Well, that's the history that gave rise to The Rising. And Aamir Khan plays Mangal Pandey. Watch him on screen, and you will love the character. With long flaring strands of hair falling across his shoulders, he looks like a formidable Viking warrior, except here he an even more inspiring character. A Hindu warrior within the grasp of a powerfully deep tradition, provoked to protect his dignity by the constantly brash and marauding Britishers. A warrior whose indignation finally consumes him and throws him into almost reckless rebellion.

The movie of course shows it all larger than life. Mangal Pandey's thoughts and deliberations, his slow and purposeful movement towards the big tipping point.

Hindi movies, unfortunately, have not yet moved to the more honest depiction of the inner turmoil that any hero, who is first a human being, would have gone through - the tribulations, the wrenching pain, the indecision that leads to a momentous act. So Mangal Pandey moves on very purposefully through his act to arouse his fellow sepoys into a rousing rebellion. It's beautiful and inspiring, but there is always a twinge of skepticism in those who watch.

On the other hand, Gordon (Toby Stephens), who plays Mangal's Britisher friend and tries till the end to protect him and ultimately turns a rebel himself, is one whose character develops articulately in the movie. The confusion of having to choose between a friend and a fiendish and lawless employer is clearly seen.

Rani Mukherjee is Hira, a nautch girl who plays Mangal's love interest. She is hardly seen in the movie except for her dance sequences, which don't give her too much scope.

Amisha Patel as Jwala, the sati widow who is rescued by Gordon, seems like she forgot to change her expression for the movie while she changed her clothes and got off her make-up. She is unconvincing like a high schooler taking part in a maudlin and exaggerated play.

At the end of the day, The Rising is going to be one of Aamir Khan's chef d'oeuvres. And the movie is bound to touch the hearts of many. After all, a nation that has held together for more than 50 years now needs commemorations, legends and inspiring stories. And Mangal Pandey is one of them.
Share. Save. Connect.
Tweet
MANGAL PANDEY - THE... SNAPSHOT
MANGAL PANDEY - THE RISING SNAPSHOT

ADVERTISEMENT
This page was tagged for
Mangal Pandey - The Rising hindi movie
Mangal Pandey - The Rising reviews
release date
Aamir Khan, Toby Stephens
theatres list
Follow @fullhyderabad
Follow fullhyd.com on
About Hyderabad
The Hyderabad Community
Improve fullhyd.com
More
Our Other Local Guides
Our other sites
© Copyright 1999-2009 LRR Technologies (Hyderabad), Pvt Ltd. All rights reserved. fullhyd, fullhyderabad, Welcome To The Neighbourhood are trademarks of LRR Technologies (Hyderabad) Pvt Ltd. The textual, graphic, audio and audiovisual material in this site is protected by copyright law. You may not copy, distribute, or use this material except as necessary for your personal, non-commercial use. Any trademarks are the properties of their respective owners. More on Hyderabad, India. Jobs in Hyderabad.