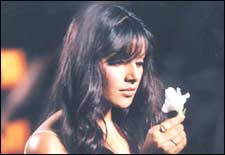 You know she has psychic powers and a touch of ESP, but when you learn that the tender reunion with her grandma was, more precisely, a 2-minute conversation with her electroencephalographically challenged grandma, you are spooked. And then when you see the Abhishek Bachchan - Bipasha Basu dance on some truly macabre version of 'One Love' (by Blue), you know this movie is going to get scary yet!

How the story integrates all its characters is deeply interesting. There is Ria (Neha Dhupia) who is married to a clinical whack-job in Sunny (Dino Morea). Sunny belongs to the unfortunate clan of men that can actually hit a woman. Yeah, well, that's one gene pool that needs a truckload of chlorine.

Sunny also has no qualms about seeing other women despite being a married man. This brings him into contact with Natasha (Amrita Arora), who is the fiancée of Rahul (Sanjay Dutt) and the lover of Abhigyan (Himanshu). Okay, so maybe it isn't so much the story as it is Natasha that integrates the characters.

When Natasha goes missing for four days, the movie starts to really get it on. Drishti is asked to help with the investigations using her psychic powers. She leads them to the body (yup, Natasha's dead, and we have a supernatural thriller on our hands), and a trial gets underway with Sunny as the prime accused.

Abhigyan is the public prosecutor who manages to secure a conviction. With Sunny behind bars, Drishti starts having disturbing, morbid visions of Natasha informing her that the actual killer is still at large.

Every actor in Rakht has delivered a very honest performance. Amrita Arora is really not afraid to look scary/non-good, and that deserves some serious kudos in a vanity-driven industry (refer to Ashoka and Devdas where Shah Rukh Khan did not change his hairdo to compliment his character).

Bipasha is convincing as a tarot card reader, down to the shoddy taste in skirts. Suniel Shetty, as Drishti's mentally challenged friend Mohit, is left short of great only due to his dialog delivery.

Watch it for what it is. Don't psychoanalyse it. It's not a documentary; it's just the director's canvas.
Share. Save. Connect.
Tweet
RAKHT SNAPSHOT

ADVERTISEMENT
This page was tagged for
Rakht hindi movie
Rakht reviews
release date
Bipasha Basu, Sanjay Dutt
theatres list
Follow @fullhyderabad
Follow fullhyd.com on
About Hyderabad
The Hyderabad Community
Improve fullhyd.com
More
Our Other Local Guides
Our other sites
© Copyright 1999-2009 LRR Technologies (Hyderabad), Pvt Ltd. All rights reserved. fullhyd, fullhyderabad, Welcome To The Neighbourhood are trademarks of LRR Technologies (Hyderabad) Pvt Ltd. The textual, graphic, audio and audiovisual material in this site is protected by copyright law. You may not copy, distribute, or use this material except as necessary for your personal, non-commercial use. Any trademarks are the properties of their respective owners. More on Hyderabad, India. Jobs in Hyderabad.