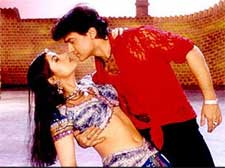 Vineeth Shastry / fullhyd.com
EDITOR RATING
3.0
Performances
Script
Music/Soundtrack
Visuals
NA
NA
NA
NA
Suggestions
Can watch again
NA
Good for kids
NA
Good for dates
NA
Wait to rent it
NA
These days, films usually have script-writers who write stories based on the ideas given to them. Why? The writer's block, silly! For this flick, the idea was given by Suneel Darshan, who got it in the first place from Sholay. And the only reason that it got accepted (the idea, that is) was that the film was written and directed by his brother, Dharmesh. Why else would anyone accept such a hit theme as Sholay and not notice the similarities? I guess you call that the writer's selective memory block.

If you haven't seen Sho... oops, Mela, here's the story. There are two friends who could go down in history as role models for friendship, Shanker and Kishen, and then there's a dacoit, Gujjer Singh, and his side kick Kaali. Reminded of something? Shucks, these guys couldn't even think of different names.

Well these are just a few of the similarities. As for the bad guy, not only does he have a name and and a sidekick very similar to Gabbar, he also has the famous belt, which actually could be the same one that Gabbar used. The music is the only original aspect here. Surprisingly, it is Anu Malik's! Somehow they are pretty 'uninspiring'.

The movie starts with Gujjer coming into a village to assassinate a minister as well as to plunder the area. Well, he's a terrorist-cum-dacoit, keeping in pace with the times. One brave soldier puts up a gallant fight and dies in the process. Gujjer leaves the village after abducting the soldier's sister, Roopa, played by Twinkle. When Gujjer tries to rape her, she dives into the nearby waterfalls, which are like 500 to 600ft long. And she vows to avenge her brother's death in her next birth. But to her surprise (and our's as well), she survives. She then meets up with Aamir and Faisal Khan. And after a lot of songs and dances together, they take revenge against Gujjer.

All in all, a waste of a lot of money, talent and sets. Definitely a movie that should be kept away from. By the way, there were more than 300 extras used as background dancers in the songs. The only nice thing about the flick, though, was the comedy by Johnny Lever. But then again, the jokes have been lifted from Dumb and Dumber. So much like the thought processes of the two brothers who came up with this flick, if you know what I am talking about.
Share. Save. Connect.
Tweet
MELA SNAPSHOT

ADVERTISEMENT
This page was tagged for
mela movie in hindi
Mela hindi movie
Mela reviews
release date
Aamir Khan, Twinkle Khanna
Follow @fullhyderabad
Follow fullhyd.com on
About Hyderabad
The Hyderabad Community
Improve fullhyd.com
More
Our Other Local Guides
Our other sites
© Copyright 1999-2009 LRR Technologies (Hyderabad), Pvt Ltd. All rights reserved. fullhyd, fullhyderabad, Welcome To The Neighbourhood are trademarks of LRR Technologies (Hyderabad) Pvt Ltd. The textual, graphic, audio and audiovisual material in this site is protected by copyright law. You may not copy, distribute, or use this material except as necessary for your personal, non-commercial use. Any trademarks are the properties of their respective owners. More on Hyderabad, India. Jobs in Hyderabad.