Memoirs Of A Geisha Review 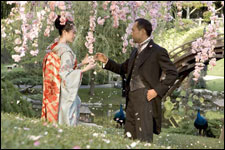 Priyanka Pulla / fullhyd.com
EDITOR RATING
7.5
Performances
Script
Music/Soundtrack
Visuals
NA
NA
NA
NA
Suggestions
Can watch again
NA
Good for kids
NA
Good for dates
NA
Wait to rent it
NA
Memoirs Of A Geisha is a tantalisingly ripe and fulsome glance into what, to us, is an unreachable world. The Japanese Geisha world is so exotic sometimes that one cannot cut through its baroque trappings to the human stories underneath.

Chingari's Sushmita Sen made you heave with pain and sympathy, but even the pain of these Geishas is subsumed by the romance of the story. The Geisha world reveals itself in a blur, through the frosted glass of space/time that separates us from it, through a showcase of exoticism. What you feel is an enchanted horror, the kind you do when you see an evil sorcerer in a fairy tale.

And so Memoirs Of A Geisha really is a stunning costume drama, almost psychedelic in its multi-hued depiction of a visually breathtaking world – the 1930s world of Geishas. Flamboyant butterfly-like kimonos, landscaped gardens, faces painted to unblemished perfection, the extreme delicacy and feminity of a Geisha's looks and carriage... oooh! John Williams scores the music, using the plucking of the Shamisen to complete the resounding wholeness of the scenes.

The tale begins when 9-year-old Chiyo (Suzuka Ohgo) and her sister are sold off by their aging parents to a Geisha house. They are soon separated, and Chiyo is left crying to figure out where she is at. Before she realises she is in a Geisha house, she has a venom-spitting rival with her talons in her – the beautiful, witch-like Hatsumomo (Li Gong), who is more than twice her age.

But soon her little mate Pumpkin inducts her into the Geisha world, and inculcates a healthy desire in her to be one herself. Hatsumomo's schemes, however, ensure she falls out of the favor of Mother (Kaori Momoi), the madam of the house, and is reduced to serving as a Geisha maid the rest of her life.

There are only a few highlights in this story, moments that break thorough the visual clutter and strum on your soul. One of them is when the dejected young Chiyo meets the older (easily 30) Chairman on a bridge as she is brooding unhappily. Ken Watanabe's is one of the finest performances in the movie as he comforts the girl and buys her Cherry Plum ice. His kindness is so delightful in the dreariness so far, you long to see him again as much as young Chiyo does. It doesn't come across as so pervy that a teenage girl looks at his avuncular concern as romantic love.

Chiyo's fortunes do a total flip as Mameha (Michelle Yeoh) comes home the very next day to offer Mother to take her and groom her into a Geisha at her own expense. The training of Chiyo from this point onwards is the blossoming of the movie everyone is waiting for.

It's Geisha Geisha Geisha all the way now as people finally get the see what the deal really is with that fascinating world. But here is the lowdown for those who are waiting, keeping their fertile imaginations on hold – a Geisha is an artist and not a prostitute. She sells her skills, not her body. She is judged as a moving work of art, and a work of art she is in her captivating make up, playing stringed instruments, performing complex fan-dances.

The seductive images of Geisha culture are what will leave with you in the theater, not the story of the forbidden love, jealousy or kindness. Chiyo becomes Sayuri (Ziyi Zhang), the most celebrated Geisha in Japan, but it is not simply her physical allure that decides it. It's complex strategy, rigorous training in subtle arts (a slight flash of the inner wrist while pouring tea ignites a man's mind with the hint of bare inner flesh), and heart-ache that finally yields the coveted position to Nitta Sayuri.

The subtlety of a Geisha's overtures is indeed beautiful, and nothing like the raunchy come-ons you see in a street-walker's demeanour. It is easy to believe why a Geisha isn't a prostitute, even if she does sell her body for money sometimes in this movie.

The seductive trail of Sayuri takes her from man to consumed man, as she searches for her own true love. The World War 2 brings in the beefy Americans, and transformed Geishas who now smoke pipes, leave their kimono blouses open, and speak with a twang.

There are politics galore, which is hard to follow in the broken accent, as Sayuri stumbles from the arms of one man to another, in search of security for her and Mameha.

Memoirs Of A Geisha is really a heavily ornamented fairy tale. It's really a story as old as the hills, but painted ritzily in the vivid motifs of 1930s Japan. Which makes it burdenless on your mind even as it is first-rate entertainment. The token ill-treated child, the vulnerable beauty, are all the girders that keep the fantasy going.

Watch it this weekend for some absorbing recreation. You will be enchanted.
Share. Save. Connect.
Tweet
MEMOIRS OF A GEISHA SNAPSHOT

ADVERTISEMENT
This page was tagged for
Memoirs Of A Geisha english movie
Memoirs Of A Geisha reviews
release date
Ziyi Zhang, Michelle Yeoh
theatres list
Follow @fullhyderabad
Follow fullhyd.com on
About Hyderabad
The Hyderabad Community
Improve fullhyd.com
More
Our Other Local Guides
Our other sites
© Copyright 1999-2009 LRR Technologies (Hyderabad), Pvt Ltd. All rights reserved. fullhyd, fullhyderabad, Welcome To The Neighbourhood are trademarks of LRR Technologies (Hyderabad) Pvt Ltd. The textual, graphic, audio and audiovisual material in this site is protected by copyright law. You may not copy, distribute, or use this material except as necessary for your personal, non-commercial use. Any trademarks are the properties of their respective owners. More on Hyderabad, India. Jobs in Hyderabad.