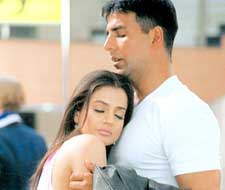 Sajid Hussain / fullhyd.com
EDITOR RATING
3.0
Performances
Script
Music/Soundtrack
Visuals
NA
NA
NA
NA
Suggestions
Can watch again
NA
Good for kids
NA
Good for dates
NA
Wait to rent it
NA
Mere Jeevan Saathi is like a merry-go-round - minus the 'merry' part. The narrative goes round and round and round and round - and when it is all over, you are physically drained, dizzy and down with a severe stroke of migraine.

The film is yet another addition to the ensemble of triangular love stories that keep springing up every now and then, intending to add some nostalgic value to the changing face of Bollywood. And in a desperate attempt to add a "hatke" ingredient to an outrageously stereotyped plot, the director ends up conceiving a film that is weird in its imagination and ultimately manifests itself as a foolish entertainment.

What is even more shocking is that the end product of all these “freshly brewed” peculiarly innovative flicks is the same – the protagonist sandwiched between two women, his inability to handle the predicament, and the inevitable sacrifice of one of the damsels (usually the bitchy one), thus paving the way to a "happy" ending. And adding insult to injury, they expect it to work.

It all begins with the grand launch of a wannabe pop star - Vicky (Akshay Kumar) whose "hit" single "Mere Jeevan Saathi" propels him to instant fame. Women swoon all over him and men start staring at him in awe and amazement. His instant success makes way for him to sign a lucrative contract with an American company Angel Records, who envision launching him onto the international arena.

It also happens that Vicky is deeply in love with his college sweetheart Anjali (Amisha Patel). And every once in a while, they keep reminding each other how deep their love for each other is, lest they forget and fall away from that realization. Vicky then embarks on a tour to the US to promote his new album, and he chances upon a meeting with the gorgeous CEO of his record company, Natasha (Karishma Kapoor).

Vicky is attracted to her right away, and before you wink another eye, he ends up sleeping with her. Come dawn, and realization dawns upon him. He brands the incident as just another sexual encounter with no strings attached .But Natasha refuses to admit that it was a one-night-stand, and decides to pursue her love for Vicky, further.

What follows is a tedious series of confrontations propelled by a clichéd and melodramatic dialogue. And the sheer predictability of the events makes you squirm in your seats desperately waiting for the movie to get over. And the only thing that could be worse is trying to relive the ordeal you have labored through, in order to pen a review.

Amisha Patel is as stony-faced as any of the statues on Tank Bund, and her histrionic skills are limited to her pouted quivering lips and her orgasm-bearing expressions. Akshay Kumar delivers a decent performance, enveloped by the limited scope the stumbling script offers him. But it is a pleasant surprise to see Karishma Kapoor pull through, defying the odds after that long, unpleasant hiatus. Though she gets a li’l loud at times, she manages to impress, and still has the potential to sizzle on demand.

This is a flick that was intended to run purely on thematic strength and character progression. So it would to be unwise on your part to expect anything significant from the technical department. And the film manages to keep up with your expectations here. Also, the music by Nadeem-Shravan is ordinary and "uninspired", and fails to give a lilting touch to the pop star persona of its protagonist.

Planning to catch Mere Jeevan Saathi over the weekend? Go and take a nice dip in the Hussain Sagar instead.
Share. Save. Connect.
Tweet
MERE JEEVAN SAATHI SNAPSHOT

ADVERTISEMENT
This page was tagged for
mere jeevan saathi 2 movie in hindi
mere jeevan saathi movie
Mere Jeevan Saathi hindi movie
Mere Jeevan Saathi reviews
release date
Follow @fullhyderabad
Follow fullhyd.com on
About Hyderabad
The Hyderabad Community
Improve fullhyd.com
More
Our Other Local Guides
Our other sites
© Copyright 1999-2009 LRR Technologies (Hyderabad), Pvt Ltd. All rights reserved. fullhyd, fullhyderabad, Welcome To The Neighbourhood are trademarks of LRR Technologies (Hyderabad) Pvt Ltd. The textual, graphic, audio and audiovisual material in this site is protected by copyright law. You may not copy, distribute, or use this material except as necessary for your personal, non-commercial use. Any trademarks are the properties of their respective owners. More on Hyderabad, India. Jobs in Hyderabad.