When we called the theater to advance book tickets for this film, the guy at the counter told us not to bother. "Mil jaayega saab, bekaar picture hai". That's about all you need to know about Plan, but we do have another 450 words to go, so here are all the gory details.

Four vacuous small-town guys come to Mumbai in search of the big city lights and all that it brings with it - stacks of money, nymphs falling out of their dresses and fame. Dino Morea plays a wannabe actor, and gets by on the sole charm of his dimpled grin. Sadly, this charm wears out after the first five minutes. 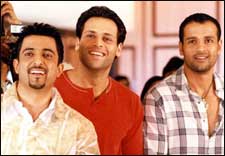 Sanjay Suri is a compulsive gambler, who optimistically calls himself Lucky. He looks good in his new goatee, but he's not allowed to do much else in the film. Rohit Roy is the hatcher of plans, who comes to the city to get rich. All his ideas are colossally stupid, but his friends love him anyway, and this encourages him to surpass himself every time.

Bikram Saluja comes to the town looking for the one true love of his life, Riya Sen, who makes an appearance for exactly 20 seconds. She wants to have nothing to do with him, for no reason apart from the fact that she's "changed" - from transparent salwar kameezes to transparent tank tops. 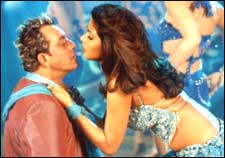 So this sad lot goes around the big city and finds out that they're not exactly going to be showered with money and molls for showing up. They also manage to spend all the money they have on living it up, which apparently consists of going to a theme park, picking up girls in a pub and getting haircuts.

When they're at the end of their tether and neck-deep in a gambling debt, they decide on a solution to end all their problems in one fell swoop. Why not kidnap a rich man who's unknown but sufficiently loved for his family to cough up the ransom? Good plan, no? Only they choose Musa bhai, Mumbai's biggest don played by an utterly bored-looking Sanjay Dutt.

The hostage, it turns out, doesn't mind being captured because all his bodyguards have turned traitors. So he hangs out with the four chokras, and teaches them to handle a gun, dance badly, and shower currency notes on most every woman they meet.

After many shootouts and random fights with Musa's arch nemesis, and vanquishing all the evil fiends (except for the sadist who wrote the script), the four decide a big city life is not for them, it requires too much by way of talent and competence.

One of the only reasons the cinema hall was even as populated as it was, was that people were expecting a Munnabhai MBBS Part 2. But Sanjay Dutt doesn't even bother in this one; his attitude is one that says - let's get this over with and pretend it never happened.

ADVERTISEMENT
This page was tagged for
Plan hindi movie
Plan reviews
release date
Sanjay Dutt, Dino Morea
theatres list
Follow @fullhyderabad
Follow fullhyd.com on
About Hyderabad
The Hyderabad Community
Improve fullhyd.com
More
Our Other Local Guides
Our other sites
© Copyright 1999-2009 LRR Technologies (Hyderabad), Pvt Ltd. All rights reserved. fullhyd, fullhyderabad, Welcome To The Neighbourhood are trademarks of LRR Technologies (Hyderabad) Pvt Ltd. The textual, graphic, audio and audiovisual material in this site is protected by copyright law. You may not copy, distribute, or use this material except as necessary for your personal, non-commercial use. Any trademarks are the properties of their respective owners. More on Hyderabad, India. Jobs in Hyderabad.