Fun With Dick And Jane Review 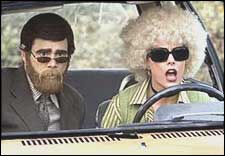 Priyanka Pulla / fullhyd.com
EDITOR RATING
7.5
Performances
Script
Music/Soundtrack
Visuals
NA
NA
NA
NA
Suggestions
Can watch again
NA
Good for kids
NA
Good for dates
NA
Wait to rent it
NA
Fun With Dick And Jane has exactly the same brand of unashamedly self-indulgent, whacky humor of Carey as earlier - the kind that makes you break out predictably into helpless, aching laughter. Initially, it is a little sporadic, and you begin to worry if the king of slapstick is past his prime, if his jokes have finally gotten stale. But by the second half it really picks up power, and pummels you like a punching bag with its tomfoolery.

This one is a remake of a 1977 comedy about a married couple who go bankrupt and resort to robbery using their son's squirt gun. Dick Harper this time is Jim Carey, and his wife Jane is Tea Leoni. Their son is a clownish little nipper who speaks half in Spanish all the time 'cause of his Mexican governess. They are a quirky looking family even before they really open their mouths.

Now Dick, who has just joined a new company called Globodyne, is immediately and unexpectedly promoted to Chief Of Communications. He is thrilled, and his wife promptly quits her job in celebration. But what he doesn't realise is that he has been set-up for target-practice by the press and media, by a company that is about to go down-under.

So Dick is on the news answering the questions of a pesky anchor, and his eyes are as round as a lemur's 'cause he has no clue what he is talking about. Propped up as the captain of the ship who has no idea it is sinking, he is jumping from one piece of shipwreck to another, trying to keep up the illusion for the audience while figuring out the truth himself. And of course, that makes him a nationwide buffon.

Next he comes home, and his wife's quit her job. He starts looking, but from one hilarious interview to another, all he gets is to be the comedian. From one job as a supermarket usher for Dick, to a guinea-pig for a new Botox-like innovation for Jane, the couple hop along from disaster to disaster.

Till the day comes, of course, that Jim decides to resort to robbery. With his son's squirt gun. Jane isn't even taking him seriously when they go to the first store. A couple of completely asinine but gut-busting antics later, he is tumbling out with nothing but a glass of slush. Soon enough, the fact that they are about to lose their house, next in line with all the furniture and goodies they have already had to sell off, convinces Jane to help Dick make his robberies a little more respectable. Not to mention successful.

From this moment onwards, it is hard to shut up. You are laughing all the way into the interval, through it, after it, and out of the theater. You are laughing at night in bed when you recall Dick in a particularly lamebrained caper. The couple rent atrocious costumes from stores, and go along their burglaries wearing everything from voice modulators to drag-queen make-up.

There is plenty of play in the later half on all the corporate scandals, whether Enron, Worldcom or Arthur Anderson. Alec Baldwin, who plays the president of the company who scoots off with the loot after selling the employees down the river, shows up shooting ducks on his vacation, caught on TV. He makes crazy slips of tongue, divulging his dirty tricks, and covers them up with a palm on the mouth.

So Dick and Jane target him next, and guess what? They get him. Its a crazy roller-coaster ride that ends entirely too soon (1-1/2 hours) with Dick kissing Jane after having toppled the big charlatan right over. Frank Boscombe (Richard Jenkins) as the drunkard who plots with the twosome to get the moneypile out of their boss, is hilarious too. The inspiration from Kenneth Lay and Jeffrey Skilling is rather obvious.

As good as every other Carey flick, Dick and Jane only adopts the slapstick madness more consciously. And chucks it at you with exacting aim, and extra force. As the balloons of humor burst upon you with violence, you can’t help being satisfied with this Carey blow-out.
Share. Save. Connect.
Tweet
FUN WITH DICK AND... SNAPSHOT
FUN WITH DICK AND JANE SNAPSHOT

ADVERTISEMENT
This page was tagged for
Fun With Dick And Jane english movie
Fun With Dick And Jane reviews
release date
Jim Carey, Tea Leoni
theatres list
Follow @fullhyderabad
Follow fullhyd.com on
About Hyderabad
The Hyderabad Community
Improve fullhyd.com
More
Our Other Local Guides
Our other sites
© Copyright 1999-2009 LRR Technologies (Hyderabad), Pvt Ltd. All rights reserved. fullhyd, fullhyderabad, Welcome To The Neighbourhood are trademarks of LRR Technologies (Hyderabad) Pvt Ltd. The textual, graphic, audio and audiovisual material in this site is protected by copyright law. You may not copy, distribute, or use this material except as necessary for your personal, non-commercial use. Any trademarks are the properties of their respective owners. More on Hyderabad, India. Jobs in Hyderabad.