The Legend Of Zorro Review 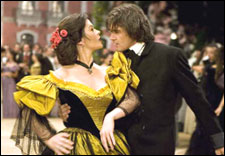 Priyanka Pulla / fullhyd.com
EDITOR RATING
7.5
Performances
Script
Music/Soundtrack
Visuals
NA
NA
NA
NA
Suggestions
Can watch again
NA
Good for kids
NA
Good for dates
NA
Wait for OTT
NA
It’s hard to remember the movie that The Legend Of Zorro is the sequel to. It’s been 7 years after all, since The Mask Of Zorro. But with The Legend Of Zorro, the franchise is so effectively re-invented, that like the handful of fitting sequels that have come out on Hollywood spools, this one gives you a healthy desire to catch the original. And that’s a brilliant, if rare, sign.

Despite all the talk about a waning Banderas looking well past his prime, this Alejandro de la Vega alias Zorro looks much more delectable. He wears his role like he has mellowed and matured in it. If he says to a protesting Elena (Catherine Zeta Jones) who wants him to give up his mask, that “That’s who I am”, ahem… he’s right, ‘cause that’s exactly who he is - Zorro of the black mask and cape, Zorro of the ebony stallion Toronado, Zorro of buffoonish jealousy and indomitable chivalry, Zorro the mighty and inimitable.

Soon enough he proves himself to the feisty Elena and their puckish son Joaquin (Adrian Alonso) who is equally full-of-fight, and is one with that perfect little family. But not before a divorce from Elena, and numerous accusations from pugnacious little Joaquin about what a bad father he is and how he doesn’t care.

So the story this time is that California is about to join the Union, but there is a rag-tag bunch of evil guys, from one scarface with wooden teeth, to a glassy-eyed, manicured French Count, Armand (Rufus Sewell), who has Mogambo-scale plans to blow up Washington DC. He has underground factories and all, but of course, everything is creaking wood, charcoal fires and rusty chains rather than flashy computer consoles showing missiles taking off, this being 1850.

Also Armand is busy wooing the post-pregnancy (in the movie and outside) Elena, who doesn’t look like a mother but has the satisfied radiance of one. Elena has already divorced Alejandro when he refuses to give up his double-life as Zorro, and when he discovers her prancing around in Armand’s arms at a social-do, his flagrant show of drunken jealousy is quite a scream. They dance together; exchanging stinging words, and the grand climax is when Elena smacks him across his enraged face.

Joaquin as the errant young boy and the next Zorro in making, is as cute as a button with his coin-round face and a dimple for his mouth. He is an unabashed admirer of Zorro over his own father, and imitates him by sword fighting with a wooden-ruler against his teacher. Later, of course, he helps his parents in the fight-scenes with a few nimble acrobatics of his own. Terribly reminiscent of Mummy 2.

With Elena spying a little, and Joaquin sneaking in and out like a rat through the bad guys’ habitations, Zorro manages to get the governor to sign the ratification of California’s constitution.

This Zorro has it all; it is a carefully contemplated mix of comedy, action and some breakneck romance. There are the trademark stolen kisses in the middle of smoking fight scenes, and passionate hugs punctuated by the crack of a bullwhip or a smoothly executed somersault.

The Legend Of Zorro is first-rate entertainment this weekend, and it’s all the more reason that you catch it because it may be the last in the franchise that has sexy man Banderas in it. Atleast at his hunky optimum. And of course, beautiful Catherine Zeta Jones too.
Share. Save. Connect.
Tweet
THE LEGEND OF ZORRO SNAPSHOT

ADVERTISEMENT
This page was tagged for
The Legend Of Zorro english movie
The Legend Of Zorro reviews
release date
Catherine Zeta Jones, Antonio Banderas
theatres list
Follow @fullhyderabad
Follow fullhyd.com on
About Hyderabad
The Hyderabad Community
Improve fullhyd.com
More
Our Other Local Guides
Our other sites
© Copyright 1999-2009 LRR Technologies (Hyderabad), Pvt Ltd. All rights reserved. fullhyd, fullhyderabad, Welcome To The Neighbourhood are trademarks of LRR Technologies (Hyderabad) Pvt Ltd. The textual, graphic, audio and audiovisual material in this site is protected by copyright law. You may not copy, distribute, or use this material except as necessary for your personal, non-commercial use. Any trademarks are the properties of their respective owners. More on Hyderabad, India. Jobs in Hyderabad.