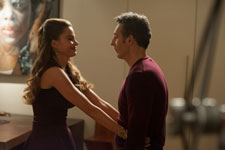 Nupur Barua / fullhyd.com
EDITOR RATING
6.0
Performances
Script
Music/Soundtrack
Visuals
7.0
5.0
6.0
7.0
Suggestions
Can watch again
Yes
Good for kids
No
Good for dates
Yes
Wait for OTT
No
Fading Gigolo is John Turturro's 5th movie as a director. His intention, as he pointed out in an interview last year, was to "draw parallels" between commercial sex and acting - both are services that can be bought when one wants to live out fantasies. A Jewish neighbourhood in New York, where the story is set, can only enhance the repression that leads to loneliness, which is what the movie is all about.

Murray (Woody Allen) is just learning to come to terms with the impending fate of his bookshop that specialises in rare books. His younger friend, Fioravante (John Turturro), manages to make a living by working as a florist, part-time. The two of them have had a strong bond with each other ever since the day Fioravante, as a kid, had tried to rob Murray's store.

After much deliberation and Murray's constant nagging, Fioravante decides to begin with the dermatologist, Dr. Parker (Sharon Stone). He overcomes his reservations when he realises that she is nervous, and thus carves out for himself a career as a part-time gigolo. Murray is happy being the pimp, and splurges on his wife and kids.

Murray provides the women for his friend's trysts, and he realises that the widow of a Chasidic Rabbi needs some prying away from her cloistered world. Her name is Avigal (Vanessa Paradis) and she is as orthodox as the community she lives in. Murray suggests some massage therapy, and takes her to Fioravante. In the session, Avigal suddenly releases pent up tears when Fioravante touches her bare back, and he himself feels a connection.

The real world, however, is not too far away, and Dovi (Liev Schreiber), the community patrolman who has been in love with Avigal, decides to investigate her activities. Murray, who is a liberal member of the same community, may need to answer some questions from the watchdogs of the society, soon. In the meantime, however, Fioravante has to make good his promise to carry out the menage a trois with Dr. Parker and her bored housewife friend, Selima (Sofia Vergara).

The screenplay uses the imagery of crossing the bridge when Avigal sets out to change her life, of her kneading dough to vent her frustration, and of her bare back to bring back life to her bottled-up existence. At times, the metaphors are too literal to be intriguing, but they serve their purpose rather effectively.

What would have helped in the scripting is an explanation of the orthodox Chasidic society, at least, for non-New Yorkers to comprehend. Instead, the narrative treads a fine line between comedy and mockery when these rituals and daily lives are portrayed. Even Murray's relationship with the woman he lives with is not clear. All the humour comes from Murray's dialogues, and a few situations that Dovi finds himself in. The flow is not really smooth, and although the movie is less than 90 minutes in length, it seems never-ending, only because the director overemphasises his point, over and over again.

Woody Allen is, as usual, a delight, but a little subdued from its previous avatars as the bumbling Jew in New York - whether that is due to age or recent controversies, you cannot be sure. His chemistry with John Turturro, however, is crackling. And that is where the movie becomes a bromance, of sorts. John Turturro himself seems slightly inhibited with the portrayal of an aging gigolo, but he maintains a camaraderie with his co-star that will be remembered for years.

Sharon Stone, probably for the first time in her life, portrays a woman nervous about sex. She does such a convincing job in that moment that you can be forgiven for forgetting that her claim to fame began with Basic Instinct. Sofia Vergara tries to be classy, but lacks the conviction. Vanessa Pardis, on the other hand, is mysterious, and you can fall in love with her immediately. As Liev Schrieber does in the movie, and thus enacts the role of a lovesick idiot very well.

Where there is Woody Allen, there is New York, although he is just the actor in this movie. Unlike Allen, Turturro cannot capture the nuances of the city, but he tries. The production design is almost flawless, but the director sticks to the same locales and does not experiment much, even when his characters cross the bridge. The yellow taxi is sorely missed, but the setting of the Chasidic community is well-researched.

The costumes are predictable, but note how Sharon Stone first appears in a gown (as a woman looking for paid sex), and then girly skirts and dresses, to emphasise her high school anxiety, and then skimpy clothes to show her uninhibited nature, liberated by sex.

The music is soulful. The use of the song Sway (both the Spanish and English versions) promises romance and sweetness, but the rest of the music is mostly instrumental, to stress Fioravante's indifference to the other women. The editing is effective, in a way, but it is the script that slows the pace.

Fading Gigolo is a difficult movie to form an opinion on, so we suggest that you find out for yourself whether it is worth exploring themes such as loneliness and prostitution. Depending on your mood, you will either discover the positive message, or come away disappointed in the ambiguous ending. Either way, you would like the chit-chat between Woody Allen and John Turturro.
Share. Save. Connect.
Tweet
FADING GIGOLO SNAPSHOT 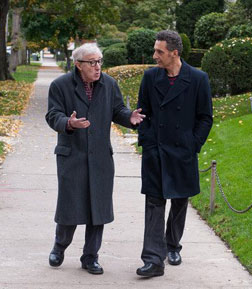 ADVERTISEMENT
This page was tagged for
Fading Gigolo english movie
Fading Gigolo reviews
release date
John Turturro, Woody Allen
theatres list
Follow @fullhyderabad
Follow fullhyd.com on
About Hyderabad
The Hyderabad Community
Improve fullhyd.com
More
Our Other Local Guides
Our other sites
© Copyright 1999-2009 LRR Technologies (Hyderabad), Pvt Ltd. All rights reserved. fullhyd, fullhyderabad, Welcome To The Neighbourhood are trademarks of LRR Technologies (Hyderabad) Pvt Ltd. The textual, graphic, audio and audiovisual material in this site is protected by copyright law. You may not copy, distribute, or use this material except as necessary for your personal, non-commercial use. Any trademarks are the properties of their respective owners. More on Hyderabad, India. Jobs in Hyderabad.