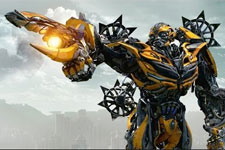 T J Reddy / fullhyd.com
EDITOR RATING
3.0
Performances
Script
Music/Soundtrack
Visuals
3.0
1.0
2.0
8.0
Suggestions
Can watch again
No
Good for kids
No
Good for dates
No
Wait for OTT
Yes
As I booked my tickets to indulge in the next film in Michael Bay's Transformers saga, I knew I had to prepare myself for the intense viewing experience, both physically and mentally. I woke up in the wee hours of the morning and worked out for two straight hours. I made myself a healthy breakfast comprising of oats and berries. I dressed well and coiffed my hair. Finally, I looked into the mirror and told myself, "You will not fall asleep at another Transformers movie. NOT AGAIN."

I made my way to the cinema a few minutes before the screening was about to begin. Not wanting to waste these precious few minutes with mindless staring, I read the room, or more so the lobby, trying to gauge the anticipation of the audience. There were people young and younger (no old person in sight) brimming with enthusiasm waiting to catch the next episode in Optimus Prime's journey. I readily lowered my expectations (as previously resolved) and walked into a hall buzzing with youthful exuberance. 150 minutes later, almost every single soul in that hall had their energy level depleted as it slowly dawned on them that they had been conned into thinking they were witnessing a fun summer blockbuster.

Transformers: Worst Last Name Ever tells the increasingly long-winded story of the ruler of Cybertron Quintessa's attempts at restoring her planet to its former glory by draining Earth's life force. Optimus Prime who left Earth seeking his creator is seemingly, um, transformed to the dark side by Queen Quintessa's magic Camelot-powered staff. Now Public Enemy #1, Nemesis Prime (I'm not joking - that's his actual name), is on a collision course with Earth's mightiest heroes. Can they stop him? Can they find the Optimus inside the Nemisis? Can this plot be made dumb, long, loud and boring? The answer to all those questions is a resounding YES.

You could be forgiven for thinking that the fifth movie of a well-established franchise could break the mould set up for it by its predecessors, owing to modern action classics such as Fast Five and Mission Impossible: Rogue Nation. But what those films have that Transformers doesn't is fresh blood behind the camera with every new release. Transformers: When Will It End is not the absolute worst of the Michael Bay helmed franchise (that honour goes to Age Of Extinction), but its lack of imagination and cohesion are palpable.

It is quite amusing to think that an animated movie from the '80s hilariously titled The Transformers: The Movie did the plot of this film justice. This effort lacks the charm, heart, cohesion and genuine stakes that the aforementioned children's film possessed. And the actors in the film can't essay a convincing performance to save their lives either as they are too busy trying to make sense of their own world that reeks of logical fallacies and scientific inaccuracies.

The solitary saving grace of the film is Mr. Dependable Optimus Prime himself. His presence though significantly brief makes the film's final stretch moderately bearable as his battle with his trusted deputy Bumblebee is cause for celebration and heartbreak. That scene which is fuelled by emotion and not by empty posturing is singular as the film around it overpowers the audience and the film itself via sheer sensory overload.

The cacophonous noise never hits a crescendo, the ADHD edit style cannot muster a scene with any form of build-up or payoff, and the inconsistent screenplay adds fuel to the raging dumpster fire that is this movie. The filmmakers show no aptitude when it comes to telling a story worth paying attention to as the primary objective of the film is to sell the gullible children who found their way into this cinema hall a bunch of new toys and to offer them a clinic on how to lower expectations when it comes to cinema for the foreseeable future.

There is an old adage which goes "a sucker is born every minute". This franchise will milk the money out of those poor sods dry until the skies turns black under the shadow of Cybertron itself.
Share. Save. Connect.
Tweet
TRANSFORMERS: THE LAST KNIGHT SNAPSHOT 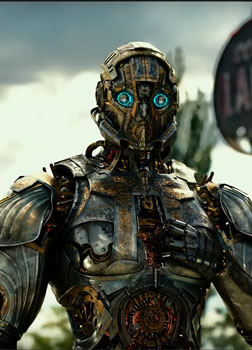 I'm not defending this movie... it's not good. But it's not as bad as described here. (This rating made me write this review for the review)

I don't think it's any fair to send a reviewer who already made up his mind before even entering the theater to review the movie
If the above reviewer had any ethics, he would have passed the opportunity to review this movie which he thinks would already be bad. Or maybe he was influenced already by IMDB ratings
I don't think it's fair to send a reviewer, who thinks transformer movies are sleep-inducing, to review a Transformer movie

Don't do the job just for the sake of doing it. A movie critic should be in love with the movies. He should be sad that a movie is getting a lower rating. He should be angry that a movie disappointed him. And first and foremost, he should not be prejudiced
RATING
5
TJ Reddy on 13th Jul 2017, 10:19am | Permalink
Hello Krishnakanth

I'm TJ Reddy, the person who wrote the review. I'd like to begin by saying I appreciate your sentiment and understand your point of view.

I do agree that Michael Bay has made a bunch of passable to good films which include The Rock, Armageddon, Bad Boys, The Island, 13 Hours and Pain and Gain (to a certain degree). I have no preconceived notions when it comes to watching his films or the Transformers franchise. I quite enjoyed the first movie.

The problem I have with this specific film is its lack of coherence and no modicum of care shown towards filmmaking in general.

I do not subscribe to the opinion that I should lower my expectations to the bare minimum when I pay my money to watch a “blockbuster” film. Some of my favorite films are blockbusters and they rarely, if ever, asked me to do that same. Even if the film is not playing to highest level, I would like it to not insult the audience who took the time out to watch it. The egregious product placement, lack of structure, blatantly unfunny and mildly racist humor is a task to sit through.

I know most people who like this franchise don't mind these gripes but I have to be impartial and put my opinion out there. A review might be the view of one single person but that person has a responsibility, to be honest to his readers. The structure of the review and the personal touch added to it are as such because I wanted to illicit a few laughs from the readers and did not want to make reading said review a drab affair.

I feel no pride in defending my appreciation of the art of cinema as I would not be writing this if I wasn't a film lover.

I concede that my review might not be to your taste or liking but I’m glad to have found a person who shares a similar passion for cinema. No one is ever wrong for liking or disliking film as to any degree as a film itself does not ask for judgement. We imprint our personal experiences and tastes on it and decide its worth.

So, thank you for starting a conversation and I’d like to hear more feedback from you with my future reviews if you please.

P.S. – I was not the reviewer on The Mummy (nor have I seen it) and Transformers: Age of Extinction actually did put me to sleep because my mind could not take the noise anymore (the only film to ever do so).
Josh on 15th Jul 2017, 10:15am | Permalink
There's no need we have to agree, Reddy. But I have decided to weigh in on Kurumeti's opinion.

The way I approach reviewing is I treat it as a dialogue where only one person is speaking. But that person is definitely not speaking to herself. The reviewer speaks to an audience. That audience could be her readership with whom the she already has an understanding. Like in the case of dedicated fora, say a fandom. Or in the case of a neutral site such as Fullhyd.com the audience will have to be the target audience of the film itself. Because the film was made for them. Not me, nor you.

I'm not saying the reviewer has to deny himself. He is after all a part of the conversation. Nonetheless he needs to remember who he is writing to.

So I see a need to attempt some amount of "Parakaya Pravesam" - to get into the shoes of the film's target audience - in order to figure out if the film has some value to them.

Which is why my weakest reviews are superhero films, kid films, and horror films because I simply don't appreciate nor understand the foundation of those films.

The reason for this exposition of opinion is your review does indeed look like it's based on preconceived notions. If you feel obliged to let us know that you worked out two hours straight to handle this film then you are possibly indisposed to pronounce a neutral verdict.

That isn't necessarily right or wrong. That could just be your style. Which is why I didn't comment on the review. However, I do buy Kurumeti's point on the reviewer being able to relate to her film's target audience.

And welcome to the comments section :)
TJ Reddy on 15th Jul 2017, 10:10pm | Permalink
I'm beginning to understand that Josh. Being a new reviewer, I have a lot to learn about the audience on the site. At the end of the day, our job as reviewers is to have an open dialogue with our readers.

ADVERTISEMENT
This page was tagged for
Transformers: The Last Knight english movie
Transformers: The Last Knight reviews
release date
Mark Wahlberg, Anthony Hopkins
theatres list
Follow @fullhyderabad
Follow fullhyd.com on
About Hyderabad
The Hyderabad Community
Improve fullhyd.com
More
Our Other Local Guides
Our other sites
© Copyright 1999-2009 LRR Technologies (Hyderabad), Pvt Ltd. All rights reserved. fullhyd, fullhyderabad, Welcome To The Neighbourhood are trademarks of LRR Technologies (Hyderabad) Pvt Ltd. The textual, graphic, audio and audiovisual material in this site is protected by copyright law. You may not copy, distribute, or use this material except as necessary for your personal, non-commercial use. Any trademarks are the properties of their respective owners. More on Hyderabad, India. Jobs in Hyderabad.