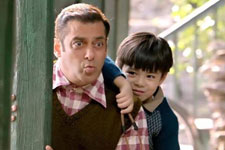 Vaishnavi Kulkarni / fullhyd.com
EDITOR RATING
4.5
Performances
Script
Music/Soundtrack
Visuals
5.0
4.0
5.5
6.0
Suggestions
Can watch again
No
Good for kids
No
Good for dates
No
Wait for OTT
Yes
Salman Khan has mastered the art of making money. After spending his younger years smiling, dancing and flirting his way into the hearts of Indian viewers with his boyish charm and universal appeal, he is now in possession of the power to make films that have absolutely nothing to recommend themselves by and still earn the big bucks.

In Tubelight, Khan plays a character (Laxman) who is half the actor's real age, and acts about as well as a teenager who is a quarter of it, in a script so lazily written that it exploits every single movie-ending cliché for viewer emotions and resorts to below-the-belt humour with the writers' minds in the gutter - quite literally: the jokes are almost entirely comprised of either people asking Laxman to zip his fly or toilet-related gags (and gag, you will).

And yet, with cries of "Bharat Mata Ki Jai" in the film resounding with the general atmosphere of patriotic fervour in the country today, soldiers fighting in a war, a whispered message of peace and secularism that is conveniently lost amidst all the gunfire, and an homage to the teachings of Gandhiji thrown in for good measure, Tubelight is a recipe for packed theatres on the opening weekend. Add to that the cult of followers who value Bhai-ity over quality, and you can practically hear the chink of gold filling the superstar's pockets.

The film begins in the years leading up to 1947, and shows brothers Laxman (Salman Khan) and Bharat (Sohail Khan), orphaned at an early age, living in the beautiful mountain village of Jagatpur, Kumaon. Under the care of Banne Chacha (Om Puri), they grow to be good men. The rest, as they occasionally say, is borrowed from history - India is at war with China in the post-independence turmoil, and the army needs troops. Bharat, devoted to his older brother, decides to heed Chacha's advice and enlist in the army to earn a pension and provide for Laxman.

Off goes Bharat, and the void in Laxman's life is filled by a mother-son duo of Chinese ancestry, who have made India their home for three generations. Encouraged by Chacha, Laxman befriends the pair, much to the disgust of the local bully Narayan (Mohammed Ayyub). The events that unfold are so predictable as they occur that you find yourself mouthing words before they are said - perhaps even making a guessing game out of it to alleviate the boredom of the lethargic storyline.

Tubelight is the unfortunate nickname bestowed upon the specially-abled Laxman when he is a boy by school children being their typical, cruel selves. And the plot of the film is much like the eponymous character - it is simple, straightforward, well-intentioned and good at heart, but is slow to advance and takes far too long to get to the point, sometimes lacking one entirely.

The movie has a few favourite buzzwords. Tubelight, the title, is used as a metaphor that is beaten to death with how much it is expounded upon. Gandhiji and his teachings are brought into play over and over, often applied willy-nilly. The worst, however, is the word "yakeen" (Hindi for "faith") which is uttered at least a hundred times through the course of the film, and is used around a dozen times in a single monologue. Laxman is told to believe in himself and have faith in his ability to bring about change, which is admirable - if only he was also taught to do something other than concentrating so hard that he appears constipated.

For a movie so obsessed with faith, Tubelight sure casts more shadows (of doubt) than it brightens. The messages it doles out freely and generously are confusing at best and terrible at worst - that blind belief and superstition win out over scientific facts and logic, that simply hoping without taking any action magically fetches results, and that it is okay for a lifelong bully and racist to almost murder a man for looking different and get away with it after hardly a few punches of come-uppance.

The musical score, while featuring some good melodies if heard on their own, has such a surplus of songs that the movie begins to feel like a cross between Forrest Gump and La La Land, though not a fraction as good as either. The cinematography, though beautiful with its picturesque shots of the lush beauty of Kumaon and the dusty, gritty visuals of war, is marred by the unnecessary slow-motion effects.

Salman Khan's portrayal of a mentally-challenged, sensitive young man is abysmal. He appears to believe that speaking like a child, pursing his lips and widening his eyes is sufficient to play the part. His acting is exaggerated and fake for the most part. He manages to strike a chord in you at rare moments, but the script draws these out for so long that they lose all consequence.

Sohail Khan is a good fit for his uncomplicated role, as the strong, responsible and loving brother and as the tough army man. Om Puri, may he rest in peace, makes a wonderful Chacha - gruff but sweet, and strict and yet caring, he is the one character you really like. Mohammed Ayyub manages to make you hate him, and plays the character of the local jerk whose full-time occupation is tormenting people (we're serious - the guy needs to get a job) as well as he possibly could.

Unless you are a fan of Bhai who has yakeen in the entertainment value of Salman Khan's face, it would be wise to skip this one. This Tubelight may leave you in a darker mood than Lights Out ever could. 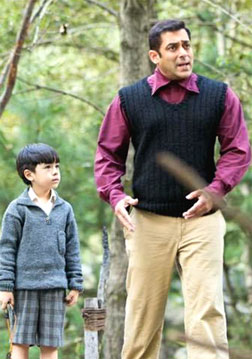 ADVERTISEMENT
This page was tagged for
Tubelight hindi movie
Tubelight reviews
release date
Salman Khan, Sohail Khan
theatres list
Follow @fullhyderabad
Follow fullhyd.com on
About Hyderabad
The Hyderabad Community
Improve fullhyd.com
More
Our Other Local Guides
Our other sites
© Copyright 1999-2009 LRR Technologies (Hyderabad), Pvt Ltd. All rights reserved. fullhyd, fullhyderabad, Welcome To The Neighbourhood are trademarks of LRR Technologies (Hyderabad) Pvt Ltd. The textual, graphic, audio and audiovisual material in this site is protected by copyright law. You may not copy, distribute, or use this material except as necessary for your personal, non-commercial use. Any trademarks are the properties of their respective owners. More on Hyderabad, India. Jobs in Hyderabad.