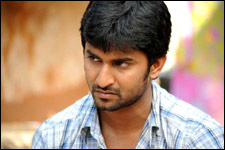 Deepa Garimella / fullhyd.com
EDITOR RATING
6.5
Performances
Script
Music/Soundtrack
Visuals
9.0
6.5
6.5
7.5
Suggestions
Can watch again
Yes
Good for kids
Yes
Good for dates
Yes
Wait to rent it
No
If you've ever cringed any time a visibly ageing M S Narayana is, in the name of comedy, repetitively subjected to jokes on height, looks or eye bags, you may want to watch Pilla Zamindar. Because among the many pleasant surprises this film tosses at you is an M S who is finally given his due. But enough of elderly comedians already.

Pilla Zamindar is a film that has finished delighting with its mere premise, by its mere promise. Somewhere between an art film and commercial cinema, this is one among those productions brought about by the fast emerging fresh, new blood in Telugu cinema.

This story of a little world and its large triumphs is the kind that exhilarates you with its every discovery of human truth (however obvious-sounding). It is designed to be a emoti-comedy, and is basically the journey of PJ aka Praveen (Naani), a rich heir, from arrogance to humility. PJ's dead grandfather (Nagineedu) has denied him access to his fortune until he fulfills some conditions and lives in a certain way.

Hence, the transition to village life, where PJ has to not just study and get good grades, but also demonstrate that he can be a decent human being. Hating being thwacked on the wrist like this, PJ grudgingly goes about life in his village, where, he eventually learns, "God meant for us to use things and love people, but we humans use people and love things". And many other truisms to similar effect.

Praveen's soul-cleansing journey is like that in any other "message-oriented" film, but the director's old-school perfectionism to individual scenes, combined with new-age edginess, gives Pilla Zamindar a neatness of form that cannot be faulted.

The sharp editing and quick cuts give the movie an ad-film feel, and the dialogues match up to the standards set by the slick cinematography. Plenty of heart has clearly gone into the writing, and the movie is spot on in handling emotional scenes - like the one after PJ beats his friend (Srinivas Avasarala) up. We wouldn't be surprised if this film wins a few awards somewhere.

Yes, there are places where a joke is dragged out or where a bad PJ is passed off as a clever pun, but overall, the film also has an uncluttered approach to telling the story. There is also the issue of the film shedding its comedy and fun tone in the first half and becoming all sentimental post interval.

Naani, some will argue, does not have the charisma of the bigger stars, but his increasing fan base is well-deserved, and the faith his loyals have in him hardly misplaced. In Pilla Zamindar, he has the opportunity to explore several emotions, and he does with characteristic effortlessness. There is also a hint of a good filmmaker in him, since he comes across as an actor who understands audiences as well as he understands emotion or comedy.

For Naani's Ashta Chemma co-star Srinivas Avasarala, who has mostly had bad films to act in post his debut, Pilla Zamindar is his best career decision after Ashta Chemma. And he lives up to it in a rather pivotal role in PJ. Taagubothu Ramesh (who is finally not playing drunk, but not for too long), Dhanraj and Rao Ramesh do well in the meaningful roles they are given. And of course, there is MS playing a Telugu teacher who vows to never let Telugu die. It's not an earth-shattering role, but one that he finally, finally deserves as an actor.

Of the women, Hari Priya sadly has not much to do, while Bindu Madhavi grins her way through the songs.

Meanwhile the songs disappoint. Most of them are diversions and do not have memorable tunes either.

We at fullhyd.com do love our Puri Jagannaths and V V Vinayaks, but Pilla Zamindar deserves a watch, especially by anyone who wishes Telugu cinema could have a little more variety.
Share. Save. Connect.
Tweet
PILLA ZAMINDAR SNAPSHOT

See Pilla Zamindar full details
PILLA ZAMINDAR USER REVIEWS
1 - 3 OF 3 COMMENTS
POSITIVE  |  NEGATIVE |  NEWEST  |  OLDEST  |  MOST HELPFUL  |  LEAST HELPFUL
USER RATING
7.0
1 USER
Performances
Script
Music/Soundtrack
Visuals
NA
NA
NA
NA
Can watch again - NA
Good for kids - NA
Good for dates - NA
Wait to rent it - NA
Pasya on 4th May 2014, 12:23am | Permalink
"For Naani's Ashta Chemma co-star Srinivas Avasarala, who has mostly had bad films to act in post his debut, Pilla Zamindar is his best career decision after Ashta Chemma. And he lives up to it in a rather pivotal role in PJ. "
-Naani is PJ in the movie. Srinivas A. is Kanna Babu, FYI.
Guest on 23rd Sep 2013, 12:46am | Permalink
One of the best movies in the recent times.
Sidharth on 28th Oct 2011, 9:52am | Permalink
Movie is good.

Amazing first half (must watch 4.5/5)
Decent story based second half (can watch 3/5)

Go watch and laugh out loud.

ADVERTISEMENT
This page was tagged for
lelu zamindar script
Pilla Zamindar telugu movie
Pilla Zamindar reviews
release date
Naani, Hari Priya
Follow @fullhyderabad
Follow fullhyd.com on
About Hyderabad
The Hyderabad Community
Improve fullhyd.com
More
Our Other Local Guides
Our other sites
© Copyright 1999-2009 LRR Technologies (Hyderabad), Pvt Ltd. All rights reserved. fullhyd, fullhyderabad, Welcome To The Neighbourhood are trademarks of LRR Technologies (Hyderabad) Pvt Ltd. The textual, graphic, audio and audiovisual material in this site is protected by copyright law. You may not copy, distribute, or use this material except as necessary for your personal, non-commercial use. Any trademarks are the properties of their respective owners. More on Hyderabad, India. Jobs in Hyderabad.