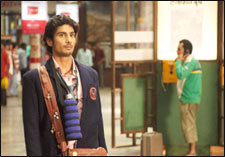 Nupur Barua / fullhyd.com
EDITOR RATING
2.0
Performances
Script
Music/Soundtrack
Visuals
5.0
3.0
4.0
5.0
Suggestions
Can watch again
No
Good for kids
No
Good for dates
No
Wait to rent it
No
Sanjay Leela Bhansali (also known as Blue/Black Bhansali in certain circles) is known for his larger-than-life canvases and melancholy-themed long movies. So imagine the collective gasp of surprise from fans and peers alike when he suddenly decided to turn producer, and that too with a comedy that does not boast of big stars.

By his own admission, he is not creatively bent towards comedies and the like, but he thinks that they deserve to be made. The script of My Friend Pinto reportedly made him laugh, and so Bhansali made his debut as a producer, with UTV Motion Pictures as a partner.

The story goes like this. Sameer (Arjun Mathur) and Michael Pinto (Prateik) are childhood friends, which is explained in the title montage (of a single photograph's various elements). Now Sameer, who has more than 700 friends on Facebook but has not bothered to read Michael's handwritten letters for years, lives in Mumbai with his ambitious wife Suhani (Shruti Seth).

So when Michael's local priest in decides to send the former to spend some time with Sameer, it becomes inconvenient for the urban couple. Besides, it is New Year's Eve, and there are parties to attend, and so on.

Anyway, they leave the bumbling Michael alone in the apartment and go out. Just when you expect this to become a case of Home Alone, the director surprises us by locking Michael out on the balcony, and the movie begins its downhill journey.

Everything happens in that one night, when Michael meets a train of characters conveniently connected with each other (so you know they will all be there for the climax). As Sameer and gang are stuck in a traffic jam, Michael meets criminals and gamblers, rides a scooter, falls in love, makes new friends, plays various instruments, gets robbed, rescues a dog, and is almost seduced. And he is not harmed at all.

The inspiration for Michael seems to have come from Raj Kapoor and Charlie Chaplin - a naive buffoon incredibly unaffected by the evil that is latent in the city. In case he does not seem unrealistic enough, the filmmakers add to the outdated protagonist a touch of Forrest Gump - most of his dialogues begin with a quote from his recently-dead mother, forever changing the life of every person he meets.

This is Prateik's first film as a solo hero, and also the first where he does not use his father's surname. In fact, in a recent interview, he admitted that his surname was Smit when he was in school (after his mother).

Prateik has also been in the news for his vow of celibacy, at least till the film's release (this led to dependence on alcohol, by the way). Sex or no sex, he needs to brush up on his acting skills a bit, as this movie proves.

Prateik's high-pitched voice, coupled with what he thinks is his dazzlingly innocent/raw grin, makes him seem ridiculous. Even if you are willing to suspend your disbelief in the existence of a simpleton like Michael Pinto, Prateik is definitely not the guy to convince you, and he does not. His language is reminiscent of all the Goan/Catholic characters that were popular in older Hindi movies, but does nothing for Michael's character.

The movie is filled with stereotypes. Mallu Don Narayanan (Makrand Deshpande) wears a hat, shirt, waistcoat, coat and tie, with a (hold your breath) dhoti. He speaks with an accent that seems neither Tamil nor Malayalam, but then, who cares about the difference as long as it is funny? To give him some credit, he is the only actor, besides Arjun Mathur, who seems sincere in the movie.

Failed actress Reshma (Divya Dutta) is the Don's wife, who loves her drink, so you can imagine the overacting involved. Actually, everybody else overacts, and Kalki is disinterested. A special mention must be made of the Hajee twins, who try, but direction is shoddy, so there goes the double-role humour.

My Friend Pinto belongs to the slapstick genre, but a few forced tee-hees are all that you can manage. The hotchpotch is not funny, and you will be able to take short naps at regular intervals (there is nothing to stop you from taking frequent loo/popcorn breaks either). The production design has Bhansali's detailing (read: "surreal"), but the music, the other aspect that the director-producer is renowned for, falls flat on its face.

Completely avoidable, My Friend Pinto offends your senses and intellect more than last week's Rascals. Just rent a DVD of Forrest Gump or Shree 420, the movies in which actors act and elicit genuine laughter, and the music of which remains unforgettable.
Share. Save. Connect.
Tweet
MY FRIEND PINTO SNAPSHOT

ADVERTISEMENT
This page was tagged for
My Friend Pinto hindi movie
My Friend Pinto reviews
release date
Prateik, Arjun Mathur
theatres list
Follow @fullhyderabad
Follow fullhyd.com on
About Hyderabad
The Hyderabad Community
Improve fullhyd.com
More
Our Other Local Guides
Our other sites
© Copyright 1999-2009 LRR Technologies (Hyderabad), Pvt Ltd. All rights reserved. fullhyd, fullhyderabad, Welcome To The Neighbourhood are trademarks of LRR Technologies (Hyderabad) Pvt Ltd. The textual, graphic, audio and audiovisual material in this site is protected by copyright law. You may not copy, distribute, or use this material except as necessary for your personal, non-commercial use. Any trademarks are the properties of their respective owners. More on Hyderabad, India. Jobs in Hyderabad.