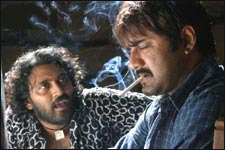 Krishna KBS / fullhyd.com
EDITOR RATING
5.0
Performances
Script
Music/Soundtrack
Visuals
NA
NA
NA
NA
Suggestions
Can watch again
NA
Good for kids
NA
Good for dates
NA
Wait to rent it
NA
Of the numerous things that disappoint you about Nagaram, screenplay takes the cake. There is a scene in the second half of the film, where a character nonchalantly shuffles the various pictures of guys and girls that are sent to the marriage bureau, and matches them accordingly. Evidently, it's done to generate comedy; but the director seems to have done the same with the various scenes that he himself had, and hence serves up a jumble as a film.

Nagaram, as the title proclaims, is set in a city, and is about corruption - with a capital C. The movie starts with a terse scene which doesn't make any sense, and then rolls back a year. However, the flashback takes about 90% of the film, and you are left to wonder why the director didn't do a straight chronological job. Probably that's also due to the jumbling or shuffling that Sreenivas indulges in.

Right (Srikanth) is a rowdy who is feared by almost everybody. A college girl (Kaveri Jha), meanwhile, sets out researching rowdies and their lifestyle. When a beautiful girl like her takes such a decision, you are forced to ask yourself why only blondes are supposed to be brainless bimbettes. In view of the fact that the heroine falls in love with Right later on in the film after seeing that he isn't scared when she shoots a pot that is next to him, you have to admit that the belief about blondes is just racist and nothing else.

Right falls foul of a bigger rowdy Quasim Bhai (Pradeep Rawat), and decides to turn a new leaf. He opens a marriage bureau for the eternal hopefuls - or, in other words, those whose first experience of marriage hadn't taught them that optimism is good, but in small doses. The movie meanders from then on, and ends tamely and expectedly.

Jagapathi Babu plays the role of ACP Choudhary, an honest cop with an impractical goal of making the city crime-free. I have nothing against that - only, goals such as these result in one being kicked around, and as the movie grinds to a complete halt after he's transferred, you just wish that the ACP had more sense and kept himself away from such lofty targets.

The actors perform decently, with Jagapathi being the best of the lot. Indeed, when a character in a special role in a movie has better lines and better scenes than the one in the lead, you can wonder why the movie was not made with that actor in the central role. Srikanth's character is almost mute - the total number of lines that he gets to say in the movie makes you wonder if the "strong and silent" cliché isn't taken a tad too far.

The movie borrows heavily from Ram Gopal Varma's Company, and the climax is taken from Sarkar - and the director adds Matrix-style special effects in the last fight, to give you something to laugh at. Come to think of it, even the heroine's character is modeled on Bhagyashree's role in Upendra's Om.

No, we have nothing against being inspired - but imitation is basically plagiarism. And when the movies from which Sreenivas borrows liberally are aired regularly on TV, why does one need venture to a theater?
Share. Save. Connect.
Tweet
NAGARAM SNAPSHOT

ADVERTISEMENT
This page was tagged for
Nagaram telugu movie
Nagaram reviews
release date
Srikanth, Jagapathi Babu
theatres list
Follow @fullhyderabad
Follow fullhyd.com on
About Hyderabad
The Hyderabad Community
Improve fullhyd.com
More
Our Other Local Guides
Our other sites
© Copyright 1999-2009 LRR Technologies (Hyderabad), Pvt Ltd. All rights reserved. fullhyd, fullhyderabad, Welcome To The Neighbourhood are trademarks of LRR Technologies (Hyderabad) Pvt Ltd. The textual, graphic, audio and audiovisual material in this site is protected by copyright law. You may not copy, distribute, or use this material except as necessary for your personal, non-commercial use. Any trademarks are the properties of their respective owners. More on Hyderabad, India. Jobs in Hyderabad.