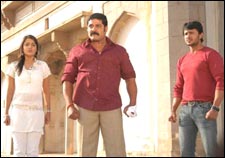 Krishna KBS / fullhyd.com
EDITOR RATING
5.0
Performances
Script
Music/Soundtrack
Visuals
NA
NA
NA
NA
Suggestions
Can watch again
NA
Good for kids
NA
Good for dates
NA
Wait for OTT
NA
Men don't cry, goes an old adage, in all probability a stereotype. However, we have grown up on stereotypes, and so we feel queasy when we see a man crying. And when the man in question is Srihari, who is built like a tank, the queasiness multiplies exponentially. But the question that we need to ask ourselves is whether such tenderness on the part of a macho hero is welcome. On watching Bhadradri, that's for a good part made sensibly and sensitively, the answer seems "yes".

Bhadradri is a movie out of the John Grisham genre. Corruption, exploitation, and the wilful behaviour of industrialists, are presented in an interesting manner. However, as the film is in Telugu, and the target audience demands the use of fists rather than verbal jousts in a courtroom, the protagonist is a He-Man rather than a lawyer.

Raghuram (Srihari) hails from Bhadradri, where all the villagers revere him. And as all of them seem to suffer from some unknown disease except for Raghuram, you are left to wonder if the respect isn't born out of fear. His younger brother (Raja) is studying in a medical college in the city, and Raghuram keeps telling everyone who cares to listen (which is just about everyone in the movie) that his brother is going to come and solve the problems of the village with his medical expertise.

As his brother is whiling away his time drinking beer and wooing the daughter (Nikita) of the health minister, you are left to marvel at his naïve optimism, and wait patiently for the inevitable clash between the brothers when Raghuram lets go of his blindfold. In fact, we wouldn't be wrong to assume that it's a modern day remake of the early Chiranjeevi starrer Ooriki Icchina Maata.

However, Mallikarjun springs a major surprise at the interval, and keeps the interest in the proceedings alive. It turns out that Nexgen Labs had used the people of the village as guinea pigs to try out a new medicine that they have come up with, on the eve of a blowout. As the head of the industry (Mukesh Rishi) and the health minister (Jai Prakash Reddy) are hand in glove, it pans out that the protagonists are out to get justice for the village.

The way this is done is presented in a rather novel manner, though it does stretch credibility. But by then the viewer has gotten so involved in the proceedings that even if the director had decided to show Srihari using his enviable muscles to stop the World Trade Center from collapsing, there would hardly be an iota of doubt on the faces of the audience.

All the actors do justice to their roles, and it's a blessing to find a movie these days which doesn't indulge in parody to generate comedy, thus masking the creative drought in the writers. The screenplay is interesting, though it could be tighter - and frankly, it's not as tough as one would assume, considering that deleting a couple of songs would do wonders for the pace of the movie, and reduce the length by a good 10 minutes.

Unless you are in the Maneka Gandhi mould and believe that it's better to use humans as guinea pigs, you can watch the film without having fundamental differences with it. Bhadradri is a movie with a message - if only the message wasn't massaged into you so much. But then, you can't have everything.
Share. Save. Connect.
Tweet
BHADRADRI SNAPSHOT

ADVERTISEMENT
This page was tagged for
Bhadradri telugu movie
Bhadradri reviews
release date
Sri Hari, Raja
theatres list
Follow @fullhyderabad
Follow fullhyd.com on
About Hyderabad
The Hyderabad Community
Improve fullhyd.com
More
Our Other Local Guides
Our other sites
© Copyright 1999-2009 LRR Technologies (Hyderabad), Pvt Ltd. All rights reserved. fullhyd, fullhyderabad, Welcome To The Neighbourhood are trademarks of LRR Technologies (Hyderabad) Pvt Ltd. The textual, graphic, audio and audiovisual material in this site is protected by copyright law. You may not copy, distribute, or use this material except as necessary for your personal, non-commercial use. Any trademarks are the properties of their respective owners. More on Hyderabad, India. Jobs in Hyderabad.