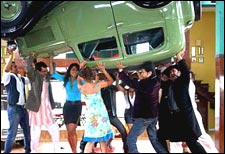 Samrat Sharma / fullhyd.com
EDITOR RATING
3.0
Performances
Script
Music/Soundtrack
Visuals
NA
NA
NA
NA
Suggestions
Can watch again
NA
Good for kids
NA
Good for dates
NA
Wait to rent it
NA
Do yourself a favor, will you? Don't go watch One Two Three. I mean it, don't. Because if this movie makes any money, it will be living proof that insipid comedies are what the audiences want, and you'll have to sit through another dozen or so this year. I wish this was about the only text in this review I had to write, so as not to legitimize the film.

But I do suppose you have to make up your own minds about whether a film is worth your time and money. Allright then, here we go: the titular One Two Three are three men named Laxmi Narayan, who end up in the same hotel for some work, and the name confusion sends them in wrong directions. Hilarity, or what passes for it ensues.

The hijinx here are solely reliant on the different occupations of the three leads, leading the rest of the film and cast in the 'plot'. Laxmi Narayan #1 is Tusshar Kapoor, a wannabe mafioso whose mother wants him badly to become a hitman. #2 is Sunil Shetty, a docile and idiotic 9-to-5er. #3 is Paresh Rawal, an underwear salesman, who has earned a lot of money and now wants to grow into a 'lingeries' business.

They each get pointed to the wrong people: Tusshar gets to a lingerie designer, Sunil gets to the bhai, a bhai so big that he is called 'Papa' (Mukesh Tiwari), and Paresh gets to a car saleswoman, ready to drop her clothes if you so much as breathe. Thrown in are Chandu and Chandni (Upen Patel and an increasingly skimpily clad Tanisha Mukherjee), who have hidden Papa's diamonds in the car, and a hot-headed cop Mayawati (Neetu Chandra), who is funny because... I don't know, she speaks in a Jat dialect?

Whatever. The film is not the kind you want to make sense of, but the least you expect is a film you can laugh with, or barring even those small mercies, laugh at. It falls short on all those counts, simply because the film is made with utter contempt for you and me. Director Ashwani Dheer hates all of us - or at least that is what I gathered. The film is made with the firm belief that all Hindi film audiences looking for a few laughs have bad taste, and just love clichéd loud comedy.

There are a couple of gags here and there that seem inspired, and say what you will, Mukesh Tiwari actually has developed a keen sense of comic timing. But these are small mercies in a film where the each gag, each contrived plot twist is dragged way beyond the point when it stops being funny. The cast has been handpicked for what they do best - the three main men have some comic flair of renown, and all the ladies are known to shed clothing, which is a good thing when you want to sell a film.

Okay, I get that. That's the cost of making a commercial film: you have to hard-sell it. But what are you selling, by Jove? Beyond the commercial trappings and the 15-minute concept pitch that is the mistaken identity routine, the movie is an empty, vacuous, vapid excuse for a film, shoveled at us because March brings with it a dearth of films.

I could go on and on about how the cinematography is actually quite painful, and how the music by Raghav Sachar is cool, yet used extremely badly. I could lament the lack of acting talent in the most of the film's cast, or the lack of directorial ambition on part of Dheer, but that is redundant at this point. This is a B-grade film absolutely meant to be terrible. Try and keep your cash flow it to a minimal. If you watch a similar film in the next 2 years, it'd be too soon.
Share. Save. Connect.
Tweet
ONE TWO THREE SNAPSHOT

ADVERTISEMENT
This page was tagged for
one two three movie sammera reddy
One Two Three hindi movie
One Two Three reviews
release date
Sunil Shetty, Tusshar Kapoor
Follow @fullhyderabad
Follow fullhyd.com on
About Hyderabad
The Hyderabad Community
Improve fullhyd.com
More
Our Other Local Guides
Our other sites
© Copyright 1999-2009 LRR Technologies (Hyderabad), Pvt Ltd. All rights reserved. fullhyd, fullhyderabad, Welcome To The Neighbourhood are trademarks of LRR Technologies (Hyderabad) Pvt Ltd. The textual, graphic, audio and audiovisual material in this site is protected by copyright law. You may not copy, distribute, or use this material except as necessary for your personal, non-commercial use. Any trademarks are the properties of their respective owners. More on Hyderabad, India. Jobs in Hyderabad.