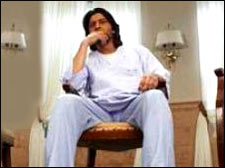 EDITOR RATING
3.0
Performances
Script
Music/Soundtrack
Visuals
NA
NA
NA
NA
Suggestions
Can watch again
NA
Good for kids
NA
Good for dates
NA
Wait to rent it
NA
Hi. I'm Raja. I've been in a mental asylum for the past 4 years. It can be quite easy to forget while watching a comedy movie, how extraordinarily traumatic the experiences that drive people to insanity are. Fortunately for you, we make sure that by the end of Krazzy 4, you have had exactly such an experience.

Indeed, it takes guts to make a movie with 4 mentally imbalanced people in the lead. And it takes a million such people who can be persuaded to watch a movie like this so that we get our money back. Since we can't bet that there are a million such people in the country, we work to ensure that we have repeat audiences. You'd have seen enough movies where people who've lost their sanity get it back when they encounter the same devastating situation again. We work on the same concept - the only way to get back to normal after watching this one is watching it again.

Like I said, Krazzy 4 is the story of 4 mentally imbalanced people, each with a different behaviour. I, for instance, have an anger problem. For example, I give one solid slap to my girlfriend's father when he unwittingly blows smoke on my face (from a cigarette, in case you are wondering where he produced the smoke from). Yes, I agree that it was really wrong - he shouldn't have done it. But Maya (Dia Mirza) nevertheless breaks up with me, and I get into the asylum for rehab.

With me are Dabboo (Suresh Menon), Mukherjee (Irrfan Khan) and Gangadhar (Rajpal Yadav). Mukherjee is a doctor who's so obsessed about cleanliness, he'd ask God to take a bath first before talking to him. Gangadhar is a Gandhian who thinks it is still 1947, which is not surprising since our movie does look like it was made for audiences of that time. And Dabboo is dumb, thus coming out with the performance that has the least impact on you, which in the case of this movie is a blessing.

Dr. Sonali (Juhi Chawla), a young pyschiatrist entrusted with us, believes that she should take us out of the asylum to help us improve, which is usually a bad idea. How many people do you know who should be in a mental asylum but are outside? Okay, forget I asked that. Anyway, she arranges a trip for us to watch a cricket match, but gets kidnapped on the way there when she leaves the car to step into her clinic for a bit.

Well, this is a big jolt to us, since she was a really good doctor who was slowly curing us, since she made sure the asylum treated us well, and mostly since we don't have a driver now. Normally, you'd think this would make for a lot of fun - 4 semi-loose people on the streets. Well, let's just say this is the poor man's version of one of your Telugu TV serials. So it's a little slower, and you'll find the jokes quite funny if you're the kind who gets turned on by the sight of an oozing blister.

The first half ends at roughly the same time as your patience does, but luckily we have a plan - the 2 item songs by SRK and Hrithik, which we show great foresight in putting in the second half. At just a little over 2 hours, this is a short movie, and sometimes we feel it could've been much shorter. About the time that 2 songs take, to be precise.

Anyway, the second half has us all working together to rescue Sonali, but unless you have a policy of attempting in your personal life the second half of every movie you see, you are mostly not much worse off.

I'd say I found it fruitful being in this movie. I have kept getting really angry and abusing and hitting people all my life, and now it's the other way round with all the people who see this, so it's a just payoff for my sins. As for the others, Irrfan Khan has been getting rave reviews for all his work over the last couple of years, and this wipes all that out, so it's a just payoff there, too. Rajpal Yadav hopefully is Gandhian in real life, too, since he'll need a lot of equanimity whenever he thinks of this movie. Suresh Menon, fortunately, is unknown anyway, and unfortunately, will perhaps always be if any filmmaker sees this film.

Some of you might have heard of the fracas over Rakesh Roshan stealing the music for the title song and then denying it. I'd say that misses the bigger point. Imagine what he'd have to go through if it were found out that he stole this script. And then had to actually pay Rs. 2 crores or whatever for it after a court ruling.

I'd say you should watch this movie. If not for anything else, then at least as a gesture of solidarity towards the people who have already watched it. Anyway, it's been nice talking to you - I have reached the word limit this site's editors gave me. The movie, however, hasn't; it ends with "To Be Continued..." I hope you're still around, but my money is on my producer.
Share. Save. Connect.
Tweet
KRAZZY 4 SNAPSHOT

See Krazzy 4 full details
KRAZZY 4 USER REVIEWS
1 - 8 OF 8 COMMENTS
POSITIVE  |  NEGATIVE |  NEWEST  |  OLDEST  |  MOST HELPFUL  |  LEAST HELPFUL
USER RATING
6.0
16 USERS
Performances
Script
Music/Soundtrack
Visuals
5.5
4.8
5.5
4.7
Can watch again - No
Good for kids - Unsure
Good for dates - Unsure
Wait to rent it - No
yrsandeep on 25th Apr 2008, 12:04pm | Permalink
if i had any reason to go to this movie it would only be to watch hrithik's dance
Raghavsantu on 24th Apr 2008, 11:48pm | Permalink
hrithik must have pulled many crowds to theater but he was not able to pull back the people leaving theater....
RATING
3
Phaneendra Pappu on 23rd Apr 2008, 11:52am | Permalink
Actually the film is based on a hollywood flick called "The Dream Team". That was a better movie and this is bitter. Thats the only difference...
RATING
5
rangss on 22nd Apr 2008, 11:02pm | Permalink
Years ago there was a Telugu movie made with Jagapathi babu, Suresh, Raghuvaran and Sudhakar and Nirosha (doctor) called Asadhyulu The script of Krazzy 4 is exactly same as this movie.


Pros: Can't see any
Cons: too many

Ravi U on 21st Apr 2008, 10:33am | Permalink
Review is very nice... can we have the name of the reviewr?
Krishna on 20th Apr 2008, 9:36pm | Permalink
ok-ok types. Expected much more. The title song is definitely lifted shamelessly from the Sony Ericsson "The thump is here" jingle featuring Hrithik.

ADVERTISEMENT
This page was tagged for
Krazzy 4 hindi movie
Krazzy 4 reviews
release date
Arshad Warsi, Irrfan Khan
theatres list
Follow @fullhyderabad
Follow fullhyd.com on
About Hyderabad
The Hyderabad Community
Improve fullhyd.com
More
Our Other Local Guides
Our other sites
© Copyright 1999-2009 LRR Technologies (Hyderabad), Pvt Ltd. All rights reserved. fullhyd, fullhyderabad, Welcome To The Neighbourhood are trademarks of LRR Technologies (Hyderabad) Pvt Ltd. The textual, graphic, audio and audiovisual material in this site is protected by copyright law. You may not copy, distribute, or use this material except as necessary for your personal, non-commercial use. Any trademarks are the properties of their respective owners. More on Hyderabad, India. Jobs in Hyderabad.