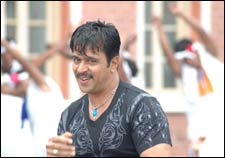 Ravi Mundoli / fullhyd.com
EDITOR RATING
3.0
Performances
Script
Music/Soundtrack
Visuals
NA
NA
NA
NA
Suggestions
Can watch again
NA
Good for kids
NA
Good for dates
NA
Wait to rent it
NA
It can't entirely be a coincidence that the Indian Army's main battle tank is named Arjun. The similarities between the weapon and the actor are uncanny. Both look squat and powerful without appearing fat. Both have to be prepared for the worst kinds of terrain and conditions; desert and battlefield for the one and assembly constituencies and politicians for the other.

Alas, both are occasionally known to fire duds. If Singamalai doesn't blow up spectacularly in your face, it is mainly because in the first place you didn't have great expectations when you walked into the theater. The posters show the main battle tank in a banian with a rope twisted around one forearm and a stick in the other, and you know what you're in for.

Singamalai (Arjun) is the son of a conscientious policeman (Nasser), and himself a newly inducted constable. He is posted to the Narayanapuram police station, where all is not as it should be. The Narayanapuram Assembly constituency has not seen an election in 16 years, thanks to the extra-curricular activities of Bhaji (Lal), local don and numero uno.

Every attempt to conduct elections is thwarted by Bhaji, and the horrors pile up until they almost become the last straw that breaks the camel's back. The camel in this case turns out to be the suitably dramatic Chief Election Commissioner Suryanarayana (Raghuvaran).

Suryanarayana lands up in town and goes about trying to conduct the election by giving people civics lectures in that trademark baritone of his. Because they can't stand his voice any more, some of the hapless citizenry gives in and agrees to contest the polls.

Meanwhile, Singamalai is learning the ropes under the tutelage of 'Encounter' Ekambaram (Vadivelu). He also manages to meet his neighbour Divya (Nila) by contriving to place himself between her and the ground when she falls off a ladder. There can be no further doubts about it. It appears that the Government of India has not only made item numbers mandatory in our films, but also made it a statutory requirement that when heroine meets hero, it cannot be without at least one (preferably three) 'bump' sequence.

When Bhaji beats up his father at a polling booth, Singamalai reveals his true colors and bludgeons Bhaji's henchmen into unconsciousness. The gusto with which he wields the wooden club is enough to convince you that in some previous life, Singamalai was a dhobi with personality issues.

He then strips (literally) Bhaji of his dignity and throws him in jail. In the process, the sound effects also give us advance warning that we should run for the nearest medical store during the interval and buy earplugs for part two, if we intend leaving the theater with eardrums intact.

Singamalai is an 'idli and sambar' film for Arjun, to coin a phrase. It has pretty much all the basic stuff in place - a comedy track, decorative women, a villain you'll love to hate, and enough bone-crushing action to send a hospital emergency room into rapture.

Just about the only thing that may be out of character for Arjun is that he is an active participant in the comedy in Singamalai, and titters at himself a few times. Vadivelu starts off being as funny as usual, but then enters the nether regions. There's hardly any time or inclination to build up the romance between the boy (okay, the Incredible Hulk of a South-Indian Man) and the girl, and zero room for over the top melodrama.

All said and done, Singamalai is a run-of-the-mill flick which you will want to see in the theater only if you're in the mood to turn loose the front-bencher inside you. Otherwise you can safely wait for the cable TV edition, which will be cheaper, and easier on those eardrums.
Share. Save. Connect.
Tweet
SINGAMALAI SNAPSHOT

ADVERTISEMENT
This page was tagged for
singamalai wiki
singamalai movie
singamalai telugu movie
singamalai Telugu movies full
Telugu singamalai 2 movie
Follow @fullhyderabad
Follow fullhyd.com on
About Hyderabad
The Hyderabad Community
Improve fullhyd.com
More
Our Other Local Guides
Our other sites
© Copyright 1999-2009 LRR Technologies (Hyderabad), Pvt Ltd. All rights reserved. fullhyd, fullhyderabad, Welcome To The Neighbourhood are trademarks of LRR Technologies (Hyderabad) Pvt Ltd. The textual, graphic, audio and audiovisual material in this site is protected by copyright law. You may not copy, distribute, or use this material except as necessary for your personal, non-commercial use. Any trademarks are the properties of their respective owners. More on Hyderabad, India. Jobs in Hyderabad.