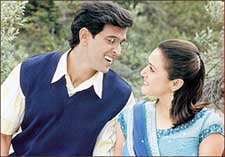 Don't beam me up, Scottie... not just yet. They still make some good movies down here. Yup, "good"... that's the only adjective that can be used to qualify Koi... Mil Gaya. It's not first-class, it's not imaginative and it's definitely not intelligent... but boy, it's rollickingly, endearingly, huggable-y GOOD.

When a Bollywood filmmaker (famed for movies about returning-from-the-dead, reincarnation et al), forays into virgin territory like sci-fi, what should you expect? Clueless? Okay, more hints... he throws in text-book Bollywood essentials like songs, exotic locales, a love story, a loving mom and a bunch of baddies. And to make it just a little "different", he features computers, a UFO and an alien. You're beginning to think - oh God... this is like ET gone bad... or like X-Files meets Indian soaps... or help, Isaac Asimov meets Tinkle.

But, the filmmaker has an ace up his sleeve, and he draws it out just in time to save Koi... Mil Gaya from drowning in the Sea Of Tranquility. The ace is called Hrithik Roshan, and he transforms the film from an insipid, no-brainer to a really GOOD movie.

The story... well, yay! There is some semblance of a story here. Rakesh Roshan is a scientist who, with a small dish antenna and a crude computer, manages to do what rocket-scientists, astronomers and even NASA with its trillions of dollars couldn't - he contacts aliens from a distant galaxy.

No one believes him except his wife (Rekha), and before he can fiddle around some more, he dies in a car-crash. Pregnant Rekha survives, delivers a baby boy and moves to India to settle down in Kasauli. Her son Rohit (Hrithik), who suffers a head injury while still a foetus, grows up to be a 10-year-old in a man's body (and oh... what a body!).

He studies in "seventh standard", plays cricket and rides a scooter around town with his little pals. He also gets bullied by baddies and discomfited by his teachers. But the adorable little boy that he is, he bounces back and tries twice as hard to be accepted.

When Nisha (Preity Zinta) comes to town, the two begin to bond after a few hiccups. While messing around with his dad's 20-year old computer, they manage to contact the same aliens (not even a dish antenna required this time, just one of those aerials from the 1980s). The UFO lands and leaves behind a rather familiar looking alien - in a costume was probably a discard from Mars Attacks or some such flick. 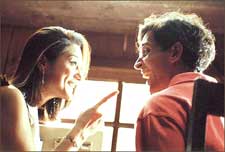 How the friendly alien meets Rohit and his friends and changes his life forever forms the rest of the story. In the few days that Jadoo (that's the name they came up with for the alien) spends on Earth, it manages to learn to quaff down a can of Coke, watch TV, speak a few words in Hindi and even sing a song - could this happen anywhere but in Bollywood?

The movie is a tad long at three hours. Sequences like the one where the kids play basketball vs. the baddies (with tacky special effects) is rather painful on the eye. There is one superfluous song and all the supposedly technical stuff about sound-waves and extra-terrestrial life is utterly duh.

But, hey, this one is a showcase for Hrithik Roshan - and NOT for animation or effects. He puts in his best performance since KNPH - he's original, innocent and uninhibited. There are scenes when you can laugh at him and scenes when you can laugh with him. There are even scenes when he'll make your eyes mist up just a little bit. And of course, there are the scenes of his transformation where he oozes a completely different kind of sex-appeal. He isn't Hrithik Roshan in the movie - he is Rohit, the differently-abled child-man who gets a magical chance to do all that he dreamt of. 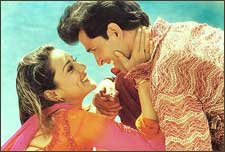 Preity Zinta is perfectly cast as Rohit's friend - who humors him at first but slowly finds herself giving in to his endearing ways. Rekha plays a caring mom sans the usual sentiment. The kids who play Rohit's friends are a treat to watch - they are genuinely funny. And the alien, well, it's likeable, but perhaps it would take a few more attempts by Bollywood to create a more imaginative creature. But Jadoo will be a winner with the kiddie moviegoers.

The choreography is in tune with Hrithik's character. He forgoes his usual macho routines for some catchy, difficult albeit awkward moves. And the songs are treat - especially Idhar Chala and It's Magic. And Rohit's classroom sequences and the moment when the chemistry begins to build between him and Nisha are memorable.

Don't expect too much from the movie and don't analyze it too much, and you'll definitely enjoy it. Koi... Mil Gaya has all it takes to be a success. If Roshan Sr. offers a senior citizens' discount on tickets to all the 10+ year-olds, there's bound to be a windfall at the box-office. Even if the movie doesn't work, it'd go down in history as the world's first ever fantasy/sci-fi/romantic/musical/comedy/action flick.
Share. Save. Connect.
Tweet
KOI MIL GAYA SNAPSHOT
See Koi Mil Gaya full details
KOI MIL GAYA USER REVIEWS
1 - 14 OF 14 COMMENTS
POSITIVE  |  NEGATIVE |  NEWEST  |  OLDEST  |  MOST HELPFUL  |  LEAST HELPFUL
USER RATING
8.0
155 USERS
Performances
Script
Music/Soundtrack
Visuals
NA
NA
NA
NA
Can watch again - NA
Good for kids - NA
Good for dates - NA
Wait to rent it - NA
Neela Khan on 30th Sep 2006, 5:48pm | Permalink
i love u Hrithik u r da best
RATING
10
Rani Mukherjee on 6th Mar 2004, 11:05pm | Permalink
i love you
RATING
10
Radhika Chatterji on 20th Sep 2003, 5:50pm | Permalink
Excellent perfomance by Hrithik. Please make KMG part 2.
RATING
10
Devanshi Patel on 31st Aug 2003, 7:51pm | Permalink
The alien should not have gone back. Make me and my friends meet the alien.
RATING
10
Rakesh Prasad on 24th Aug 2003, 5:36am | Permalink
I am die-hard fan of Hritik. But 'Koi Mil Gaya' disappointed me. Hritik tends to overact in some scenes. That's my opinion. The story resembled that of a Walt Disney cartoon. Forgive me, but that's what many of my friends said. But I took the strain of watching the movie 5 times just for the sake of seeing Hritik and the 'Koi Mil Gaya' song. Whether Hritik overacted or not, he will always be loved by us. He's got the most innocent face I've ever seen. Priety was cute in the movie.
RATING
8
Ara Ansari on 22nd Aug 2003, 11:17pm | Permalink
The film is pure GOLD for Rakesh Roshan. It's minting gold for him from all over the world and his son has proved to be the proverbial "ALLAUDDIN KA CHIRAGH" in that process. It's back to back gold, like Olympic Gold medals:


First KHNPH and now KMG and Rakesh is grinning/laughing all the way to the bank. It has collected more than $480,362 in USA for far according to USBO reports, and thats not an ordinary feat for Rakesh Roshan who's still new to this side of North America. He should continue to strive for better stories, direction and extract better performances from his actors in the future. It's all about "nothing succeeds like success".

Now Hrithik, you must take roles that have a lot of depth and scope to perform. You should be extremely careful and selective about your future roles, and not accept anything that comes your way. You've proved your mettle, now don't do stupid films and undo the acclaim and the trust, you've won. Pick and choose stories that are different and showcase your talent in each of them, and remember, variety is the spice of life. And Hrithik, please do only 2 films a year and don't overexpose yourself - that'll be suicidal to your career. Look at Dilip saab's career graph and follow his doctrine: One film a year.

I want you to shine like Balraj Sahni, Dilip Saab and Sanjeev Kumar forever and ever. You must study these veterans' work by watching their films, study every bit of their acting in each frame and trust me, you'll learn a lot from them.


All the best to you for the future.


RATING
8
Jadoo Jadoo on 11th Aug 2003, 2:47pm | Permalink
This is MY movie. So, it has to be good. :-)
RATING
10
J D on 10th Aug 2003, 11:04pm | Permalink
Hrithik proves again and again that he's got the skills. Plus, the movie is a fresh change from all the same subjects that have we have been seeing. Definitely worth a watch!
RATING
8
K Kapoor on 10th Aug 2003, 1:24am | Permalink
Oops, I didn't mean it negatively! I mean... it's a little long but I loved it, and actually the part where the baddies bully Hrithik was emotional - and each time they hurt him, it's very painful to watch. So I felt there's too much of Hrithik bashing in the film.

All in all it's an excellent film and it should be appreciated by masses both in India and abroad.
RATING
8
Katrina Kaif on 9th Aug 2003, 9:54pm | Permalink
Hrithik is very good, the movie is an entertainer alright.

RATING
8
K Kapoor on 9th Aug 2003, 9:39pm | Permalink
Hrithik was truly good in this movie. It's a bit long for my taste with too many songs, and Rajat Bedi bullying him went a little too far. And why basketball of all the sports in the world? And talking basketball teams reminds me of New York Knicks and LA Lakers games.

However, the movie is a solid entertainer even for 170 mins.

ADVERTISEMENT
This page was tagged for
koi mil gaya movie song
koi mil gaya full movie in hindi
pretty zinta di film koi mil gaya
Koi Mil Gaya Full Movies HDTRip
koi mil gaya full movie
Follow @fullhyderabad
Follow fullhyd.com on
About Hyderabad
The Hyderabad Community
Improve fullhyd.com
More
Our Other Local Guides
Our other sites
© Copyright 1999-2009 LRR Technologies (Hyderabad), Pvt Ltd. All rights reserved. fullhyd, fullhyderabad, Welcome To The Neighbourhood are trademarks of LRR Technologies (Hyderabad) Pvt Ltd. The textual, graphic, audio and audiovisual material in this site is protected by copyright law. You may not copy, distribute, or use this material except as necessary for your personal, non-commercial use. Any trademarks are the properties of their respective owners. More on Hyderabad, India. Jobs in Hyderabad.