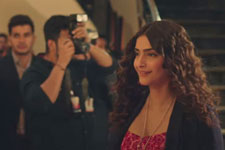 Neema Pramod / fullhyd.com
EDITOR RATING
6.0
Performances
Script
Music/Soundtrack
Visuals
6.0
3.5
5.5
7.0
Suggestions
Can watch again
No
Good for kids
Yes
Good for dates
Yes
Wait for OTT
No
Meet Zoya Singh Solanki. She is sick of her job at the advertising agency, has just been dumped by her dentist boyfriend, and is bristling at a power cut in her house that happened just when she was ogling at the hot cricketer in that Diary Milk ad on TV. Her father and brother dote on her, yet tease her mercilessly. She is overly cautious of spending money, and almost always says the wrong thing at the wrong time. In short, a typical simple, middle-class girl who could be anyone you know, or even you yourself.

This is the Zoya Singh Solanki that was the protagonist of Anuja Chauhan's 2008 novel The Zoya Factor, the one on which this movie is based. Unfortunately, it is Sonam Ahuja who the film picks as its Zoya, and she just does not look the part - with her wardrobe that seems to have been sourced directly from the sets of Aisha, and her flawless appearance even when she is in her own living room. Not one strand of hair is out of place, not one fingernail is chipped.

Zoya was born on the day India won it first World Cup, and ever since then she has been considered "lucky for cricket". Though she dislikes the sport, the tag had never affected her. Until, on her first big photo shoot with the Indian cricket team, she casually mentions this at the breakfast table. The same day, the team wins their first match in a long time. When more victories follow each time the team has breakfast with Zoya, and not eating with her leads to defeat - they brand her as a lucky charm.

And suddenly Zoya finds herself being plucked out of her ordinary life and placed at the centre of the world, where the Indian team, the paparazzi and the big brands are all vying for her attention in the World Cup season. In the midst of all this hullabaloo is the supremely handsome Nikhil Khoda (Dulquer Salmaan), the captain of the Indian cricket team, who does not believe in luck, yet cannot help but be taken in by this chit of a girl. How Zoya navigates though this new-found fame and romance is what The Zoya Factor is all about.

At the core of The Zoya Factor lies an intriguing premise. Religion (and superstitions) and cricket are the two biggest obsessions in our country (followed closely by cinema), so when the two inter-mingle, the consequences can be mind-boggling at best and dangerous at worst. The Zoya Factor could have made for a sharp yet rib-tackling satire with its central theme, and a couple of scenes do deliver in that regard. It is amusing to see the alarming ease with which superstitions are created and upheld. The conflict between talent and luck is also portrayed an interesting manner, and the irony of casting star kids like Sonam and Dulquer in a film that argues against nepotism cannot be missed. But unfortunately, the rest of the movie isn't as interested in milking this premise, and is content with being your usual fluffy rom-com with two diametrically opposite people finding love in each other.

This is not to say that a fluffy rom-com is bad. A rom-com, if done well, can bring a goofy grin on your face and warm the cockles of your heart. The problem is that this predictable specimen of the genre does nothing to feel fresh or original. The conversations between Zoya and Nikhil are as cheesy as they come, and the romantic moments between them are nothing but a series of clichés, right from the meet-cute to the final reunion.

Nevertheless, Dulquer's irresistible charm, viewed through the lens of the female gaze adopted by this film, makes these portions soar. The corniest of lines roll out of his tongue so smoothly that it can thaw the coldest of hearts. The man has already proven his mettle in far more complex roles in Malayalam, Tamil and Telugu cinema, and he is no less potent here. His imbues Nikhil with the right mix of cockiness and vulnerability, which makes him a delight to watch on screen.

The same cannot be said for his co-star, however, which is disappointing because this is supposed to be her film. Sonam has a great eye for interesting scripts, but if only she knew how to act in them. Her Zoya is awfully grating, and therefore it comes as no surprise when the focus of the movie slowly shifts from Zoya to Nikhil as it progresses, relegating her to the sidelines despite the promise her character held. You can't help but wonder how the film would have turned out had it had a better actress at the centre.

That said, her lack of acting skills doesn't make the film unwatchable. On the contrary, The Zoya Factor is actually an enjoyable little film with some great gags, delivered by the talented bunch of supporting cast members. Sanjay Kapoor and Sikandar Kher are full of warmth as Zoya's father and brother respectively, but it is the actors in the Indian team which that are the highlight. The one who sings while playing to get his "rhythm" is a hoot, and so is the one who has to look at the photograph of his grandfather to calm himself down when agitated. Angad Bedi is good, too, as the scheming villain. A special mention for the two cricket commentators - they had the audience falling of their chairs.

Technically, the film offers nothing to marvel about, but is easy on the eyes. The same can be said for Shankar-Ehsaan-Loy's music - nothing wonderful but pleasant on the ears. This reviewer is not qualified to comment on the staging of the cricket portions, but they were definitely interesting enough for someone who doesn't know the C of Cricket like yours truly.

Overall, The Zoya Factor is an endearingly fun film, despite the poor performance by Sonam, and is worth watching once for the premise and the few but good laughs. Though it doesn't do complete justice to its wacky premise, it does enough to keep you amused throughout its 136 minutes. And for the ladies, there is Dulquer Salmaan flaunting his six-packs and his charm like there is no tomorrow.
Share. Save. Connect.
Tweet
THE ZOYA FACTOR SNAPSHOT 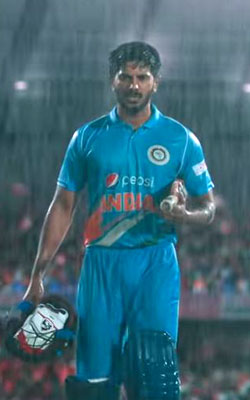 ADVERTISEMENT
This page was tagged for
zoya factor review fullhyderabad
The Zoya Factor hindi movie
The Zoya Factor reviews
release date
Sonam K Ahuja, Dulquer Salmaan
Follow @fullhyderabad
Follow fullhyd.com on
About Hyderabad
The Hyderabad Community
Improve fullhyd.com
More
Our Other Local Guides
Our other sites
© Copyright 1999-2009 LRR Technologies (Hyderabad), Pvt Ltd. All rights reserved. fullhyd, fullhyderabad, Welcome To The Neighbourhood are trademarks of LRR Technologies (Hyderabad) Pvt Ltd. The textual, graphic, audio and audiovisual material in this site is protected by copyright law. You may not copy, distribute, or use this material except as necessary for your personal, non-commercial use. Any trademarks are the properties of their respective owners. More on Hyderabad, India. Jobs in Hyderabad.