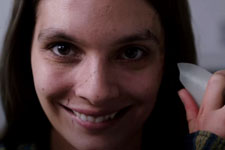 Sai Tulasi Neppali / fullhyd.com
EDITOR RATING
8.0
Performances
Script
Music/Soundtrack
Visuals
8.0
7.0
9.0
9.0
Suggestions
Can watch again
Yes
Good for kids
No
Good for dates
No
Wait for OTT
No
A young lady walks into a psychiatrist's office complaining of seeing faces - faces that are smiling at her. Terrible things happen when she sees these faces, but to her frustration, nobody else can see them. The psychiatrist, Dr. Rose (Sosie Bacon), is used to seeing patients like her every day - those who talk to themselves, have vivid hallucinations, or suffer from mental breakdowns. So Rose doesn't exactly believe the young lady's story about a supernatural force that feeds on trauma.

Then something bizarre happens: the patient jumps off the chair and grabs a shard from a broken vase. Slowly and as calmly as if she were slicing into a birthday cake, the patient cuts her own throat and drops dead. And all the while as she commits suicide, her face is plastered with a singular expression - the biggest, creepiest, most sadistic smile that you've ever seen.

A smile - that sweet, happy display of human elation - is distorted into an object of terror in this psychological horror. "If you see the smile, it is already too late", read the film's posters. The movie's viral marketing campaign had young women stationed at the home plate seats during televised baseball games, with chilling smiles on their faces. So by the time you make it to the theatre, you might be aware that the film's scariest jump cuts won't be about ghosts or gore but grins. Still, nothing quite prepares you for that first jumpscare when Dr. Rose sees the disturbing silhouette of the Smile herself.

Soon Rose is seeing that Smile everywhere - at her workplace, in her kitchen, and during the birthday party of her nephew where the Smile takes the form of her dead patient (Laura Weaver) dressed in a sunny yellow polka-dot dress. Rose's life spirals out of control. She confides in her fiance (Jessie T. Usher) and her therapist (Robin Weigert), but they think she is losing it. Only her ex-boyfriend, Joel (Kyle Gallner), believes that something more sinister and real is at play.

The anticipation of a horrible ending - as Rose gets more and more consumed by the Smile - is so tightly woven into the screenplay that it relies less and less on scare tactics to get our pulses racing. The few scares it does have are so unpredictable and masterfully crafted that the audience's shrieks of terror echo far into the later scenes.

Cristobal Tapia De Veer's ominous and cunning background score tricks you into bracing for a fright, only to reveal something harmless. And other times, during the most ordinary circumstances, the music turns sonorous and the visuals strike straight a spear into the heart, and the old terror creeps up once again.

Sosie Bacon (Kevin Bacon's daughter) delivers a career-highlighting performance as Rose. When you first see her, she is the picture of dignity and confidence: her hair is neatly packed into a bun and her loose silk blouse hangs breezily on her petite body. But as the Smile takes hold, she deteriorates like a wilting bloom - her eyes red and her hair disheveled? beyond the point of recognition.

Sosie brings a visceral quality to Rose's panic and fear as she navigates the world around her, not knowing when and in what form the Smile will appear next. Charlie Sarroff's cinematography takes us inside her skin, the camera staying close to her as her picture-perfect life - the contemporary house, successful fiance, and respectable job - falls apart.

By the end, there are no safe spaces in which to hide and catch your breath. Parts of the movie unfold like a detective mystery. But the finale pays off in the most stunning, perverted, hardcore fashion. And ties in neatly with a secret trauma that Rose has carried with her all her life.

Smile uses an almost algorithmic precision to time its jumpscares to deliver us jolts of adrenaline. But it does have bits and moments where the screenplay sags, and the tension is overextended. And as the last scene abruptly ends, there is a feeling that a lot has been left on the table for the benefit of a sequel.
Share. Save. Connect.
Tweet
SMILE SNAPSHOT 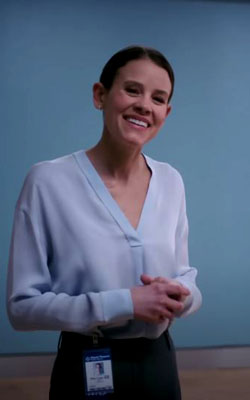 ADVERTISEMENT
This page was tagged for
Smile english movie
Smile reviews
release date
Sosie Bacon, Jessie T. Usher
theatres list
Follow @fullhyderabad
Follow fullhyd.com on
About Hyderabad
The Hyderabad Community
Improve fullhyd.com
More
Our Other Local Guides
Our other sites
© Copyright 1999-2009 LRR Technologies (Hyderabad), Pvt Ltd. All rights reserved. fullhyd, fullhyderabad, Welcome To The Neighbourhood are trademarks of LRR Technologies (Hyderabad) Pvt Ltd. The textual, graphic, audio and audiovisual material in this site is protected by copyright law. You may not copy, distribute, or use this material except as necessary for your personal, non-commercial use. Any trademarks are the properties of their respective owners. More on Hyderabad, India. Jobs in Hyderabad.