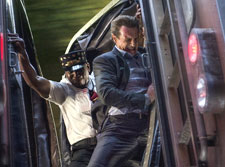 Daphne Rose / fullhyd.com
EDITOR RATING
7.0
Performances
Script
Music/Soundtrack
Visuals
8.0
6.0
7.0
8.0
Suggestions
Can watch again
Yes
Good for kids
Yes
Good for dates
Yes
Wait for OTT
No
Watching The Commuter, you get the distinct sense that this Liam Neeson starrer is akin to that Olympic athlete who stopped just inches short of the finish line to look over his shoulder, only to be overtaken and... well, we all know how that story ended.

That's precisely what goes wrong with The Commuter, too.

Don't get us wrong - this Liam Neeson starrer is enjoyable fare. After an accidental foray into the action movie genre with the cult-hit Taken, Neeson has spawned his own genre of action movies starring him as the dependable, do-gooder, family-man type who has the audience eating out of his hand every time he's on screen, plotline and logic be damned.

Here, too, Neeson takes you down familiar roads as Michael MacCauley, an ex-cop turned insurance agent and the cookie-cutter dependable, do-gooder, family-man type. The first five minutes of the film take you through a montage of sequences describing Michael's idyllic, if somewhat boring, life, that are visually stunning and raise high expectations from things to come.

The scene then shifts to his daily commute to work where his gaze amusingly rests on the various people he encounters aboard the train everyday - some familiar, some unknown - in a set-piece that makes you wonder if the movie isn't set aboard a local train chugging around in Navi Mumbai and not New York. Expecting yet another routine day in his life, our man sets off to work, where he's in for a rude surprise that throws his life into disarray. Old, dejected and at his wits' end, he's met by a mysterious woman on the train ride back who decides to play a little game with him: of the 16 personality types that exist within human society, and aboard the train, identify the one that she seeks and walk away with a 100,000 dollars, no questions asked.

But if only life were that simple. And if only Michael's mother had taught him not to speak with strangers.

Intrigued and in dire need of money, he decides to take her up on her offer, with no idea of the devastating consequences that wait for him and those around him right around the corner. The rest of the film then follows Michael as he tries to extricate himself from the black widow's trap and show everyone that even at over 60 he can throw a punch just as mean as the ones he used to a decade ago.

The fantastic thing about the movie in one word is Neeson. It matters not that the lead of this particular action movie is a 65-year-old whose age clearly shows, for he makes every frame of the movie that he's part of, count. Whether it's him landing kicks and punches, drowning his sorrows at the bar, or just standing tall as the weight of the world washes over him, he makes you feel for him as you would for your own father.

The supporting cast, too, do their jobs well, and are believable in their everyday-man characters. The action pieces are great, and the fight choreographers deserve applause for designing the sequences around the lead minus any age- and gravity-defying theatrics. Special mention to the camerawork that does a mean job of making you want to turn your face away at times for fear of something hitting you with all that action happening at such close quarters. There is one scene in particular with Neeson stuck between the train and the rails that you must absolutely watch out for.

Where then does the movie falter? Well, in making a film such as this, the director-actor duo of Jaume Collet-Serra and Liam Neeson unwittingly (or not) give you a rehash of just about all three of the movies they've made together earlier. Compare The Commuter to their previous collaboration Non Stop and you'll find that the storyline is more or less similar with the only difference being that the action seems to have shifted from an airplane to a train.

Also, while the manner in which the mystery lady approaches Michael and makes him the offer teems with possibilities for an avant garde thriller, the director chooses to ultimately go down a time-tested rabbit hole of the garden variety and not the Alice In Wonderland-inspired Shutter Island / Inception kind. Plus, by the time the movie gets to the second half, it abandons all pretense of a highbrow thriller and goes back to familiar terrain to give the audience what it thinks they seem to want, gift-wrapped with a bow and all.

Watch The Commuter for what may just be Liam Neeson's last time on-screen as an action hero, but oh, what a glorious ride it could have been, if only.
Share. Save. Connect.
Tweet
THE COMMUTER SNAPSHOT 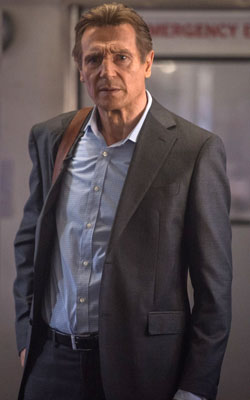 ADVERTISEMENT
This page was tagged for
The Commuter english movie
The Commuter reviews
release date
Liam Neeson, Vera Farmiga
theatres list
Follow @fullhyderabad
Follow fullhyd.com on
About Hyderabad
The Hyderabad Community
Improve fullhyd.com
More
Our Other Local Guides
Our other sites
© Copyright 1999-2009 LRR Technologies (Hyderabad), Pvt Ltd. All rights reserved. fullhyd, fullhyderabad, Welcome To The Neighbourhood are trademarks of LRR Technologies (Hyderabad) Pvt Ltd. The textual, graphic, audio and audiovisual material in this site is protected by copyright law. You may not copy, distribute, or use this material except as necessary for your personal, non-commercial use. Any trademarks are the properties of their respective owners. More on Hyderabad, India. Jobs in Hyderabad.