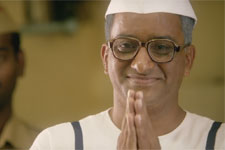 Jaiwantika Dutta-Dhupkar / fullhyd.com
EDITOR RATING
4.0
Performances
Script
Music/Soundtrack
Visuals
7.0
4.0
4.0
5.0
Suggestions
Can watch again
No
Good for kids
No
Good for dates
No
Wait to rent it
No
How much you'll enjoy watching a film like Anna depends upon how much you cared for Anna Hazare's Satyagraha-inspired Lokpal movement. This film has very little Gandhi, however. It's a biography of Anna Hazare, and it tries to tell you how he was a reformer since the day he was born, as convincingly as possible.

The film traces the metamorphosis of Kisan Baburao Hazare and the incidents in his life that led him to become the social reformer that he is today, and merges fact and fiction to make for an interesting watch. Hazare's fight against injustice and corruption starts early as a young boy. He is inspired to join the Army and does so despite being conventionally "unfit" to be a jawan; once there, however, the death and destruction all around him begin to take their toll on him, and he seeks other ways to serve the nation.

A failed suicide attempt and a book on Vivekananda later, he is inspired to adopt the entire world as his family and commit to lifelong celibacy. Hazare's developmental streak shows up first in his own village, Ralegaon Siddhi, which is reeling under a cruel drought and the side-effects thereof. Hazare invokes the villagers' spirit of "shraamdaan" or volunteerism to develop the village. When the officials act difficult, he goes on hunger strikes, which prove to be an effective method of handling the red tape. The film also celebrates his Lokpal struggle for the nation to a good extent.

Hazare talks about using anarchist methods in a civil state and makes them sound good - but the truth is that a democratically elected Indian government isn't a British colonizer, and while Gandhi's methods were wonderful, there is always the possibility of misusing those concepts, like with anything else. The film argues that police atrocities deserve movements like Anna's Satyagraha, but it never shows Hazare approaching the courts or filing a PIL. The public euphoria over Anna Hazare is tremendous, though, and you wish the spirit of volunteerism had seriously been ingrained in the Indian psyche by this charismatic old man.

The film is directed well, but it breaks into a song and dance at odd times, which is funny. The performances are good and the movie seems to have a rather good cast. The cinematography is about average, but makes for easy viewing.

Anna is a confused film as far as law and order is concerned - it borders on boring, because Anna Hazare isn't your average debonair gun-toting, serial-killing rebel. He's this uncle-type anarchist who talks about Gandhi and co. Also, the film doesn't really delve into his mind - it just records events in a chronological order with some fiction for a Pleasant Viewing Experience.

Is Anna then a Pleasant Viewing Experience? Let's just say there are better films to watch this week.
Share. Save. Connect.
Tweet
ANNA (HINDI) SNAPSHOT 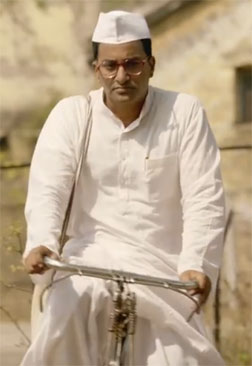 ADVERTISEMENT
This page was tagged for
Anna (Hindi) hindi movie
Anna (Hindi) reviews
release date
Shashank Udapurkar, Tanisha Mukerji
theatres list
Follow @fullhyderabad
Follow fullhyd.com on
About Hyderabad
The Hyderabad Community
Improve fullhyd.com
More
Our Other Local Guides
Our other sites
© Copyright 1999-2009 LRR Technologies (Hyderabad), Pvt Ltd. All rights reserved. fullhyd, fullhyderabad, Welcome To The Neighbourhood are trademarks of LRR Technologies (Hyderabad) Pvt Ltd. The textual, graphic, audio and audiovisual material in this site is protected by copyright law. You may not copy, distribute, or use this material except as necessary for your personal, non-commercial use. Any trademarks are the properties of their respective owners. More on Hyderabad, India. Jobs in Hyderabad.