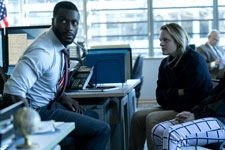 Kritika Deval / fullhyd.com
EDITOR RATING
5.0
Performances
Script
Music/Soundtrack
Visuals
7.0
3.0
6.0
6.0
Suggestions
Can watch again
No
Good for kids
No
Good for dates
Yes
Wait to rent it
No
Once upon a time, this writer was a little girl reading books that were probably inadvisable, then clinging to her mother as she sought protection from the phantoms that inhabited the periphery of her line of sight, and The Invisible Man by H G Wells was one such book. It was the story of a scientist who turned himself invisible but didn't know how to turn back, and who became more and more violent as the physical limitations of humanity no longer restrained him. It was thrilling and thought-provoking, and had many, many big words. The Invisible Man, the movie, is not that story no matter how much it wants us to believe that it is. The only thing the two have in common is a man who is invisible and commits violence. The film begins promisingly, with Cecelia (Elisabeth Moss) escaping her abusive tech magnate husband Adrian (Oliver Jackson-Cohen) in the nick of time in a scene strung taut with tension. She then seeks shelter with a childhood friend (Aldis Hodge) and his daughter Sydney (Storm Reid). About five minutes into Moss being great at portraying PTSD, she receives news that her husband has committed suicide and has left her with piles of cash. There. A POS (Piece Of S**t) is dead. The intrepid heroine gets her reward. And they live happily ever after. Just kidding. For a while there, Cecelia jumps at shadows, and we get subtle scares that appear tangible to her alone. We, too, sat at the edges of our seats, wondering whether this occult assailant exists, or if he's just a figment of the imagination of our understandably trepid heroine. It's just getting good, when out of nowhere we, the viewers, get confirmation of the invisible person (because we're still pretending we don't know their identity at this point) in the most clichéd horror film scene ever when something unseen removes Cecelia's blanket as she sleeps. This is about half an hour into the movie, and the central puzzle with which most viewers were tantalised into the theatre is solved, just like that. As the movie goes on, the invisible person keeps shattering the life that Cecelia built after her escape, in increasingly violent ways - setting food on fire, sending fraudulent emails, hitting young girls, etc. - and making it seem like she's the one responsible. The question then becomes - who's the one doing all this? Which is far less interesting than - is any of this happening at all? For a genre characterised by eloquent demonstrations of fear, The Invisible Man suffers from a bad case of "tell, don't show", as the narrative keeps getting interrupted by out-of-place verbal explanations of the mechanics of domestic abuse, which is both a sign of mediocre writing and entirely immersion breaking. Most of the rating owes itself to Elisabeth Moss being a stellar act who can only be so bad before she starts making the whole thing better just by virtue of being her. Then, too, she has a history of poignant portrayals of victims of gender-based abuse. Storm Reid is sweet, and the only other actor on screen with charisma. Oliver Jackson-Cohen and Michael Dorman make no attempts at hiding their villainy. Aldis Hodge and Harriet Dyer are there so Moss can have someone to talk at. The visuals are well-constructed, and give us a good idea of what a scene was meant to do in the hands of a better director. And the sound is a good mix of ominous sound and ominous silence. There are enough good things about this film that we probably would've liked it slightly better had it been titled "An" Invisible Man. As it stands, though, The Invisible Man is only good for an afternoon's entertainment on SyFy.
Share. Save. Connect.
Tweet
THE INVISIBLE MAN SNAPSHOT 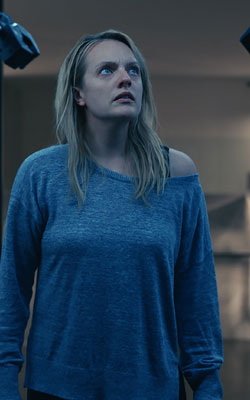 ADVERTISEMENT
This page was tagged for
The Invisible Man english movie
The Invisible Man reviews
release date
Elisabeth Moss, Oliver Jackson-Cohen
theatres list
Follow @fullhyderabad
Follow fullhyd.com on
About Hyderabad
The Hyderabad Community
Improve fullhyd.com
More
Our Other Local Guides
Our other sites
© Copyright 1999-2009 LRR Technologies (Hyderabad), Pvt Ltd. All rights reserved. fullhyd, fullhyderabad, Welcome To The Neighbourhood are trademarks of LRR Technologies (Hyderabad) Pvt Ltd. The textual, graphic, audio and audiovisual material in this site is protected by copyright law. You may not copy, distribute, or use this material except as necessary for your personal, non-commercial use. Any trademarks are the properties of their respective owners. More on Hyderabad, India. Jobs in Hyderabad.