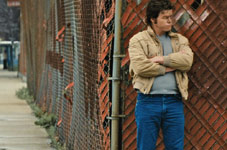 Josh / fullhyd.com
EDITOR RATING
6.0
Performances
Script
Music/Soundtrack
Visuals
7.0
6.0
7.0
7.0
Suggestions
Can watch again
No
Good for kids
No
Good for dates
No
Wait to rent it
No
The fascination for crime lurks within almost all of us. We might not indulge in it directly but we often do patronise such indulgence when it is recreated on screen. Some of us go further and become fans and appreciate the crime movie which dwells on detail and intensity. But you would have to go much further to appreciate Black Mass. You'd have to be a geek burrowing deep into the soil of the sub-genre to appreciate Black Mass. And that's bad news for the movie.

South Boston mobster of Irish descent, James "Whitey" Bulger (Johnny Depp) takes the FBI for a ride by pretending to be an informant ratting out on his opponents but meanwhile building his own crime empire in the shadows. Not so much in the shadows actually. He has an accomplice, Agent Connolly (Joel Edgerton), who makes sure that Bulger's own activities don't gather evidence at the FBI in return for the information that he gives him on the other gangs in Boston.

Things go swimmingly for a while. The Italian mafia is reigned in and Connolly lands all the credit. Bulger is minting money with all the drugs, loan-sharking and extortion, and he readily employs murder to ensure smoothness of activity. As he slowly becomes the undisputed crime lord in Boston, it becomes tougher for Connolly to cover him, and soon they're both drowning together. Bulger flees and remains one of FBI's most wanted fugitives for twelve years (second only to Osama Bin Laden).

This sort of a crime story demands its own movie, and like we said, a sub-genre fanatic will place it in their mandatory viewing list and perhaps even revisit it occasionally. However, for the rest of us, Black Mass may not be a very exciting film. We may have appreciated all that Scorcese dished out over the years, but the reason why something like Goodfellas is raved about is for the novelty it brought to crime cinema. Authentically detailed representation of organised crime with a terrific ensemble cast is nowadays enough to be considered a good film, but doesn't necessarily excite as much.

The other kind of film that Black Mass could be positioned as is the biopic of a criminal. But it shies away from a consistent exploration of Jimmy Bulger's psyche. He is portrayed as a gangster with a heart of gold. He may execute the rats in the hood with a calculated coldness but he takes time to hug the old ladies in the neighbourhood and is a loving father to his son with an unmarried girlfriend (Dakota Johnson). But soon, his son and mother pass away (both of natural causes), and he intensifies as the remorseless paranoid murderer. This shift doesn't register as natural.

Johnny Depp does all he can to bring his Bulger to life, even if with dead cold eyes. This is his best performance in a long while, and he gives reason for his fans to celebrate. The softness for his loved ones and the paranoid viciousness of a psychopath go hand in hand, and you'll feel glad he's returned to some emotional acting as opposed to the gimmickry of attire and accent. There is some of that here, too - he sports a disturbing dead tooth, a balding head with silver grey hair, and chilling light blue eyes - but you can overlook that as a requirement to getting into the skin of the character. But really, someone has to talk to Depp and let him know that we appreciate him when he is expressive as much as when he is weird, if not more.

But apart from Depp's performance, Black Mass doesn't give you much insight into the inner workings of Bulger. The approach is to show a string of events without necessarily building an emotional core. Contrast this with Brad Pitt's Jesse James in The Assassination Of Jesse James or Tom Hardy's Forrest Bondurant in Lawless or even Depp's own John Dillinger in Public Enemies. Those films, too, are slow and keenly detailed narratives of the criminal activity and downfall of their protagonists, but you manage to feel invested. Black Mass doesn't pull you in, and you always feel the distance between yourself and the happenings on screen.

And that isn't because of poor technical quality at all. All the performances are on the mark, if not great. The cinematography effectively infuses the coldness of the characters into the visuals. The background score is noticeably good. Evaluated solely on technical parameters, Black Mass would fare really well.

So you have a film which has been put together quite effectively, but with the fundamental core too focused on the representation of a criminal by what he does and in what environment. This might be a good thing for the serious crime genre enthusiasts, but the movie might have gained greater reach and appreciation if it also focused on the internal journey of the same criminal.
Share. Save. Connect.
Tweet
BLACK MASS SNAPSHOT 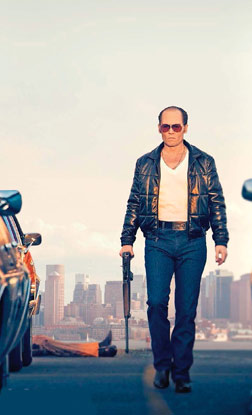 ADVERTISEMENT
This page was tagged for
Black Mass english movie
Black Mass reviews
release date
Johnny Depp, Joel Edgerton
theatres list
Follow @fullhyderabad
Follow fullhyd.com on
About Hyderabad
The Hyderabad Community
Improve fullhyd.com
More
Our Other Local Guides
Our other sites
© Copyright 1999-2009 LRR Technologies (Hyderabad), Pvt Ltd. All rights reserved. fullhyd, fullhyderabad, Welcome To The Neighbourhood are trademarks of LRR Technologies (Hyderabad) Pvt Ltd. The textual, graphic, audio and audiovisual material in this site is protected by copyright law. You may not copy, distribute, or use this material except as necessary for your personal, non-commercial use. Any trademarks are the properties of their respective owners. More on Hyderabad, India. Jobs in Hyderabad.