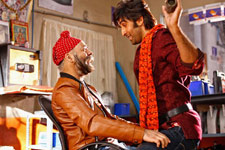 Swayamsrestha Kar / fullhyd.com
EDITOR RATING
7.0
Performances
Script
Music/Soundtrack
Visuals
7.0
6.0
6.0
7.0
Suggestions
Can watch again
Yes
Good for kids
Yes
Good for dates
Yes
Wait for OTT
No
Jim Carrey has an interesting face. Its musculature can be contorted into the most hilarious shapes. It can grace billboards with aplomb, and command more attention than the skimpily-clad body of a supermodel. It can also emote when needed. It has a life of its own.

It doesn't take the mind of a genius to see the Jim Carrey in Ranbir Kapoor. There's the pouting, the crazy eye-rolling, the lecherous lip-chewing, the dental flashing, the nasal warzone, and of course, the eye-brows which jump around more than a baboon conked up on coke. And in Besharam, director Abhinav Kashyap makes ample use of this face.

The real star of the movie is Ranbir Kapoor's face. Followed by his perky derriere, his pelvic thrusts, his MJ-meets-Jeetendra footwork, Neetu Singh and finally, Rishi Kapoor. In that specific order. We realise we are guilty of quite a bit of male objectification there. Call us Besharam.

Goofball Babli (Ranbir Kapoor, and yes, it's an "i" at the end) is quite the accomplished car thief. He does it all for a good reason though. He donates the money to the orphanage where he was brought up.

In between his day-job as mechanic and night-job as a car stealer, he finds time to dress up in garish gold costumes and proclaim his shamelessness to the world through an equally vulgar song-and-dance routine.

There is no stone left unturned to drill it into us that Babli is completely devoid of a single civilised bone in his otherwise supple body. He is crude and uncouth, and is proud to be so.

The movie starts off with a promising car chase. Babli and his side-kick have stolen yet another car, and they are being chased by Inspector Chulbul Chowtala (Rishi Kapoor) and Head Constable Bulbul Chowtala (Neetu Singh).

Mr. Chowtala might not show the same iron will and inflexible ideals as his namesake from Dabangg, but deep inside his cholesterol-laden heart, he is somewhat honest. Mrs. Chowtala, though, has no scruples when it comes to extracting bribes, and building up an egg nest for their retirement. Both share an intense dislike for Babli.

Then, there's Bhim Singh Chandel (Javed Jaffrey), chief of a hawala ring in Chandigarh. He struts around in Jodhpurs, and hires Babli to steal a car for the former's nefarious purposes.

Babli ends up stealing Tara's (Pallavi Sharda) car. He has been trying to woo the lady with his unrefined charms, and this turns out to be a blessing in disguise. He now has an excuse to travel to Chandigarh with her in order to retrieve the car, and then stop by for a quick (but romantic) run through yellow mustard fields a la DDLJ.

We're kidding. He pees onto a field while singing "Tujhe dekha toh..." in a distinctly rustic Haryanvi accent.

They (Babli and Tara) succeed in stealing the car back from Chandel. Only now, there's a huge pile of cash in the trunk, and Chandel's out baying for Babli's blood. And so are the Chowtalas.

Besharam cements the fact that Ranbir Kapoor is a superstar, instead of just being on the way to superstardom (as film magazines and tabloids have been saying for a gazillion years since Bachna Ae Haseeno).

Besharam's brand of humour oscillates between the cringe-worthy and the actually intelligent. In one scene, Babli tells Tara, "Ab tak to sharma rahi thi (her title's Sharma) ab toh besharam ban jao". It's so corny that even the woman who he's trying to court ends up shuddering in disgust.

But then, in another scene, Babli tells a fellow car mechanic "Meri jeep ki denting painting karwake Dilli bhej dena". Somewhere, Abhijit Mukherjee must be ducking his head in shame.

And there's the fundamental flaw in the premise of Besharam. It cannot decide whether it wants to be an Oye Lucky Lucky Oye, or a Dabanng. What it does manage to become is delightfully comic and interesting in parts, and dreadfully dragging in others.

The script employs cliches galore. But in a stroke of genius, some of them end up being subverted. The love story feels tedious, and since when have vigorous dance moves started passing off as chemistry?

What saves this imminent trainwreck though, is Ranbir Kapoor. At the rate at which he's going, he could soon just make faces at the camera, and the audience will lap it up. He is loud, unrestrained (such a departure from Rockstar), and (no other word will suffice) utterly shameless in front of the camera.

Neetu Singh is refreshingly feisty in the role of an elderly policewoman. Rishi Kapoor does the same act as he did in Shuddh Desi Romance. It's getting old. Pun intended.

Pallavi Sharda has serious screen presence, and could do well with fine-tuning her emotive skills.
The music (save the title track) is quite generic and forgettable. The cinematography is nothing new, and the fight scenes all follow the recent logic-defying and physics-defying tend in Bollywood.

Besharam is going to be big. People living under Pluto-sized rocks have heard of the film. But we are quietly celebrating the fact that Bollywood now has its own Jim Carrey.
Share. Save. Connect.
Tweet
BESHARAM SNAPSHOT 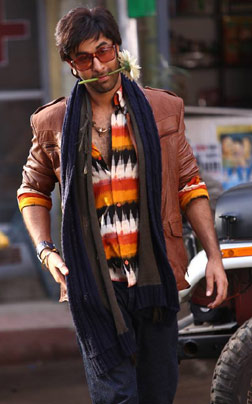 ADVERTISEMENT
This page was tagged for
besharam movie in
Besharam hindi movie
Besharam reviews
release date
Ranbir Kapoor, Pallavi Sharda
Follow @fullhyderabad
Follow fullhyd.com on
About Hyderabad
The Hyderabad Community
Improve fullhyd.com
More
Our Other Local Guides
Our other sites
© Copyright 1999-2009 LRR Technologies (Hyderabad), Pvt Ltd. All rights reserved. fullhyd, fullhyderabad, Welcome To The Neighbourhood are trademarks of LRR Technologies (Hyderabad) Pvt Ltd. The textual, graphic, audio and audiovisual material in this site is protected by copyright law. You may not copy, distribute, or use this material except as necessary for your personal, non-commercial use. Any trademarks are the properties of their respective owners. More on Hyderabad, India. Jobs in Hyderabad.