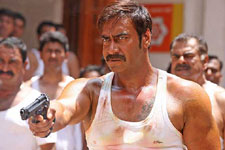 Swayamsrestha Kar / fullhyd.com
EDITOR RATING
6.5
Performances
Script
Music/Soundtrack
Visuals
6.0
4.0
4.0
7.0
Suggestions
Can watch again
No
Good for kids
No
Good for dates
No
Wait to rent it
Yes
Singham Returns is awesome in some very definitive ways:

1. In one frame, BajiRao Singham (Ajay Devgn) orders his sub-ordinate officer, Daya (Dayanand Shetty) - yeah, the same Daya from CID, the dreaded enemy of all locked doors - to lathi-charge a rowdy mob. And Daya proceeds to do just that. With lots of slow-motion panache. And oodles of swagger. With his Ray Bans glinting in the sun. It is epic.

2. There is a very obvious effort to rhetoricise the current political atmosphere in the country. Scattered here and there, between the slow-mo shots of cars blowing up and of goons getting bashed up in even newer ways that Rohit Shetty has come up, are surprisingly insightful comments on the state of the common man in India - the guy who doesn't care which political party is in power because he is desperately looking for ways to feed his family.

3. Did we mention the scenes with Daya already?

Singham Returns, as has been insistently claimed by its makers, is not a remake of the Tamil Singham 2. It is its own story. So, given it's yet another Rohit Shetty sequel, even Suppandi would know that the trick is to not have high expectations.

The story - set in Mumbai this time - goeth thus. The fateful cesspool of corruption and dirty politics which we fondly refer to as democracy has a new angry young man patrolling the streets now - Bajirao Singham.

He and his gang of hulking police buddies are determined to clean out the city's streets of all the wayward scum that keeps busy the machinery of law and order - from a gang of reckless college students on bikes to thugs parading around as saints, like Baba Whatevs (amidst all that thumping music going "Singham!" in almost all the key scenes, we couldn't quite catch the name of Amol Gupte's character).

Baba is in cahoots with Prakash Rao (Zakir Hussain), another "respected politician" who apparently doesn't deserve any of that respect. Both indulge in hoarding black money through fraudulent schemes and through fooling people who are already stupid enough to believe in the healing power of self-proclaimed saints.

On the other hand, Guruji (Anupam Kher), chief of the Bharatiya Lok Dal, and wannabe Father-of-the-Nation, is determined to install young people at the helm of political affairs in the country, and objects most strictly to shady dealings of any kind. This gives him a life-expectancy of around less than half the running time of the movie.

Then, there is Avni (Kareena Kapoor Khan) who falls for the hero because their families have been neighbours their whole lives, and because Singham is such a charmer - though not in that order necessarily. Or maybe in that order - who cares about the reasons as long as there is an item song at the end with Yo Yo Honey Singh, singer-songwriter extraordinaire, where both Devgn and Kareena proceed to, in crass language (or as we like to call it, Honey Singh-speak), shake what their mamas gave them.

Singham has to battle it out with the bad guys, save his own spotless reputation and that of one of his own men who seems to have been involved with the baddies, and sing songs with Avni, all in the course of one movie. Isn't that reason enough to declare him a certified Badass?

Dudley's cinematography is excellent, as it was in the first movie. But Singham Returns suffers from some really shoddy editing.

The movie does try to raise some pertinent points about the nature of policing in this country. Singham believes that cops are the citizen's friends, and therefore, must be able to sympathise and empathise with the people that they are sworn to protect. The protagonist here is then heroic in every sense of the word - admired by the aam junta, revered by his colleagues and feared by enemies. The proverbial fall, therefore, must be equally immense in its magnitude, and thankfully, the narrative doesn't thwart this rule of inevitability.

Yet, the movie could have been way more hard-hitting, had it not been glossed up in hundred shades of Bollywood-esque romanticization. In fact, two key action scenes in the movie - both involving shootouts - are quite realistically done, and remind you of Shootout At Lokhandwala. If Shetty had stopped short of kitschy sentimentalism and cheap commercialisation, this movie could actually have made a difference.

Ajay Devgn stares smoulderingly at the camera and fits into the shoes of Singham beautifully. He is this reviewer's second favourite angry young man (Big B will forever be the first). Kareena is chirpy, fiesty, and a treat to watch. She flaunts elegant long skirts and french braids, and looks absolutely delectable.

Anupam Kher is sombre and dignified as Guruji, and Amol Gupte is appropriately menacing - and sometimes, needlessly OTT - as Baba (also, his act seems to be getting more and more repetitive).

Singham Returns is an appropriate movie to watch on Independance Day. Because democracy is not a bed of roses after all, and sometimes, we need reminding.
Share. Save. Connect.
Tweet
SINGHAM RETURNS SNAPSHOT

ADVERTISEMENT
This page was tagged for
Singham Returns hindi movie
Singham Returns reviews
release date
Ajay Devgn, Kareena Kapoor
theatres list
Follow @fullhyderabad
Follow fullhyd.com on
About Hyderabad
The Hyderabad Community
Improve fullhyd.com
More
Our Other Local Guides
Our other sites
© Copyright 1999-2009 LRR Technologies (Hyderabad), Pvt Ltd. All rights reserved. fullhyd, fullhyderabad, Welcome To The Neighbourhood are trademarks of LRR Technologies (Hyderabad) Pvt Ltd. The textual, graphic, audio and audiovisual material in this site is protected by copyright law. You may not copy, distribute, or use this material except as necessary for your personal, non-commercial use. Any trademarks are the properties of their respective owners. More on Hyderabad, India. Jobs in Hyderabad.