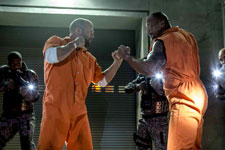 Indranil Majumdar / fullhyd.com
EDITOR RATING
7.5
Performances
Script
Music/Soundtrack
Visuals
8.0
7.0
8.0
8.5
Suggestions
Can watch again
Yes
Good for kids
No
Good for dates
No
Wait to rent it
No
When the creators of the Fast And Furious franchise had conceived the idea for the first film, they would certainly not have dreamt of there being seven more installments after. Most of the reason for this is the surprisingly wide appeal of what would originally appear to be a genre that would interest only a niche audience. You would think that the only audiences the franchise would be able to garner are people who just love cars and racing, but the creators have mastered the art of incorporating the dramatic into all of that, hugely broad-basing their market.

Indeed, the tried and tested formula of family ethics and values has worked across all the installments, and it works in this one as well. Added to the capability to keep it all simple, it results in the franchise having even more steam after eight installments now.

Dominic Torreto (Vin Diesel) is out honeymooning with beloved Letty Ortiz (Michelle Rodriguez) in Cuba, and it's all going great between them. However, Dom goes rogue after almost being brain-hijacked by the queen among cyberterrorists Cipher (Charlize Theron). He turns against his family and starts working for the criminal mastermind. Her plans are outrageous and best left unsaid, and she hires Dominic since although she has it all sorted out behind the computer, she still needs a lumberjack for the feet-on-street component of her business plan.

The Co. in Dominic and Co. are outraged and shellshocked by this transformation in Dominic's character. Obviously, however, there's some method to the seeming madness, and it all makes for a fine film.

Every single member of the cast is in fine form. Dwayne "The Rock" Johnson (as Luke Hobbs) does what he does best - flex his muscles. Diesel, Theron and Rodriguez are terrific, although this film gives them a lot less screentime than they deserve. Tyrese Gibson (as Roman Pearce) and Ludacris (as Tej Parker) comprise the funny bone of this film, and are so, so good. Their pair is a thing of beauty.

However, each and every one of them is absolutely overshadowed by Jason Statham (as Deckard Shaw). If Diesel is the fuel of this vehicle, Statham is the driver, and boy, does he drive exceptionally well. The guy has perhaps 20 minutes of screentime, but he is the very heart of the movie. Everything about Statham is textbook masterclass: a stunning entry (one that will remind you of the Crank films that Statham himself stars in), an absolutely crackerjack accent, and an unparalleled command over action sequences.

Statham owns every frame he is a part of, and it's splendid to see him smile considering he has been typecast as absolutely stoic in almost all of his films. He gives this movie direction, zing and its best moment. The scene on a flight towards the end of the film is a certified winner, and had it not been for Statham's re-inclusion, this one would not have been half the film it is.

There's also a cameo by an absolutely ravishing British actress, and her scene with Statham is right out of the top draw. Scott Eastwood (as Eric Reisner) and Nathalie Emmanuel (as Ramsey) are exceptional in their respective roles.

The locales are exquisite. The action sequences are phenomenally well-done, and keep you on the edge of your seat at all times. There's a car scene that has to, at some point, remind you of Mad Max: Fury Road. The resemblance is uncanny, but no one's complaining.

The film however could have done with some pauses, a few breathing spaces. There is just too much happening on the screen in every second throughout the film, and sometimes it is a little harsh on the eye. There is a scene that looks like it was made for an apocalypse film (a car apocalypse at any rate), and it is absolutely unrequired.

The soundtrack by Brian Tyler is superb, and complements the menacing of the film to the hilt. Director Felix Gary Gray (of Straight Outta Compton) does a great job of distilling star power into fine acting, and his flair for precision is evident when you see just how well each comic scene is placed within the film's runtime.

Fast and Furious 8 works on most counts, and the hint of another film at the end is the icing on the cake. This one might feel like old wine in a new bottle to many, but that's just what the fans want.
Share. Save. Connect.
Tweet
FAST AND FURIOUS 8... SNAPSHOT
FAST AND FURIOUS 8 (HINDI) SNAPSHOT 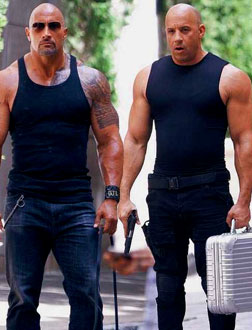 ADVERTISEMENT
This page was tagged for
rdxhd fast and furious 8 in hindi
fast and furious 8 hindi watch online
rdxhd fast and furious 8full movie online watch
fast and furious 8in hindi
fast and furious 8 full movies
Follow @fullhyderabad
Follow fullhyd.com on
About Hyderabad
The Hyderabad Community
Improve fullhyd.com
More
Our Other Local Guides
Our other sites
© Copyright 1999-2009 LRR Technologies (Hyderabad), Pvt Ltd. All rights reserved. fullhyd, fullhyderabad, Welcome To The Neighbourhood are trademarks of LRR Technologies (Hyderabad) Pvt Ltd. The textual, graphic, audio and audiovisual material in this site is protected by copyright law. You may not copy, distribute, or use this material except as necessary for your personal, non-commercial use. Any trademarks are the properties of their respective owners. More on Hyderabad, India. Jobs in Hyderabad.