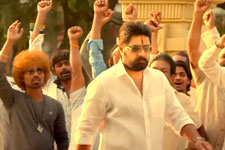 Sonali Dabade / fullhyd.com
EDITOR RATING
4.0
Performances
Script
Music/Soundtrack
Visuals
3.5
2.5
2.0
3.0
Suggestions
Can watch again
No
Good for kids
No
Good for dates
No
Wait to rent it
NA
Operation 2019 is a movie in the same mould as Operation Duryodhana that released in 2007. While Operation Duryodhana talked about an honest police officer getting fed up of politics and joining it to bring it down from within, Operation 2019 is about an NRI who wants to do good for the people of his native village. The recipe is the same - it's the garnishing that's different.

Uma Shankar (Srikanth), a rich NRI, upon seeing the plight of the farmers from his village fighting for loan waivers, sends Rs. 1 crore to the local MLA to distribute among the farmers. But that money is guzzled by the party, which distributes it during election time to buy votes.

When Uma Shankar finds out about this, he lands in India, and in the by-elections that ensue when the the incumbent MLA dies, backs a well-known and well-intentioned candidate, Narayana Murthy, to compete against the deceased MLA's brother, Venkatachalam, a violent, psychotic man. Venkatachalam however wins using his political guile.

Incensed at the loss, Uma Shankar confronts Venkatachalam, but is provoked by the cunning politician and ends up in jail for a year for slapping Venkatachalam. Once he gets out, Uma Shankar takes on some of the biggest politicians in the land by joining their own profession and using the same tactics they use. However, upon succeeding, he too becomes callous towards the people, and treats them just like all the other politicians do. But is there more to his attitude than meets the eye? The answer comes at the unsatisfactory end of an excruciatingly long movie.

Operation 2019 tries to show what's wrong with today's politics and politicians, and holds the people culpable. That may be a promising theme, but there are too many things wrong with the execution. The movie is a disaster from the get go, thanks to all the holes in the plot. There is no reasoning behind the actions of most of the characters, and the script relies mostly on showing news stories to further its development. Indeed, for a long time the only thing that you watch on screen are cars arriving, people getting off them, people meeting other people, and news stories revealing what happened in those meetings. The movie stagnates to the point where there is nothing happening in it except for adrenalin-filled declarations of heartbreak and doing the right thing for the country. If you are looking to put out a political thriller, the least you need is a fast-paced, crisp screenplay. The only thing that helps the film a little is the fact that it is a wannabe satire that needs to be taken with a pinch of salt.

Also, multiple unnecessary tracks have been written into the movie. For example, Uma Shankar's secretary trying to seduce him is such a nuisance that it makes you cringe. And Sunil makes a cameo in a song that isn't required at all.

If Operation 2019 had been directed better, there might have been so many amazing performances. Knowing Srikanth's acting calibre, he could have had a cracking comeback of sorts. But all you get is over two hours of a grimacing Srikanth trying and only marginally succeeding in being intense. Posani Murali Krishna's little cameo shows how many overacting bones he has in his body. And the parody of Chandrababu Naidu is cringeworthy at the minimum. Most other characters are in there merely for numbers, and don't try at all to add anything to the movie.

The music and the background score are simply bad - there's no other way of putting it. They sound forcefully patriotic and macho. And the cinematography isn't something that will make you like the movie, even if you dissociate it from the other aspects of it. We think that the makers missed the memo that using slo-mo for every frame that the protagonist is in does not elevate him to legendary status. 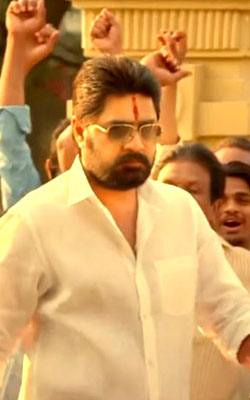 ADVERTISEMENT
This page was tagged for
operation 2019 telugu movie
Operation 2019 telugu movie
Operation 2019 reviews
release date
Srikanth, Diksha Panth
Follow @fullhyderabad
Follow fullhyd.com on
About Hyderabad
The Hyderabad Community
Improve fullhyd.com
More
Our Other Local Guides
Our other sites
© Copyright 1999-2009 LRR Technologies (Hyderabad), Pvt Ltd. All rights reserved. fullhyd, fullhyderabad, Welcome To The Neighbourhood are trademarks of LRR Technologies (Hyderabad) Pvt Ltd. The textual, graphic, audio and audiovisual material in this site is protected by copyright law. You may not copy, distribute, or use this material except as necessary for your personal, non-commercial use. Any trademarks are the properties of their respective owners. More on Hyderabad, India. Jobs in Hyderabad.