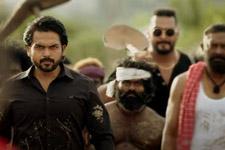 Anil Bandhakavi / fullhyd.com
EDITOR RATING
7.0
Performances
Script
Music/Soundtrack
Visuals
7.0
7.0
6.0
8.0
Suggestions
Can watch again
Yes
Good for kids
Yes
Good for dates
Yes
Wait to rent it
Yes
A hard-hitting story about loyalty and honour can really get us riled up as it latches on to our deep-set desire to truly witness the heroic nature in our being. Alas, for most of us, the only chance to display our heroism possibly comes in the form of a sudden reflex that leads to us catching a falling bag of biryani that accidentally slips off the edge of a table during our lunch break from our sedentary desk jobs after which we proudly serve seconds to our hungry co-workers. Instead, Bakkiyaraj Kannan does a way better job of delivering a vicarious experience of the hero's way to you in his film, Sulthan.

Vikram (Karthi) is given the name Sulthan by his uncle, Mansoor (Lal), who is told that the child will always remain loyal to his people. His father, Sethupathi (Napoleon), is one of the most notorious mobsters in the trade of killing for money. With the passing of his mother at the time of his birth, Sulthan is brought up by Sathupathi, Mansoor, and over ninety of the most barbaric hitmen, who work for his father, who he considers to be his own big brothers. In this household of killers, the child is pampered affectionately and kept sheltered from his father's line of work.

When Sulthan grows up, he learns that the new Police Commissioner (Hareesh Peradi) in town is intent on eliminating his father's gang. An attempt carried out by the police injures a number of gangsters who take bullets when they shield Sulthan and his father. Sulthan is upset to know that he was always kept safe at the possible expense of his brothers. Meanwhile, Sethupathi's dying wish is that Sulthan always be there to take care of his brothers.

Sulthan's new mission is to drag his brothers out of the killing business. He implores the Police Commissioner to give him six months to set them straight. His mission is now in direct contradiction with his brothers' aim to fulfil Sathupathi's final vow to one of the farmers (Ponvannan) of a secluded village to kill Jayendra (Ramachandra Raju), a man who wreaks havoc on the farmers and prevents them from freely sowing their seeds, which leaves the farmers starving as their own land remains unused.

Sulthan is stuck at a crossroads as he sympathises with the farmers' plight but also wants to prevent his brothers from engaging in another killing. Rather than succumb, he doubles down on the situation by pushing his brothers into farming in order to help the farmers rekindle their produce, while he defends the village against Jayendra's wrath. The challenge now is to maintain the delicate balance between these two tasks. All this while he attempts to court Rukmini, the girl from the village who has him head over heels.

Sulthan is a complete movie that delivers all the flavours in one package. At two-and-a-half hours in length, the film manages to keep you hooked on to a very unique plot that mixes in action, comedy, love, fraternal loyalty, honour, mutiny etc. For a story that entirely plays out in the realm of fantasy, it manages to maintain a sense of relatability by somehow not exaggerating the exaggerated.

Although the story takes you down a windy road with so many conditions and constraints getting added in as you go, it all unravels neatly at the end. The many fight scenes are all uniquely choreographed and do not feel like a burden on your time. The build up to various moments in the film captures elements that get you warmed up for what's coming, accompanied by cinematography that covers the most appealing perspectives and followed up by sharp editing to bring out colours that enhance the vibe in each instance.

The performances prevent your mind from trailing back to reality and span a wide range of personalities. Karthi's character is the embodiment of loyalty and honour, so we accept that his strength is unmatched even though he is the littlest guy on screen. His almost seven-foot-tall bodyguard, whose presence is continuous and cartoonish if you will, is a caricature of a human who displays the emotions of a child for his master.

Sulthan's brothers capture the various persuasions of the gangster nature - some goofy and others serious, some quiet and others noisy, and many of them decked in heavy jewellery - and collectively come as a group that you'd readily like to avail if you were into mobbing. Indeed, These are the coolest looking rowdies you'll ever see. The villagers juxtapose this unruly bunch in a display that is more grounded in raw humanity. Rashmika Mandanna owns her time on screen as a sweet but shrewd match for Karthi.

High energy sound-work by Yuvan Shankar Raja and Vivek Mervin bolster the ballistic visual display and keep your eyes and ears away from your phone.

Sulthan is a smorgasbord of flavours that hits hard on both the artistic and technical levels. This film is a no-brainer if you're stuck making a choice at the box office.
Share. Save. Connect.
Tweet
SULTHAN (TELUGU) SNAPSHOT 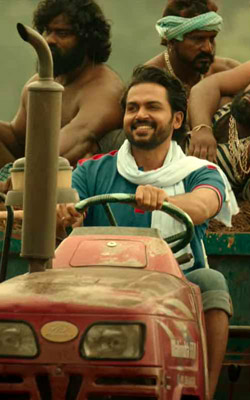 ADVERTISEMENT
This page was tagged for
Sulthan (Telugu) telugu movie
Sulthan (Telugu) reviews
release date
Karthi, Rashmika Mandanna
theatres list
Follow @fullhyderabad
Follow fullhyd.com on
About Hyderabad
The Hyderabad Community
Improve fullhyd.com
More
Our Other Local Guides
Our other sites
© Copyright 1999-2009 LRR Technologies (Hyderabad), Pvt Ltd. All rights reserved. fullhyd, fullhyderabad, Welcome To The Neighbourhood are trademarks of LRR Technologies (Hyderabad) Pvt Ltd. The textual, graphic, audio and audiovisual material in this site is protected by copyright law. You may not copy, distribute, or use this material except as necessary for your personal, non-commercial use. Any trademarks are the properties of their respective owners. More on Hyderabad, India. Jobs in Hyderabad.