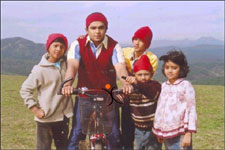 EDITOR RATING
3.0
Performances
Script
Music/Soundtrack
Visuals
NA
NA
NA
NA
Suggestions
Can watch again
NA
Good for kids
NA
Good for dates
NA
Wait for OTT
NA
Pandu (Sachin) is a mentally challenged youngster in Ooty who's still in school due to an unfortunate accident he's had as a kid - he's unintelligible, slow, fatuous and a bloody pain to his mother. In many ways, similar to what you'll be after you come out of this film.

One day Priya (Sandali Sinha) comes into the neighbourhood with her fiancé, and Pandu keeps running into her in all the moments when he shouldn't be around, like when she's swimming, when she's bathing, when she is playing, and when the movie is on.

Priya's fiancé Vicky (Rajiv Kanakala) is a complete crook when seen in the right perspective, and keeps trying to hurt Pandu for all this. Unfortunately for Vicky, Pandu does not realize that he is being hurt. Completely frustrated, Vicky decides to commit suicide. Okay, we were just kidding - everybody knows that no intelligent moviemaker makes any of his main characters decide to commit suicide just like that.

Anyway, Pandu decides to commit suicide. Now Pandu once gives something to eat to a Baba living atop a hill, and it's now payback time. The Baba stops Pandu, gives him a special fruit and blesses him. And yes, a miracle happens!

This is where we test our readers' IQ - select the correct miracle from the following options:To all those who selected (e), your profile matches that of the target audience that this film was made for. We hope you will find your own Baba.

Anyway, Pandu is now super-skilled (he still can't act of course - hey, the fruit can only perform miracles). He starts by entering some sports competitions where he completely defeats the expected winner Vicky and wins Priya's heart. But her dad will have none of it, and sets a band of goons on Pandu's case, but Baba blesses him yet again, and he beats them to pulp and productively wins Priya's hand in marriage.

Let's first look at all the nice things about Orey Pandu. Okay, now let us look at all the failings. The first is the performances. To portray a mentally challenged person, you need someone of exceptional acting mettle - not a rookie who can't do even the normal part well. This film looks like a remake of Koi Mil Gaya, and there Hrithik Roshan gave an award-winning performance. Sachin should've at least rehearsed like the dickens.

Babas and men of God who have such powers would not give them to spill the guts of bad guys - they would aim to heal, to convert the bad people. Bhanu Priya as Pandu's mother puts in an expectedly fine performance, and Brahmanandam and Babu Mohan do a routine comic interlude, but a scene in a telephone booth involving Venu Madhav and Brahmanandam is pretty good though it gets overdone. Sandali Sinha is just a glamdoll, and does fine. The music is sub-par.

In sum, this is hardly a kind of movie you'd expect of S V Krishna Reddy.
Share. Save. Connect.
Tweet
OREY PANDU SNAPSHOT

Thank you very much for the kind words. While the reviewer thinks he/she is important enough to wish to maintain a secret identity :), all our reviewers read the postings made by our users, and he/she is very grateful for the words, indeed.

ADVERTISEMENT
This page was tagged for
Pandutelugumovie review
orei pandu movie
Orey Pandu telugu movie
Orey Pandu reviews
release date
Follow @fullhyderabad
Follow fullhyd.com on
About Hyderabad
The Hyderabad Community
Improve fullhyd.com
More
Our Other Local Guides
Our other sites
© Copyright 1999-2009 LRR Technologies (Hyderabad), Pvt Ltd. All rights reserved. fullhyd, fullhyderabad, Welcome To The Neighbourhood are trademarks of LRR Technologies (Hyderabad) Pvt Ltd. The textual, graphic, audio and audiovisual material in this site is protected by copyright law. You may not copy, distribute, or use this material except as necessary for your personal, non-commercial use. Any trademarks are the properties of their respective owners. More on Hyderabad, India. Jobs in Hyderabad.