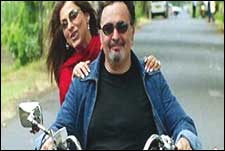 Prasheel Anand / fullhyd.com
EDITOR RATING
5.0
Performances
Script
Music/Soundtrack
Visuals
NA
NA
NA
NA
Suggestions
Can watch again
NA
Good for kids
NA
Good for dates
NA
Wait to rent it
NA
Pyaar Mein Twist corresponds with the promos that have been filling TV sets for a month now - showing Rishi Kapoor and Dimple Kapadia elope. Yeah, they do break norms, but the 'great escape' isn't as circumstantial as the one in Bobby was. If you're expecting this film to transpose you into the realm of the original puerile tryst of Bobby, you will have to wear age-defying eyewear, and watch Bobby again just before entering the hall. Otherwise, there's only one thing that can make you watch this - again, it's Rishi and Dimple eloping. They still complement each other impeccably onscreen.

Yash Khurana (Rishi Kapoor) is an accomplished businessman whose wife's has left him. 20 years later, the time has come for him to descend from the throne and pass the mantle to his son. The son obliges, and it's time for Yash to amuse his pet dogs and gulp gallons of scotch. So, as things should take shape for the "great escape", he's now "single" and ready.

Enter Sheetal Arya (Dimple Kapadia), a well-to-do businesswoman, loving mother of two, and widow of someone. She's about to get her younger progeny, her daughter (Sohaa Ali Khan), married to an supposedly all-knowing yet sluggish Mr. Right (Sameer) from the US. The young couple is engaged, and so are the two families, but now comes the twist.

Bah! Developing half of the plot for this puny twist, that too when you know what's coming, is sheer garbage. However, the twist, as I already said, and as you already know from the promos, is the couple eloping. I mean, Rishi and Dimple.

Okay, Yash and Sheetal are now dating - dining and wining at a plush restaurant - after a couple of dissonant encounters on the roads and at shopping malls. If Rishi Kapoor's father Pran was against their love in Bobby, this time it's the kids of the athletic couple that are spoiling the party.

The kids cannot gulp the fling between these two enraptured, senile beings, and out comes the disgust in the form of insinuations against their flimsy attitude. After an hour and a half, the moment arrives. The protagonists bid goodbye to their ungrateful families, and soar out. The kids later realize their impulsiveness, and after being generously guided by Buajee (Farida Jalaal) about how the parents deserve their space and companionship, they begin tracking down the adventurous couple.

Eventually, all the frustrations, misgivings and malignity between the pyaar mein paagal duo and their offsprings ends, though rather simplistically. Hriday Shetty, the director, has projected the concept too superficially. Good for him, for any more complications in the story, like including bad guys or religious fanatics for instance, would have drawn more grey hair from Rishi's scalp.

The acting is smooth, owing to the director's selection of seasoned professionals. Rishi Kapoor, however, steals the show, apart from Dimple's ever-flowing, illustrious hair. The music by Jatin-Lalit blends with the mood of the film, and the pace at which the couple elopes. The number Pal Tham Gaya Hain stands out.

Pyaar Mein Twist is not a must-watch even if you're a Dimple-Rishi fan. Watching a disc of Sagar or Bobby would be a much more de-stressing affair.
Share. Save. Connect.
Tweet
PYAAR MEIN TWIST SNAPSHOT

ADVERTISEMENT
This page was tagged for
Pyaar Mein Twist hindi movie
Pyaar Mein Twist reviews
release date
Rishi Kapoor, Dimple Kapadia
theatres list
Follow @fullhyderabad
Follow fullhyd.com on
About Hyderabad
The Hyderabad Community
Improve fullhyd.com
More
Our Other Local Guides
Our other sites
© Copyright 1999-2009 LRR Technologies (Hyderabad), Pvt Ltd. All rights reserved. fullhyd, fullhyderabad, Welcome To The Neighbourhood are trademarks of LRR Technologies (Hyderabad) Pvt Ltd. The textual, graphic, audio and audiovisual material in this site is protected by copyright law. You may not copy, distribute, or use this material except as necessary for your personal, non-commercial use. Any trademarks are the properties of their respective owners. More on Hyderabad, India. Jobs in Hyderabad.