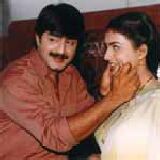 SS / fullhyd.com
EDITOR RATING
3.0
Performances
Script
Music/Soundtrack
Visuals
NA
NA
NA
NA
Suggestions
Can watch again
NA
Good for kids
NA
Good for dates
NA
Wait to rent it
NA
MCP husbands and rebellious wives... heard before. Next? The fairer sex attempting at a reversal of roles... nothing new. Wives trying to build their own careers much to the dismay and envy of their husbands... not novel either. So, what's new?

Right from Police Bharya and Pellam Chepthe Vinali to Mr Pellam, most movies targeted at women audiences churn out the same theme with a twist here and a turn there. When would Telugu audiences be relieved of such trash that comes wrapped in an attractive package called 'comedies'?

Supposed to be a middle-class family drama involving three families, MCP husbands and rebellious wives, Kshemamga Velli Laabhamga Randi — the recent release in this category — is monotonously repetitive at every step. Not only in terms of the theme, but also in terms of content and dialogues.

What happens in one family between Ravi (Srikant) and Geeta (Roja) also happens between Rambabu (Rajendra Prasad) and Janaki (Preeti), and is again repeated between Sambhulingam (Brahmanandam) and Subbalakshmi (Kovai Sarala). So, when the three jobless mechanic husbands try to prevent their wives from taking up employment, the sick fare is trebled scene by scene and almost word for word.

Rajendra Prasad's re-entry in a comedy role after a long gap is so disappointing that the epitaphs written for him may as well be forgotten now. Srikant looks like the villain he was in his early films and Brahmanandam is, to say the least, boring.

However, Ramya Krishna as Bala Tripura Sundari alias Baby is very interesting in a character that she has never donned before. Both Roja and Preeti (Ravi Raja's Rukmini) as responsible housewives have limited scope. However, Kovai Sarala, who is not seen widely on the Telugu screen, manages to bring in some hilarity.

Those who don't know the difference between stage play and movie eventually end up making tele-serials for local channels. Raja Vannemreddy joins this growing tribe of directors with his debut film, which has a very deceptive title that gives no hint of its contents.

The less said about the music the better. Vandemataram Srinivas' dud tunes have been picturized in a tasteless manner, save the song featuring Alphonsa.

Prakash Raj has a smaller role as Baby's teacher husband. Even if you are gripped by a strong urge to leave the hall when this villain-turned-hero delivers a lecture on the dignity of women after the erring husbands repent their actions, you can do nothing to save your life. It is too late. That is the climax.
Share. Save. Connect.
Tweet
KSHEMANGAA VELLI LAABHANGAA RANDI SNAPSHOT

ADVERTISEMENT
This page was tagged for
Kshemangaa Velli Laabhangaa Randi telugu movie
Kshemangaa Velli Laabhangaa Randi reviews
release date
Srikanth, Rajendra Prasad
theatres list
Follow @fullhyderabad
Follow fullhyd.com on
About Hyderabad
The Hyderabad Community
Improve fullhyd.com
More
Our Other Local Guides
Our other sites
© Copyright 1999-2009 LRR Technologies (Hyderabad), Pvt Ltd. All rights reserved. fullhyd, fullhyderabad, Welcome To The Neighbourhood are trademarks of LRR Technologies (Hyderabad) Pvt Ltd. The textual, graphic, audio and audiovisual material in this site is protected by copyright law. You may not copy, distribute, or use this material except as necessary for your personal, non-commercial use. Any trademarks are the properties of their respective owners. More on Hyderabad, India. Jobs in Hyderabad.