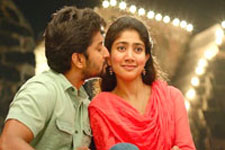 Ravi Kandala / fullhyd.com
EDITOR RATING
4.0
Performances
Script
Music/Soundtrack
Visuals
6.0
3.0
4.0
6.0
Suggestions
Can watch again
No
Good for kids
No
Good for dates
No
Wait to rent it
No
Masala movies are not bad, and following the template is not bad at all, but even those need to be made with care. When the twist is revealed, the audience needs to go "Woah, didn't see that coming", and not "I told you so". When a song comes up, the audience needs to sit back and hum along, not ho-hum and use it for toilet breaks. When an emotional moment comes up, the audience should be wringing their handkerchiefs, not their hands, in impatience. You get the idea.

There were a couple of important revelations for this writer while watching MCA. First, there were only three names from the cast that were mentioned at the beginning of the film - Bhoomika Chawla, Sai Pallavi and Vijay Varma (Toli Parichayam). Nani's name would of course come later, but when you have seen Rajiv Kanakala, Naresh and Amani in the movie, it is surprising that they would mention only those names in the titles. The second revelation was when Sai Pallavi came on screen. The kind of cheers and hoots we heard for her were next level - the reception Nani received was lukewarm at best.

Apart from these two, though, MCA proceeded on extremely predictable notes. The plot: Nani (Nani) is a young man who is forced to accompany his sister-in-law Jyoti (Bhoomika) to Warangal. He does not like her but the love for his brother (Rajeev Kanakala) forces him to move. There, he falls in love with Pallavi (Sai Pallavi) and proceeds with the two mandatory duets. By the interval, Jyoti, who is an RTO, rubs Shiva (Vijay Varma) the wrong way by seizing two of his buses. Shiva vows to kill Jyoti and Nani swears to protect her. And the second half is all about the cat and mouse game between the two.

Now back to the predictability aspect of it. There is a line we often read in reviews: "the screenplay is brilliant and the director ties up all loose ends by the climax". Venu Sriram does exactly that - every scene in the movie is tied up to something that happens later. Only, the moment we see the scene, we know where it is going to be used later. Nani is introduced as someone with a photographic memory, and you know that the director will use this in the climax. You are given a throwaway shot of a prepaid mobile recharge card flying away and Nani reciting the recharge code to the heroine, and you know that the heroine will give him an inspirational speech sometime later. There are many scenes like this, and if you can't see these twists coming, you deserve this movie.

The director also conveniently forgets some of the traits he imparts to his characters. The villain is shown as someone who only travels in mini-buses owing to his stint in a juvenile home. In the later scenes, though, he is conveniently shown to be traveling in cars - character development be damned. A cell phone hidden away to record what's happening conveniently stays charged for days on end. A burnt bike is rebuilt to look exactly like it was in exactly two days. The list goes on and on - the conveniences are way too many to be ignored.

Nani does a reliable job as usual, but our directors really need to give him better roles. This safe zone got boring a couple movies back, and is likely to start failing sooner rather than later. Sai Pallavi is reliable and it is really refreshing to see a heroine emote and wear relatable clothes for a change. Bhoomika gets a decent role, but Naresh and Amani are so criminally underused, the director could be prosecuted solely on that charge. Vijay Varma, who plays the villain, is given top billing, but his role remains a sideline.

Devi Sri Prasad is completely out of form - run of the mill does not even begin to describe the music. Warangal is captured beautifully, so much so that you keep wondering why they flew to those foreign locations for a couple of songs - neither Nani nor Sai Pallavi nor the songs they are dancing to seem remotely at home in those locations.

MCA could have been a safe holiday film for all those involved, but an unimaginative second half leaves it hanging. Nani has had enough success and can surely move away from the predictable zone and try something new - this writer, for one, would be happy to watch him push the boundaries just that much.
Share. Save. Connect.
Tweet
MCA (MIDDLE CLASS ABBAYI) SNAPSHOT 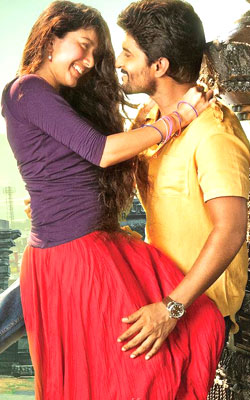 ADVERTISEMENT
This page was tagged for
mca heroine dress
MCA (Middle Class Abbayi) telugu movie
MCA (Middle Class Abbayi) reviews
release date
Nani, Sai Pallavi
Follow @fullhyderabad
Follow fullhyd.com on
About Hyderabad
The Hyderabad Community
Improve fullhyd.com
More
Our Other Local Guides
Our other sites
© Copyright 1999-2009 LRR Technologies (Hyderabad), Pvt Ltd. All rights reserved. fullhyd, fullhyderabad, Welcome To The Neighbourhood are trademarks of LRR Technologies (Hyderabad) Pvt Ltd. The textual, graphic, audio and audiovisual material in this site is protected by copyright law. You may not copy, distribute, or use this material except as necessary for your personal, non-commercial use. Any trademarks are the properties of their respective owners. More on Hyderabad, India. Jobs in Hyderabad.