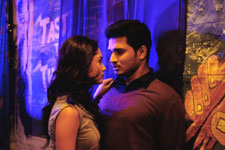 Ravi Kandala / fullhyd.com
EDITOR RATING
5.0
Performances
Script
Music/Soundtrack
Visuals
6.0
5.0
5.0
7.0
Suggestions
Can watch again
No
Good for kids
No
Good for dates
No
Wait to rent it
No
We'd mentioned previously that it is always good when our heroes have a few flops. This forces at least some of them (discounting the Ghajinis who churn out the same movies over and over again) to experiment. Nikhil falls into the category of such leading actors who thought they were the next best thing to happen to the Telugu film industry, faced a barrage of flops, and then sat back and took a long, hard look at their careers. He then made Swamy Ra Ra which worked well as it was fresh, and then he made Karthikeya which was good, too.

When the trailers of Surya Vs Surya came out the expectations went up several notches. The concept sounded good - a guy named Surya who will die if he ever faces the sun, and his love story. It sounded experimental and fun. But all experiments do not succeed. Which is not exactly we are saying about Surya Vs Surya.

Anyway, so Surya (Nikhil) is a guy who has a rare genetic disorder due to which he cannot go out in the sun - if he does, he will die in no time. Surya then grows up in his heavily tinted house, and is allowed out of his house only post 6:30pm. He joins a night college and befriends Arunasri (Sathya) and Yerrasaami (Tanikella Bharani), the latter an auto driver and a kirana shop owner by profession.

He also diligently follows a late night TV show hosted by Sanjana (Tridha), and is in love with her. He spots her one night and makes his interest evident. The inevitable happens and the duo fall in love. Surya, afraid of losing her, hides his condition from her. This leads to complications that are resolved for the final Happy Ending.

Surya Vs Surya does well until the interval. The film coasts along a light, fun path without too much melodrama. There are a couple of situational songs that make for good viewing. And then the second half syndrome strikes - the movie descends into melodrama. The director, who shows a perfectly good grip on all things light and romantic, loses it inexplicably. He also decides to give you a lesson in making a boat from a stripped-down auto and a few hundred plastic bottles - this plot point is actually stretched over 15 minutes! The film gets back on track only in the last 15-20 minutes.

Coming to the performances, Nikhil continues to improve. He portrays quite a few emotions convincingly enough, and it is a delight to see him grow as an actor. Tridha Choudhury is a good find, and complements the hero well for a while before descending into deer-caught-in-headlights expressions in the emotional parts.

The music is situational, which means it will sound good on screen and will never be on loop on your iPod. The film is visually brilliant but the sound mixing is terrible - a good chunk of the dialogues are inaudible.

Surya Vs Surya is better than all the tripe dished out last week, which is not saying much. But if you don't mind a slightly stretched second half, it is not a bad one-time watch.
Share. Save. Connect.
Tweet
SURYA VS SURYA SNAPSHOT 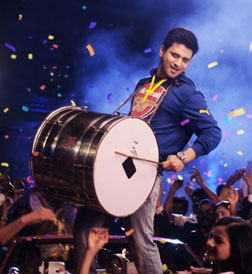 ADVERTISEMENT
This page was tagged for
Surya Vs Surya telugu movie
Surya Vs Surya reviews
release date
Nikhil, Tridha Choudhury
theatres list
Follow @fullhyderabad
Follow fullhyd.com on
About Hyderabad
The Hyderabad Community
Improve fullhyd.com
More
Our Other Local Guides
Our other sites
© Copyright 1999-2009 LRR Technologies (Hyderabad), Pvt Ltd. All rights reserved. fullhyd, fullhyderabad, Welcome To The Neighbourhood are trademarks of LRR Technologies (Hyderabad) Pvt Ltd. The textual, graphic, audio and audiovisual material in this site is protected by copyright law. You may not copy, distribute, or use this material except as necessary for your personal, non-commercial use. Any trademarks are the properties of their respective owners. More on Hyderabad, India. Jobs in Hyderabad.