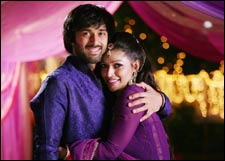 Nupur Barua / fullhyd.com
EDITOR RATING
3.0
Performances
Script
Music/Soundtrack
Visuals
5.0
3.0
4.0
5.0
Suggestions
Can watch again
No
Good for kids
No
Good for dates
No
Wait for OTT
No
Remember Band Bajaa Baraat? Leaving aside for a minute the merits and demerits of the movie, there is no doubt that it created two stars - Anushka Sharma and Ranveer Singh. It also inspired many first-time directors to write similar stories and present them to the world. Unfortunately, not everybody gets lucky, and Bittoo Boss is a shining example of what happens when you try too hard to narrate a "small-town love story set in Punjab".

Bittoo (Pulkit Samrat) is an indispensable part of weddings at Anandpur, Punjab. He is the best videographer in town, and no function begins without his arrival. He even gets to make out with the most desperate girl who happens to be a part of every such event. Life is good, and with words like "Sesky" in his vocabulary, Bittoo flits from one episode to another.

Till he meets the way-above-his-league girl, Mrinalini (Amita Pathak), whom he pesters and follows till she falls for him. She wants him to make it big, and explains that he has to swallow his pride and maybe even fall at the feet of certain producers who can advance his career. Bittoo refuses, and they fall out.

Now, since he is a respectable fellow, Bittoo ends up preventing untoward incidents, and even helps couples take the first step to physical bliss. And he decides not to make this his career.

The first half of the movie deals with how honest and fun-loving Bittoo is. Despite being the videographer, he makes it a point to dance at weddings, and even instructs people on how to carry out rituals. There is an overload of the fun element, and even chasing the girl is as clichÃ©d as it can get. She falls for him when she realises how honest his videos are, and how he captures moods and people.

And everything else happens in the second half. Just when you think one issue is resolved, along comes another problem, and the story meanders into more saccharine portrayals of the protagonist's integrity. And all the while, you will wonder what the problem with this boy's life is. The biggest mystery is this - how does he manage to fit all those cameras in hotel rooms, without letting the management know about his intentions?

The director, known for his reality shows and non-fiction programs on television, must have decided to be as unrealistic as possible in his depiction of the normal Indian scenario in a small town. Everybody is super-confident, and even the most conventional parent is chilled out about his underage daughter checking into a hotel room for some sleaze. Bittoo Boss lacks conviction on so many levels that it is a wonder that the movie was made.

Pulkit Samrat could not have asked for a better debut, though. He is sincere, restrained, and almost endearing in parts. This is his big transition from the small screen to the big, and he is promising.

Amita Pathak is the exact opposite of her co-star. She overacts, and comes across as an unpleasant personality throughout. Why the hero falls in love with her is a mystery. She may be the producer's daughter, and she may know a bit of acting, but it is highly unlikely that she will become a leading lady of Bollywood commercial cinema.

Given that the movie is set in Punjab, there is a lot of colour in the production design, although there is nothing outstanding about the way the movie has been shot. The song sequences are pretty bland, and the music is average. As far as the costume design is concerned, the less said the better.

Bittoo Boss is definitely not worth watching, unless you are a huge fan of the hero from his television days. If you intend to leave your intellect at home and just have some fun, make sure you polish up on your Punjabi - the preferred spoken language in most "Hindi movies" these days.
Share. Save. Connect.
Tweet
BITTOO BOSS SNAPSHOT 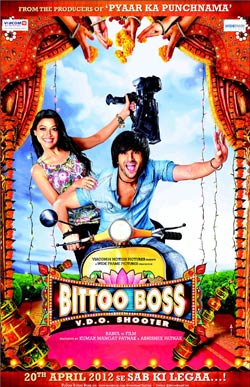 ADVERTISEMENT
This page was tagged for
bittoo boss hindi movie
bittoo boss movie kickass
Bittoo Boss hindi movie
Bittoo Boss reviews
release date
Follow @fullhyderabad
Follow fullhyd.com on
About Hyderabad
The Hyderabad Community
Improve fullhyd.com
More
Our Other Local Guides
Our other sites
© Copyright 1999-2009 LRR Technologies (Hyderabad), Pvt Ltd. All rights reserved. fullhyd, fullhyderabad, Welcome To The Neighbourhood are trademarks of LRR Technologies (Hyderabad) Pvt Ltd. The textual, graphic, audio and audiovisual material in this site is protected by copyright law. You may not copy, distribute, or use this material except as necessary for your personal, non-commercial use. Any trademarks are the properties of their respective owners. More on Hyderabad, India. Jobs in Hyderabad.