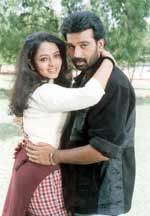 Mithun Verma / fullhyd.com
EDITOR RATING
6.0
Performances
Script
Music/Soundtrack
Visuals
NA
NA
NA
NA
Suggestions
Can watch again
NA
Good for kids
NA
Good for dates
NA
Wait to rent it
NA
. Mr. Editor, the real hero seems to be you. How did you figure a way to rip the audiences apart with your sidesplitting work?
A. "We wanted the film to be different, so I got Windows XP installed on my equipment. I wasn't entirely aware of the shortcut keys of cut and paste though I had narrowed them down to F1 and CTRL+ALT+DEL. I'm glad my efforts are fruitful!"

Q. Ms. Soundarya, the real hero... er, heroine, seems to be you. You really must've worked out to play a college girl again!
A. "Yes, it was demanding. And to commemorate the feat of me fitting - er, I mean sitting - on a bicycle, there's this song where Chakri's showing the wonder to the entire city - 'Ambarupeta, Ameerupeta, Malakapetaaa...'"

Q. Mr. Chakravarthy, you seem to be the real hero but you seem also a little worn-out.
A. "Hey, I was pedaling the cycle in that song, remember?"

Q. Mr. Krishna Reddy, the real hero seems to be you. How did you manage the film without too many emotional scenes that made you famous?
A. "I was in a happy frame of mind at that time. I found that I was not an unwanted child after all - my mother never wanted puppies."

Yes, that's what Premaku Swaagatham is like - nothing to dance in the aisles about, but thanks to some witty humor, nothing too dolorous either. It all depends on what other options you've got. Anyway, here's the tale.

Balaji (Chakravarthi) manages to make Lahari (Soundarya) flip for him through his unconscious deeds of goodness. But her Dad (Prakash Raj) has more drivers working for him than the entire Ferrari team had since the time it was started, and doesn't approve of her getting married to one. But since he's promised his daughter to get her wedded to anyone she wants, he obliges.

But Balaji doesn't have any ambitions other than driving a car, writing poetry, negotiating lunatics from committing suicide and such other characteristics of the Telugu film heroes of the '70s, and so he promises Prakash Raj that he'll make Lahari fall right out of love with him.

To this end, he takes her to his middle class house so she can experience for herself his family and the travails of poverty. She follows the syllabus like a charm and decides she's had enough, but now Balaji decides that he hasn't had enough of her. Yessir, during her stay he falls for her.

After much ado about nothing, Prakash Raj realizes that his daughter's love is more important, Balaji realizes that whatever he taught her about living in middle classes is all BS, and she realizes that her marriage to him is inevitable.

Like I said, the movie contains some splendid laughs, and is the only oxygen in this atmosphere. Sunil once again overshadows the other characters in the movie, as he slips right into the skin of the comic role he essays. The music isn't much to talk of. S V Krishna Reddy tries to copy the successful combinations of his Premaku Velaayera, but he makes this look like that metric math where algebraic symbols are used whenever we don't know what we are talking about.

ADVERTISEMENT
This page was tagged for
amberpeta ameerpet malakpet song
ambrpeta amirpeta song
Premaku Swaagatam telugu movie
Premaku Swaagatam reviews
release date
Follow @fullhyderabad
Follow fullhyd.com on
About Hyderabad
The Hyderabad Community
Improve fullhyd.com
More
Our Other Local Guides
Our other sites
© Copyright 1999-2009 LRR Technologies (Hyderabad), Pvt Ltd. All rights reserved. fullhyd, fullhyderabad, Welcome To The Neighbourhood are trademarks of LRR Technologies (Hyderabad) Pvt Ltd. The textual, graphic, audio and audiovisual material in this site is protected by copyright law. You may not copy, distribute, or use this material except as necessary for your personal, non-commercial use. Any trademarks are the properties of their respective owners. More on Hyderabad, India. Jobs in Hyderabad.