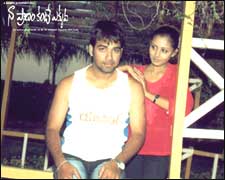 Ramakant D S / fullhyd.com
EDITOR RATING
1.0
Performances
Script
Music/Soundtrack
Visuals
NA
NA
NA
NA
Suggestions
Can watch again
NA
Good for kids
NA
Good for dates
NA
Wait to rent it
NA
I spent over an hour pillow-punching and teeth-grinding in silence to vent my frustration after watching this one. And that didn't do the trick. After another few minutes of cursing all those responsible for the evening, the work on the review began. Here goes nothing. Let's first start with the cast intros.

Hero: Hi, I'm Dr. Neeraj. Apart from mid-life career shifts and pumping my body, my interests also include acting. People said I should operate the filmmakers who came up with such a dumb script. But I outsmarted them all - I accepted the movie so that I'd get the whole audience right into my hospital chambers. In this movie, I play the lead role Ramakrishna Reddy alias Rocky, the the quintessential cool-guy-about-town-with-a-horrible-dress-sense. With my bulging biceps and made-for-TV smile, I can have any girl I choose. But it's always the traditional, middle-class girls that get me dancing through the night. And suddenly one fine day when my posse of friends was making tasteless jokes on campus, this beautiful girl walked into my life. Waitamin... what's the name of this movie again?

Heroine: Namaste, my dearies. I'm Madhu Shalini. I am a successful model and have also anchored on TV shows such as Dance Baby Dance. I guess the filmmakers were looking for beautiful Telugu speaking girls, so they choose me. Thankfully, they didn't mention girls with minimal acting sense. In NPKE, I play Chandrika, a traditional, middle class student who becomes a victim of her circumstances. My middle-class upbringing provides me with the license to wear figure-hugging outfits in college and transparent saris at home. The director was very helpful in providing invaluable acting tips. He asked me to choose any one of these three emotions throughout the movie - fear, confusion and song.

Villain: Yo! I'm Vamsi, and I play Vamsi, the villain. They didn't change my name on screen because the director apparently ran out of ideas. But I couldn't care less, 'cos I'm shown having a ball of a time. My dialogue delivery sucks so bad that I can turn into a benchmark for centuries to come. The only other competition seems to be Uday Kiran. In the movie, I'm always smiling wickedly and moving around with similarly dressed extras who lug my laptop around in a briefcase. My histrionics border on the insane, but these are painstakingly calculated moves required to bring out the depth in my character. I mouth dialouges like "Enti Madhu? Ee madhya palalo neelu kooda kalisipothunnayi... " (What Madhu? These days even milk is mixing with water...!) Deep, ain't it? Next time, I think I'll talk something about red pills and blue pills too!

Opportunistic Sidekick: Hey guys! I'm Jeevan and I play Gee One! How's that for creativity, eh? I appear quite drunk or woozy through this entire flick. That's probably why I really don't remember much of the shooting...! While signing up for this movie I had two packages to choose from. One which gave me 145 minutes of screen time with few slapstick dialogues but lots of scene-hog antics, while the other gave me 35 minutes of screen time, some of the better laugh-lines, one item song and one fight sequence where I show my newly-learnt karate skills, but all of which make me look like an opportunistic sidekick. Obviously, I'd do anything but the villain's role.

Story writer, Lyricist, Music, Screenplay and Director: I'm Shashi Preetam. I had earlier, ten years back to be precise, provided the music for the hit movie Gulabi. Now, as you have noticed, I'm doing practically everything for my baby since no else was courageous enough to come up. I have also felt that… (rumble rumble) Scram man... it's the distributors!!!

Shirtless Beggar: I appear quite often in the film for some inexplicable reason. I think I am the producer of this movie.

Rocky: Madhu, I think I love you.

Rocky: Okay, when you are standing on a desolate road wearing such body-hugging outfits, don't you think you make an easy target for eve-teasers?

Eve-Teasers: Ooooh... let's "body-guard" this girl in the car.

Madhu: Thank you for your timely help. Even though you have rescued me from the evil eve-teasers and you have so much space in your large car, I think I'll wait for the bus to arrive.

Rocky: Read those lines correctly, dumb maiden. You are supposed to get into the car.

Posse: Hey, why not we all go for an excursion?

Opportunistic Sidekick: Hey Rocky, you could propose to Madhu there and get us out of this unholy torture!

Rocky: Good… I'll ask for a close-up of her neck to check her mangalsutra and see if she's married. I could simply ask her, but that'll risk losing the only mid-riff shots in the movie.

Rocky: Madhu, I love you.

Vamsi: Rocky, you seem to have recovered from that life-threatening coma in time enough to stop my marriage. Now let's race on our ultra-modified super-bikes and decide who gets the girl.

Rocky: Okay, but on the condition that I win and you die trying.

Vamsi: Thanks. Anything to get me out of here as soon as possible!


As you may have inferred from the above articulations, Naa Praanam Kante Ekkuva can at best be considered as fodder for my aunt's fireplace and at worst as paperweight material. With absolutely no direction whatsoever and abysmally bad acting levels, only the will of God would have allowed a corporate entity like ING-Vysya to tie up with a yuck-fest of this sort.

This movie seems to have been made on a shoe-string budget of maybe a few lakhs. In fact, the very moment we find the scenes at Prasad's being shot from the "spy-cam" angle, we are sure the filmmakers were not rich enough to buy permission for the shooting. Heck! It appears as if a decent camerastand wasn't in their scheduled budget.

The actors are visible either when the camera is about an inch away from them or when they are outdoors. The rest of the time, the horrendous lighting marauds them all into creatures of black body and white teeth. And for the sake of all the tortured hapless souls out there, kindly stop showing colleges with obese, bald, goggle-flashing, 30-somethings boys, and voluptuous, navel-blazing, long haired femme fatales to be students of any sort. Has no filmmaker ever graduated through college to understand?

The songs are passable fare, and seem to be the only redeeming feature in an otherwise forgettable venture. If this product were to showcase Shashi Preetam's directorial skills, we suggest he kindly never EVER bother venturing into filmmaking again.

PS: The star in the rating is for the hero's dogs, and some up-close mid-riff shots. Drool value!
Share. Save. Connect.
Tweet
NAA PRAANAM KANTE EKKUVA SNAPSHOT

Though long, a very easy read. Does the job, with some really funny bits, without all the big words and twisted, difficult-to-understand humour.

I seriously hope they dont make any movie as this..(the review is so convincing too)

But if they do, I do hope that people like you are around..

ADVERTISEMENT
This page was tagged for
Naa Praanam Kante Ekkuva telugu movie
Naa Praanam Kante Ekkuva reviews
release date
Neeraj, Madhu Shalini
theatres list
Follow @fullhyderabad
Follow fullhyd.com on
About Hyderabad
The Hyderabad Community
Improve fullhyd.com
More
Our Other Local Guides
Our other sites
© Copyright 1999-2009 LRR Technologies (Hyderabad), Pvt Ltd. All rights reserved. fullhyd, fullhyderabad, Welcome To The Neighbourhood are trademarks of LRR Technologies (Hyderabad) Pvt Ltd. The textual, graphic, audio and audiovisual material in this site is protected by copyright law. You may not copy, distribute, or use this material except as necessary for your personal, non-commercial use. Any trademarks are the properties of their respective owners. More on Hyderabad, India. Jobs in Hyderabad.