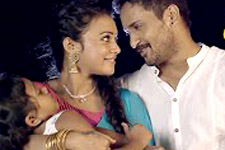 Anil Bandhakavi / fullhyd.com
EDITOR RATING
2.0
Performances
Script
Music/Soundtrack
Visuals
2.0
2.0
1.0
3.0
Suggestions
Can watch again
No
Good for kids
No
Good for dates
No
Wait for OTT
Yes
Generally, it makes sense to throw a little titbit about life before getting into a discussion about a movie. But when you watch a movie and have no clue what it's about... well, let's just say, life is really confusing sometimes, and when you don't have your homework with you, you tell your teacher that a ghost ate it. This is how you feel after you walk out of Kadhanika, a film that is and is not about spirits. Is it? Something like that.

A young man commits suicide in a mansion in Vizag. Soon after, Jai (Manoj Nandam) and his wife Shruti (Nainisha) move into the mansion, which actually is the home in which Shruti grew up. One night, while Jai is out, a little girl by the name of Kadhanika (Baby Sanjana) is almost run over by a motorist, and Jai rescues her. When Jai picks her up, Kadhanika claims that she's Jai's daughter. Jai is confused, but the little girl does not relent, and so Jai brings her home.

In a parallel saga, a young woman by the name of Saraswati (Miss Saritha) is doing her best to make ends meet to support herself and her father whom she affectionately refers to as Nani. Her father is her life, and she refuses to get married unless she finds a man who can match his character. Well, luck is on her side as she runs into a young, aspiring director who goes by the name Nani and totally charms her. They fall in love.

Meanwhile, there is something eerie about Kadhanika, and Jai is a little concerned. A DNA test reveals that she is in fact his daughter, but Jai knows that she can't be. Meanwhile, Nani finds out from one of Saraswati's neighbours that she has no father and actually just talks to herself.

A Muslim man curiously named Shankar Prasad (Srikanth Iyengar), who's a mechanic by profession, but sort of the wise man around town, is involved in the lives of both the couples. Eventually, Shankar Prasad finds out that the lives of all these people are actually intertwined, and that Kadhanika is the key to all the strange happenings. Well, something like that.

The story eventually goes to a number of places. A character is killed off by a loved one who's supposedly possessed, but then you find out that they're not possessed. Shankar Prasad, who conveniently pops up in various scenes, often with Inspector Vikram (Ravi Verma) by his side, and oddly greets everyone in Urdu, almost as though he's some shady imposter hiding his real identity, keeps changing his mind on whether there is a spirit involved in Kadhanika's life or not - he posits the existence of something called a "parallel spirit". Furthermore, one person's dad is actually another person's dad, one person's lover was once another person's lover, and even the DNA takes its turn swapping owners.

Every possible absurd link seems to get explored at some point in this schizophrenic tale of two couples. Somehow, up until the interval, you buy into the story, although one moviegoer did loudly exclaim to his date as soon as the intermission was called that he had no idea what was happening on screen - a moment of genuine laughter for the rest of the "crowd", which was three of us. Well, all five of us stayed for the second half in which the story billows out like a wild nuclear fission reaction.

Sometimes amateur writers tend to make things extra complicated to give their story a zesty edge, but really, they're just compensating for writing that lacks gravity. It's just part of the learning process. The ones who get good at the job start keeping things relatively simple. It's like when you first start going to the gym. You overtrain. You're in there for three hours at a time. Then, once you get the hang of things and build confidence - that is if you actually stick to it for the long haul - you're in and out in as little as 45 minutes.

It's generally meaningless to discuss performances when the film's story does not leave any room for redemption. But the performances are far from redeeming. At times, the characters resemble theatre actors who seem to be out of their element - some of this can be attributed to poor planning of shots. You can also spot hints in the editing of errors made while shooting.

The background score too often fails to sync with the mood of the situation.

At the end of it all, after you drift off a few times into your own life's thoughts, in the second half ...okay, we'll get back to this in a second. Remember that guy who commits suicide in the first scene? Absolutely no idea why he chooses Jai's and Shruthi's place. He really has nothing to do with the story in the end. Well, he is briefly discussed somewhere else in the movie to make a point, but it's totally unnecessary. Also, Jai actually walks in on the guy just as he shoots himself in the head, but sort of shakes it off, that's about it. They just nonchalantly throw in a super-traumatic situation that never gets reconciled properly with the rest of the story. That is kind of how things mostly play out in this movie.

Now, back to where we took that detour. At the end of it all, the film sort of concludes with some smudgy mix of a message about a father's love, good spirits, crazy daughters, let's all love each other... it's all kind of messy. You can still check it out if you want to pay for two hours of air-conditioning to escape the summer heat.
Share. Save. Connect.
Tweet
KADHANIKA SNAPSHOT 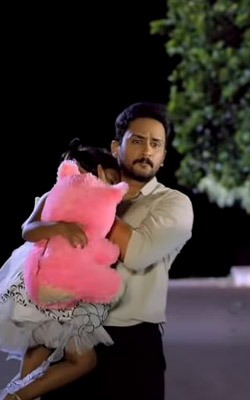 ADVERTISEMENT
This page was tagged for
Kadhanika telugu movie
Kadhanika reviews
release date
Manoj Nandam, Srikanth Iyengar
theatres list
Follow @fullhyderabad
Follow fullhyd.com on
About Hyderabad
The Hyderabad Community
Improve fullhyd.com
More
Our Other Local Guides
Our other sites
© Copyright 1999-2009 LRR Technologies (Hyderabad), Pvt Ltd. All rights reserved. fullhyd, fullhyderabad, Welcome To The Neighbourhood are trademarks of LRR Technologies (Hyderabad) Pvt Ltd. The textual, graphic, audio and audiovisual material in this site is protected by copyright law. You may not copy, distribute, or use this material except as necessary for your personal, non-commercial use. Any trademarks are the properties of their respective owners. More on Hyderabad, India. Jobs in Hyderabad.