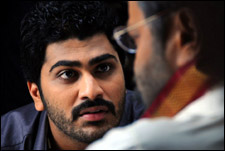 Deepa Garimella / fullhyd.com
EDITOR RATING
6.5
Performances
Script
Music/Soundtrack
Visuals
8.5
6.5
7.5
6.0
Suggestions
Can watch again
Yes
Good for kids
No
Good for dates
Yes
Wait for OTT
No
Language is caressed to orgasmic levels, characters are layered to enigmatic levels, conflicts are built to upsetting levels, and performances are rendered to awe-inspiring levels. Overall, Prasthanam is that fortuitous work-out session your grey cells so badly needed at the cinemas. It is dramatic, eloquent and rousing, and the fact that is so without a big budget backing it is both inspiring and heart-breaking.

The story is set in Vijayawada. Lokanatham (Saikumar) obliges to marry the widow Savitri (Pavitra Lokesh) of his boss (to whom he was a loyal aide), the local leader of Gannavaram, after he is slain by an adversary. Savitri's son Mitra unconditionally accepts him as his father, but the daughter doesn't. Soon, Lokanatham also fathers a son Chinna with Savitri, who Mitra grows up adoring.

Now, Lokanatham is the no-nonsense, unruffled and principled MLA of the constituency, and the grown-up Mitra (Sharwanand), a faithful man Friday who takes after his step-father in emotional make-up. While the former has aged and is more of a mastermind, the latter is composed yet dynamic and gets his hands dirty. Rival leaders and shady businessmen are thus dealt with using a potent mixture of cunning, force and strategy.

Meanwhile, Lokanatham's own son Chinna (Sandeep Kishan), who is seething with resentment at the pride of place his step-brother is getting in the family and in the eyes of the public. Fueling this cancerous bitterness are Chinna's own extra-curricular activities - goondaism and drugs - that further cause his father to treat him with harsh contempt. Chinna's soreness multiplies when Lokanatham declares Mitra the chief of the youth wing of his party.

Soon, Chinna gets convicted in a rape-and-murder case, and that's just the beginning of the complex cleaving of the family's dynamics. Loyalties expose themselves and the lust for power overpowers familial ties.

Prasthanam is primarily a drama-cum-thriller, and a meticulously scripted one at that. Deva Katta etches all his characters using the right measure of reality and melodrama, and hardly any of them seems fuzzy or even caricaturish.

More fascinatingly, he gets them to dish out some of the finest dialogues heard in recent times. The result is a torrent of impressive, almost lyrical, lines - of political satire, philosophy, codes of honour, relationships, the works.

Where Prasthanam is at fault is in the way it overdoes the complexity bit. There's a more-than-forceful attempt to pile up too much story-wise, to a rather exasperating effect. The pace suffers, especially at a point where a few quick relevant sequences could have wound up the job. And it's sometimes challenging to follow the progression of a few of the characters - especially that of Lokanatham.

That said, the whole film is executed with supreme brilliance, thanks in sizeable part to the performances. Saikumar, who initially seems too young for the role, grows on you within minutes, and he's a powerhouse of emotion. Sharwanand looks surprisingly comfortable in a role that is easily one that audiences can identify with the most.

Then, there's Jeeva with an impeccable Seema accent, Jayaprakash Reddy as bait for wickedly comic political lampooning, and Surekha Vani with possibly the meatiest role she has bagged so far. Sandeep Kishen as Chinna does a fine job as well.

The few songs scattered across have some innovative sound used in them, and are interesting to listen to. The background score is gripping, and helps the flick along. The camera work is inventive and powerful, but the quality of the ambience everywhere betrays a less-than-formidable budget.

(And on a personal front, Prasthanam is indeed one of the best movies i've watched in recent times!)

Sacheen on 11th May 2010, 8:23pm | Permalink
One of the best movies Telugu cinema has ever produced.

RATING
10
Avadhanam on 9th May 2010, 3:50am | Permalink
excellent story and dialogues. The first half of the movie is very tight and excellent narration. But the movies lost the seriousness with too too many that come at the worng times. Also we lose track of what is happening to each character towards thee nd. The last 30 minutes of the movie should be made short and crisp. The movie would not have worked without Saikumar's powerful dialog delivery style.


Pros: Good effort by Deva Katta. I loved the writing and the dialogues.
Cons: last 30 minutes shoudl eb edited. The songs shoudl be removed to maintain the seriousness of the movie.

uvrvijayasaradhi on 26th Apr 2010, 12:11pm | Permalink
Great Movie. I never understand why people do not encourage this kind of movies. Everytime the bullshit big hero movies and stupid entertainment movies and silly kullu jokes. Bloody Balakrishna movie is killing this great movie. I pity on AP cinema viewers for not encouraging this kind of movies. Great Screenplay, performance, dialogues. A perfect movie.
Siva on 22nd Apr 2010, 12:38am | Permalink
final part :-)


On the whole, I think Sarkar doesnt hold a light to Prasthanam and Prasthanam should go down as a masterpiece in times to come if not immediately.

3) The characters are black or white in Sarkar. This is the most important difference. The whole argument of Prasthanam is this fight in ourselves between Good and bad. Even Hero's brother's character is not all black and on a certain level you sympathise with him.
4)Guilt. Sai kumar is weighed down by his guilt, as is hero's mother, hero's brother does feel guilty for at least a few mins for killing Rashmi's character. Hero is the only one who stays incorruptible till the end and doesnt give in to the bad side of him even in extreme possible situation. In Sarkar, Abhishek's character clearly gets down into the death business as if he had no other option. Sarkar really used crime to glamorise these people even till the end, but there was nothing glamorised about the way these characters breakdown in the end in Prasthanam.

Siva on 22nd Apr 2010, 12:33am | Permalink
Firstly, good job reviewer - very nicely written review. could have been more generous with your rating though :-)

to those who havent seen the movie yet, it seems that 4 songs have been edited out of the movie after a couple of days, I saw it on Monday and it had only 2 or 3 songs so the viewing experience should be better than that of the most reviewers since they saw the version with all those meaningless songs

I want to respond to one of the comments saying that this movie is similar to Sarkar and also it pales in comparision to the said movie.

1) This movie does resemble Sarkar, but Sarkar in turn resembles Nayakudu, which in turn resembles Godfather. So, Sarkar is not exactly an "original" story.
2) The tension in Sarkar seemed forced and manufactured by loud background score and close up shots for no real reason. The conflict doesnt come genuinely out of story.
3) The characters are black or white
RATING
9
Illogical_movie_goer on 21st Apr 2010, 3:43pm | Permalink
The movie haunts much after you come out of the theatre. Does this mean the director has achieved his goal of making a hard-hitting political thriller? I should say, 'yes' to a large extent.

There is a striking resemblance to Sarkar. So this movie definitely appeals to those who have not seen the hindi movie. For the less fortunate ones who have seen Sarkar, this movie pales in comparision.
Having said that I should say that Deva Katta should be commended for making a bold movie with talented but less established actors like Sarwanand, Sai Kumar and Sandeep.
As far as the story goes, I have some unanswered questions to the logic in the story:
Surekha Vani rightly questions her mother why she had to mother a child through Sai Kumar if only she married Sai Kumar for the sake of the childrens' future. The answer that her mother gives is not convincing at all.
What bad company of friends can do to your adolescent son is shown well.
RATING
7
sekhar on 18th Apr 2010, 6:22pm | Permalink
Top notch performances from Saikumar, Sharawanand, Jeeva and Sandeep kishan. Director handles this Political, family drama with great care. But the length, songs in the second half do spoil some of the party. Overall, a paisa vasool movie.


Pros: Drama, Actors, saikumar,
Cons: length, two songs in second half, heroine
RATING
8
Sidharth on 18th Apr 2010, 5:06pm | Permalink
If you have recently seen Phaaltu movies like Varudu and got your mind blocked - I say go and watch Prasthaanam. Absolutely fabulous script and screenplay. Fantastic performances by Saikumar, Sarvanand and the new kid Sandeep. The main characters of the movie are soo beautiful characterised - waaow. The movie is a Telugu equivalent of the movie Sarkar. Tough the story is much different than Sarkar, the intensity and emotions in the movie are very similar.

Saikumar was absolute master in performing his role, so was sarvanand and sandeep. Nice comedy by Jaiprakash reddy and his alliance. Very different movie and I say a definite watch to all telugu movie lovers who are bored by the same bullshit hero-herorine-villian-herionefather stories.

Background score is good and the intensity in the emotional scenes is great. Music is a disappointment but one song "evade vaadu, shivudu vadu" is worth some accolades.

Overall I give a Thumbs-up to the movie. Go and enjoy.


Pros: marvellous script, excellent performances, fabulous direction, saikumar, sarvanand and all characters
Cons: one unecessary song
hemanth on 18th Apr 2010, 11:06am | Permalink
if you have good patience and bored with routine movie circuses better watch prasthanam.I am not saying its a super duper flick but it has the potential to be.Great performances by Saikumar, sarvanand, dialogues were awesome.