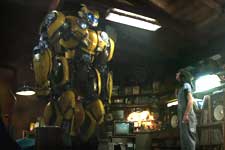 T J Reddy / fullhyd.com
EDITOR RATING
7.5
Performances
Script
Music/Soundtrack
Visuals
8.0
7.0
8.0
8.5
Suggestions
Can watch again
No
Good for kids
Yes
Good for dates
Yes
Wait to rent it
No
It is said that good artists borrow and great artists steal. If good and great artists blatantly plagiarize to save their skins, average ones have a snowball's chance in hell of coming up with something truly original which is also explicitly good. This line of thinking begs two questions: Is anything original anymore? And which pieces of art are the people behind Bumblebee taking their inspiration from?

Set in 1987 San Francisco, Bumblebee follows the story of - yes, people, this time a Transformers film has a 100% more story and a 100% fewer pee jokes - B-127, a robot from the planet Cybertron, who crashlands on Earth. He is unwillingly fleeing a Civil War on his planet after the leader of the rebellion Optimus Prime tasks him to take refuge on and protect our blue and green planet from the villainous Decepticons.

As he endeavours to follow his leader's commands, B-127 runs into a set of trigger-happy military folk led by Jack Burns (John Cena), and a former high-diver and former dad-haver who is currently a minimum-wage-job-working grease monkey simply known as Charlie (Hailee Steinfeld).

This robot out of planet gets his new name, loses his voice chip, fights off a trio bad robots, makes a few friends and saves the world all within a tidy two hours and gives the audience their money's worth in this earnest popcorn blockbuster. How does a Transformers movie get all the basics right after four and a half movies of brain-cell murdering storytelling, you ask? Well, fusing the plots of ET and The Iron Giant and hiring a likeable leading lady might have a lot to do with achieving a base level of quality.

The franchise this film is a part of has not set the bar too high as we are all aware of. With a bevy of reused shots, increasingly lazy storytelling, miscast actors working for a paycheck, racist humour, a literal scene explaining statutory rape laws and a literal shot of canines copulating that was meant to elicit laughter (?), the Michael Bay-helmed Transformers films are a veritable cornucopia of cynical and corrosive cinematic experiments.

However, Travis Knight's spin-off, while a marked reduction in terms of scale, is a joyous exercise in simplistic storytelling. This film is more Iron Man than The Avengers. Take a character, give that character a clear goal, have a clear obstacle obstructing the main character from achieving said goal, and show the main character overcoming said obstacle and growing en-route to accomplishing his/her goal, and we have a winner who gets a decent, if not Michelin-star winning, chicken dinner. Be they Hailee Steinfeld's Charlie coming to terms with the death of her father or B-127 learning the requisite skills needed to become a skilled soldier instead of a headstrong combatant, the film's well-defined characters' jagged arcs (and a clunky second to third act transition) fit with one another just well enough to keep it entertaining and engaging.

Hailee Steinfeld has been carrying movies, good and bad, on her delicate shoulders since the tender age of 14. While her character here might share one similarity with the impeccably written Mattie Ross, it is nowhere near as complex. But as we have said before, this is an exercise in the basics of storytelling, and Charlie is a simplistic character performed with a heaped helping of grace and charm by an actor with tons of those attributes on offer.

The same can be said for B-127/Bumblebee. With some subtle changes in animation and presentation, Bumblebee becomes more than just a Camaro-promoting, toy shilling robot-fighter with no discernible personality that he used to be for six whole years.

The film also rids itself of one of the primary banes of its predecessors by eliminating the stock action movie score from its repertoire, and relying more on sound design and a central theme that underline its quieter character-driven moments. This adherence to character development aids the movie as it ramps its pace up when action sequences take centrestage. With only a handful of clearly defined characters for you to care about, the wholly CGI action sequences not once feel like two indistinguishable junkyards smashing into each other. Bumblebee, Shatter and Dropkick are all painted in striking primary colours and have distinct fighting styles, which in turn helps the audiences discern all the happenings in the few well-choreographed fight scenes.

And therein lies the secret to Bumblebee's success as a film. It is the one high-school graduate coming from a family of idiots who proudly have the phrase "Idiot and Proud" plastered on their car bumpers. It is a movie that reiterates the fact that you don't need to be a product of your surroundings. Such simple goals and simple methods used to achieve said goals by a simple film that simply wants you to have a good time. Simple as.
Share. Save. Connect.
Tweet
BUMBLEBEE SNAPSHOT 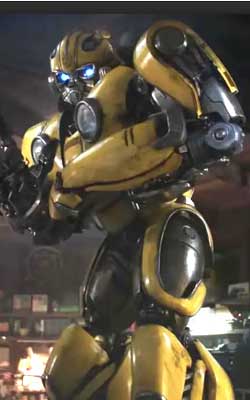 ADVERTISEMENT
This page was tagged for
Bumblebee english movie
Bumblebee reviews
release date
Hailee Steinfeld, John Cena
theatres list
Follow @fullhyderabad
Follow fullhyd.com on
About Hyderabad
The Hyderabad Community
Improve fullhyd.com
More
Our Other Local Guides
Our other sites
© Copyright 1999-2009 LRR Technologies (Hyderabad), Pvt Ltd. All rights reserved. fullhyd, fullhyderabad, Welcome To The Neighbourhood are trademarks of LRR Technologies (Hyderabad) Pvt Ltd. The textual, graphic, audio and audiovisual material in this site is protected by copyright law. You may not copy, distribute, or use this material except as necessary for your personal, non-commercial use. Any trademarks are the properties of their respective owners. More on Hyderabad, India. Jobs in Hyderabad.