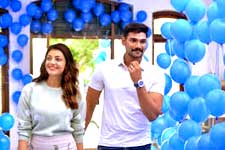 Sonali Dabade / fullhyd.com
EDITOR RATING
5.0
Performances
Script
Music/Soundtrack
Visuals
4.5
6.0
5.0
4.0
Suggestions
Can watch again
No
Good for kids
No
Good for dates
Yes
Wait for OTT
No
Kavacham is Bellamkonda Sai Srinivas' attempt at portraying a tried, tested and now discarded role, a modern take of the angry young man trope. All it does unfortunately is make you want a kavacham to protect yourself from his on-screen presence.

Sai Srinivas plays honest sub-inspector Vijay. When some goons are trying to molest Lavanya (Mehreen Pirzada) in the middle of the night, Vijay turns up and saves her. He then offers to drop her at the bus stop as she waits for her lover. As they wait, they share their love stories, with Vijay talking at length with the stranger he saved, about Samyuktha (Kajal Aggarwal), the girl he loved. When Lavanya's lover doesn't turn up, he offers her his house as a refuge for the night.

No - no rebound happens. What does, however, is a complex plot, replete with a confused web of characters, hidden plot points a la Race, and convenient situations where the hero appears on time and gets to prove his machismo. Vijay finds himself framed in Samyuktha's kidnapping, and needs to reevaluate his actions and those of the people around him. Confused about everything he knows, he embarks on a journey to find out the truth. And his mistakes - there are quite a few of them - lead him to a plethora of characters who he needs to learn more about.

There is the outwardly warm cousin (Neil Nitin Mukesh), who as we know is a bad sign in the movies. There is the clueless uncle (Mukesh Rishi) who has no idea of what's going on in his family. There's the mother's confidence on her son's righteousness. And a murderer (Harshvardhan Rane), a would-be rapist (Ajay), a bumbling and corrupt CI (Posani Murali Krishna) and the hero's companion (Satyam Rajesh) bring up the rear in the confused timeline of this average fare.

Kavacham's biggest weakness lies in its inability to keep the story crisp. One or two situations should be enough to establish the hero's character quirks. What we get instead are more and more of the hero's righteous deeds in the first half, making it unnecessarily long. His every threat, every revelation of knowledge ends with "Police!", a dialogue reminiscent of one by Mahesh Babu from Dookudu, and it looks like he is trying too hard to look an angry cop.

The first half feels like it stretches indefinitely, and the climax that is too unsatisfyingly rushed, and Kavacham is in general boring for a chunk of its run time. Too many characters introduced in succession and too many sub-plots that are hard to keep track of make it a tedious watch, and entertaining only in parts.

There was scope for Kavacham to be an amazing whodunit of sorts, but all it manages to be is a mildly entertaining cop action-drama with some appeal for mass audiences who like to get pumped up by gritty fights that send men flying through the air. Nothing that would escalate a debut director as Srinivas Mamilla into the top ranks.

Bellamkonda Sai Srinivas tries his hand at being an action hero, but his acting is below par and he simply cannot bring out the intensity that the role requires. Yes, the action sequences and the dances he performs with panache, just as he did in his debut, and he even looks good on screen, but all that is just not enough, and he drags the movie down several notches.

Neil Nitin Mukesh, in his first Tollywood outing, is surprisingly good as Vikramaditya, the scion of Samyuktha Industries. He has the evil aura necessary to make you dislike his character. Kajal Aggarwal and Mehreen Pirzada merely add the glamour quotient to the film, though Kajal's Samyuktha shows some spunk towards the end. Posani Murali Krishna is absolutely annoying, trying to bring a stale brand of humour to the movie.

Thaman's music is slightly lilting at best and confusing at worst. His tendency to use English and Hindi lyrics blossoms in this one, too, and makes you wonder songs of which language you're actually listening to. However, there are a couple of numbers that are foot-tappingly catchy in this musical menagerie. The background score is gritty, and keeps up with the mood of the film, especially every fight sequence that shows Vijay's muscle power.

While the screenplay fails the story to a certain extent, the cinematography keeps the movie a couple of feet above water. There's slo-mo action and some really unrealistic sequences that make your jaw drop in incredulity.

If you're looking for an action thriller which can keep you glued to your seat, Kavacham may not be an entirely bad choice. But it will work only if you go in without any expectations and if you are prepared to sit through 143 minutes of repetitive action, if that's even a thing.
Share. Save. Connect.
Tweet
KAVACHAM SNAPSHOT 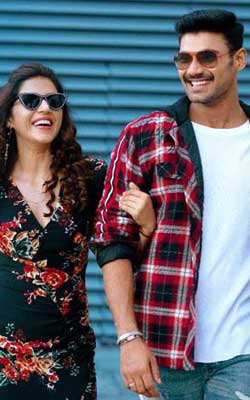 ADVERTISEMENT
This page was tagged for
kavacham full movie
kavacham review telugu
Kavacham movie hero name
kavacham movie
kavacha telgu movie review
Follow @fullhyderabad
Follow fullhyd.com on
About Hyderabad
The Hyderabad Community
Improve fullhyd.com
More
Our Other Local Guides
Our other sites
© Copyright 1999-2009 LRR Technologies (Hyderabad), Pvt Ltd. All rights reserved. fullhyd, fullhyderabad, Welcome To The Neighbourhood are trademarks of LRR Technologies (Hyderabad) Pvt Ltd. The textual, graphic, audio and audiovisual material in this site is protected by copyright law. You may not copy, distribute, or use this material except as necessary for your personal, non-commercial use. Any trademarks are the properties of their respective owners. More on Hyderabad, India. Jobs in Hyderabad.