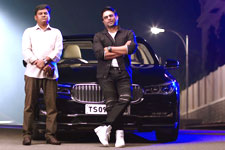 Sonali Dabade / fullhyd.com
EDITOR RATING
5.0
Performances
Script
Music/Soundtrack
Visuals
6.5
5.0
7.0
7.5
Suggestions
Can watch again
No
Good for kids
Yes
Good for dates
Yes
Wait to rent it
No
Savyasachi is a Sanskrit word that indicates male ambidexterity. So if you were to be nit-picky, the usage of this term in this movie could be argued against - because while ambidexterity means skillful usage of both hands, the Vanishing Twin Syndrome or Alien Hand Syndrome, on which this film is based, almost means one hand of a person having the added power of a fellow unborn fetus, while losing control when the person is in extreme emotional duress.

Savyasachi starts off with about 21 people traveling in a bus on some treacherous mountain roads, and all of them have one thing in common - they know a man called Arun (Madhavan). Vikram Aditya (Naga Chaitanya), a man with Vanishing Hand Syndrome, is also on this bus. In an accident that ensues, he miraculously survives, and ends up with just a broken hand. He returns home to his sister (Bhumika Chawla), her husband, and her daughter - three people who he absolutely adores.

Vikram is an ad film director with his own agency, Artihc. He goes back to work and is approached by a company called V Rewind. He finds that Chitra (Niddhi Agerwal) is responsible for that little startup that creates items of memorable value for its customers. Chitra and Vikram have a past - they were in love when in college, but one day Vikram had just left without giving Chitra a reason.

After a shoot in the USA, where Vikram reveals to Chitra his reasons for leaving, he returns to find out that his house has been blown up, and the devastated news of the deaths of his brother-in-law and niece. Then starts a cat-and-mouse game as Vikram's past catches up with his present, and wreaking further havoc in a world where gratification and praise seem to be out of order.

The plot is essentially a revenge drama that also uses the interesting concept of the Vanishing Twin Syndrome. What makes it an enjoyable watch is all the humour (though some might find it bordering on crassness) that is milked to saturation point. Yes, there are flimsy explanations for some of the characters' behaviours, and it's unclear why the left hand being more powerful than the right is critical to the film, but there's nothing that cannot be overlooked.

However, while the first half of Savyasachi is entertaining thanks to the humour, the second drags. The output would have been much better especially if the 15-minute unnecessary flashback in the second half were cut short. This includes a very annoying rehash of a Nagarjuna song. Sure, sometimes these help with the fan bases, but here it's just embarrassing.

Naga Chaitanya tries hard to show grit in his role, but he is outshone by everyone else in the movie, including Shakalaka Shankar, who has a role as a producer Satti Babu based in the USA. Shankar and Vennela Kishore provide the comic relief while Bhumika Chawla, though not exceptional, plays a concerned sister to the T. Nidhhi Agerwal makes her debut with this film, and even in this time and age, is relegated to just being the hero's love interest and provide some glamour.

When Sakhi came out all those years ago, nobody could have imagined chocolate boy Madhavan in any other role. But over the years he has broken barrier after barrier. Savyasachi is no exception - though Madhavan arrives in the later part of the movie, he carries the film on his shoulders thereon. He is effortless as Arun Raj, and the glint in his eyes makes you loath him viscerally even though you know he is Madhavan and not the character.

The background score blends in perfectly with the movie's aesthetic, changing according to the mood and working how the plot wants it to. And there are some fairly catchy, foot-tapping numbers on the album. The visuals are good enough - while there aren't many memorable shots in the movie, the cinematography will not cause you any grief.

On the whole, Savyasachi is at best just a one-time watch. A different star in the lead role and a tighter script could have made this a much better movie.
Share. Save. Connect.
Tweet
SAVYASACHI SNAPSHOT 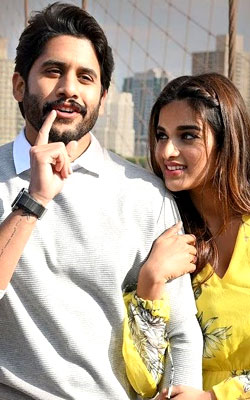 ADVERTISEMENT
This page was tagged for
Savyasachi telugu movie
Savyasachi reviews
release date
Naga Chaitanya, R Madhavan
theatres list
Follow @fullhyderabad
Follow fullhyd.com on
About Hyderabad
The Hyderabad Community
Improve fullhyd.com
More
Our Other Local Guides
Our other sites
© Copyright 1999-2009 LRR Technologies (Hyderabad), Pvt Ltd. All rights reserved. fullhyd, fullhyderabad, Welcome To The Neighbourhood are trademarks of LRR Technologies (Hyderabad) Pvt Ltd. The textual, graphic, audio and audiovisual material in this site is protected by copyright law. You may not copy, distribute, or use this material except as necessary for your personal, non-commercial use. Any trademarks are the properties of their respective owners. More on Hyderabad, India. Jobs in Hyderabad.