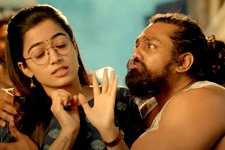 Anil Bandhakavi / fullhyd.com
EDITOR RATING
6.0
Performances
Script
Music/Soundtrack
Visuals
7.0
5.0
6.0
6.0
Suggestions
Can watch again
No
Good for kids
No
Good for dates
Yes
Wait for OTT
Yes
It is generally easy for a person to uphold societal ideals like justice and family values when his or her circumstances in life are in concert with them. For example, it's not that hard for someone from a happy family to uphold the importance of family. But when one is hurt by the expectations built up by these ideals, they can go rogue, and it can be quite tricky to reintegrate him into the common understanding held by all.

Pogaru, written and directed by Nanda Kishore, tackles this idea in a hard-hitting story about a young man who loses his way and subscribes to a life in which he places himself aside from society. The film, which is centred around the one character, strongly relies on Dhruva Sarja's performance, and he responds by emanating a high level of pogaru (arrogance), living the life of his on-screen character with a beast-like energy.

Shiva (Dhruva Sarja) loses his father at a very early age, but the fact is hidden from him well into his teenage years. After the passing of her husband in his infancy, Shiva's mother (Pavitra Lokesh) decides to remarry to give Shiva a father figure. Shiva's step-father (P Ravi Shankar) is a patient man, and convinces Shiva's mother that he will reveal the truth to him once he gains Shiva's trust.

However, Shiva learns of his father's death when he goes to see his grandmother on her deathbed. He feels terribly deceived, and demands that his mother leave her husband to come live with him. Unable to tolerate Shiva's rageful fit against his stepfather, his mother asks him to get out with some very harsh words. The cutting words are unbearable, and Shiva vows to never allow others to govern his well-being and happiness, as no one is to be trusted in this world.

Shiva grows into a derelict and a mercenary of sorts. Disenchanted by the emotions of love and familial bonding, he lives by the idea that money is what runs people. In conflicts, he takes the side of the person who he thinks is being snatched of their happiness at that moment, not caring for whether that person is good or bad. However, there is always an indication that somewhere deep in his personality, he does uphold the idea of justice.

The film narrates the story of a conflicted man who's convinced that he's picked the best way to live and holds on to his new-found ideals, being forced to face the matters of love and family. Thrown into the mix is also an allusion to the polarity in the perceptions of romance and relationships by men and women.

Dhruva Sarja captures Shiva's character in immaculate fashion. He gets the appearance, demeanour and language just right. Rashmika Mandanna, who's plays Geetha in the film, aptly depicts the antithetical force in Shiva's life who neutralises his stubborn convictions over time. There is not one scene in the movie in which Geetha is present without Shiva, so her role is entirely played out in conflict with him. In that sense, the entire story is constructed as a journey through Shiva's psychology.

Shiva's tumultuous personality is complemented well by music that's replete with noisy drumbeats that keep up the energy. The dialogue in the film is strong, hammering in its message in various scenes, like the one in which Shiva's mother disowns her young and unmanageable son. Shiva's self-centred monologues through the film pull you in, almost with a sense of disgust, towards a person who's so lost but thinks he's so right. The fight scenes are exciting, with a lot of the credit being owed to Dhruva Sarja's wrestler-like aggression. The final showdown is creative and a treat for audiences who crave such action.

On the flipside, the story itself is quite mediocre. In a nutshell, it's about a kid who is disturbed by the trauma of losing his father, rejects the new man in his mother's life, and goes down the wrong path. However, what make for a good narration are well-developed characters who're put into situations that get the audience invested. Pogaru, for a film that takes away almost three hours of your precious time, manages to deliver the latter - with almost all the credit going to Dhruva Sarja's captivating performance.
Share. Save. Connect.
Tweet
POGARU (TELUGU) SNAPSHOT 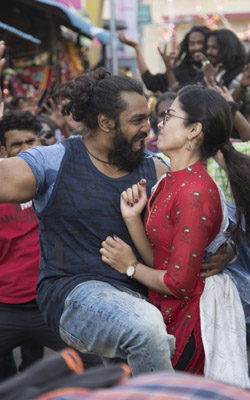 ADVERTISEMENT
This page was tagged for
Pogaru (Telugu) telugu movie
Pogaru (Telugu) reviews
release date
Dhruva Sarja, Rashmika Mandanna
theatres list
Follow @fullhyderabad
Follow fullhyd.com on
About Hyderabad
The Hyderabad Community
Improve fullhyd.com
More
Our Other Local Guides
Our other sites
© Copyright 1999-2009 LRR Technologies (Hyderabad), Pvt Ltd. All rights reserved. fullhyd, fullhyderabad, Welcome To The Neighbourhood are trademarks of LRR Technologies (Hyderabad) Pvt Ltd. The textual, graphic, audio and audiovisual material in this site is protected by copyright law. You may not copy, distribute, or use this material except as necessary for your personal, non-commercial use. Any trademarks are the properties of their respective owners. More on Hyderabad, India. Jobs in Hyderabad.