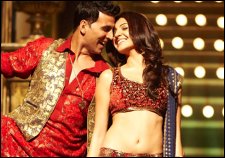 Kakoli Mukherjee / fullhyd.com
EDITOR RATING
6.0
Performances
Script
Music/Soundtrack
Visuals
7.0
6.0
8.0
5.0
Suggestions
Can watch again
Yes
Good for kids
Yes
Good for dates
Yes
Wait to rent it
No
It was high time that Akshay Kumar ended his jinxed run at the box office, and Nikhil Advani, too, needed to find ground again after a disaster called Chandni Chowk To China. Patiala House, perhaps, bears good tidings for both of them, landing them on safe grounds with a soft thud, even if not catapulting them to blockbuster glory.

Advani uses all the tested props here - cricket, an NRI-Punjabi milieu and national pride - but keeps all of these as the garnishings, letting the father-son coming off story take centrestage. He dwells on dreams and family ties, and the perils of doing a balancing act between the two. The result is a sober film, seasoned almost perfectly with subtle humour, romance and Bollywood drama, pulling your heartstrings at the right places inspite of a few glitches.

Parghat Singh Kahlon (Akshay Kumar), aka Gattu, is a man who just exists in the name of living, having abandoned his dreams of becoming a star bowler in the English cricket team due to the vehement opposition of his father (Rishi Kapoor). His self-introductory line, "Main hoon Parghat Singh Kahlon, aur main apne Bauji ki batayi hui zindagi jeeta hoon," quite sums up his life in the first half, running his father's stationery shop like a zombie, and being the butt of jokes for his entire family.

Gattu's father, who is a hero in the South Hall neighbourhood of London, having successfully fought the racist English all his life and earning Punjabis their place of pride, runs his extended family inhabiting Patiala House like a dictator. He hates everything English, and under his iron-fist rule, all the members give up their dreams to comply with Bauji's diktats.

But dreams come knocking again when Gattu gets a second chance to reclaim his cricketing glory to salvage an ailing English cricket team. Also, another feisty dreamer, Simran (Anushka Sharma), and her brother prod him to break away from his father's emotional straitjacket, and with this, the dreamers of Patiala House consider living their lives again.

Pitting the son's aspirations against the father's obstinate, uni-dimensional way of thinking, Advani creates an engaging drama showcasing the conflicts of the "me-vs-the-family" act. There are times, though, when the script falters and tries to gloss over loopholes. Firstly, the members of Patiala House are not all introduced properly, and the reason they need to abide by Bauji's idiosyncracies is never explained. Secondly, the show that the members put up to hide Gattu's cricketing forays from his father looks lame, and is unconvincing for the most part. Also, the love track between Parghat and Simran remains half-baked.

But the bravo performance of the father-son duo does not allow you to mull over the discrepancies much, and keeps connecting with the audience throughout. Akshay Kumar, straying away from his comfort genre for once, is refreshing and brilliant. He turns in a restrained performance, playing the vulnerable son trying to find an even ground between his father's ideals and his own dreams. For once, he comes across not as a clownish embellishment but as an actor.

Rishi Kapoor plays the autocratic head of the family with ease, bringing out the arrogance and vanity of the character who wants everyone in his life to follow his rules. Dimple Kapadia is good as the patient wife and mother, and her pairing with Kapoor evokes nostalgia. Anushka Sharma looks a million bucks, and acts well, too. The kid who plays her brother puts up a good performance.

Much of the narration is helped by Shankar-Ehsaan-Loy's music, striking the right chord in each frame, and taking the narrative forward with the help of Anvita Dutt Guptan's soulful lyrics.

Patiala House is wholesome cinema, and makes for a good watch with your family. And if you are an Akshay Kumar fan, you would not want to like miss it.

See Patiala House full details
PATIALA HOUSE USER REVIEWS
1 - 2 OF 2 COMMENTS
POSITIVE  |  NEGATIVE |  NEWEST  |  OLDEST  |  MOST HELPFUL  |  LEAST HELPFUL
USER RATING
8.5
2 USERS
Performances
Script
Music/Soundtrack
Visuals
9.0
8.0
9.0
9.0
Can watch again - Yes
Good for kids - Yes
Good for dates - Yes
Wait to rent it - No
2power10 on 14th Feb 2011, 9:56am | Permalink
1. The movie is unbelievably melodramatic.
2. The visuals brought back memories of Kal Ho Na Ho, though tooo much of slow motion kind of jarred the senses.
3. Anushka Sharma overacts, and made me miss Preity Zinta.
4. Akshay Kumar is awesome
5. Too loud-Punjabi, but Akshay and Rishi Kapoor make it worth it!
6. Great music, though the Punjabi-ness is too much for comfort, again.
7. A little lame, but a wholesome film overall.

ADVERTISEMENT
This page was tagged for
Patiala House hindi movie
Patiala House reviews
release date
Akshay Kumar, Rishi Kapoor
theatres list
Follow @fullhyderabad
Follow fullhyd.com on
About Hyderabad
The Hyderabad Community
Improve fullhyd.com
More
Our Other Local Guides
Our other sites
© Copyright 1999-2009 LRR Technologies (Hyderabad), Pvt Ltd. All rights reserved. fullhyd, fullhyderabad, Welcome To The Neighbourhood are trademarks of LRR Technologies (Hyderabad) Pvt Ltd. The textual, graphic, audio and audiovisual material in this site is protected by copyright law. You may not copy, distribute, or use this material except as necessary for your personal, non-commercial use. Any trademarks are the properties of their respective owners. More on Hyderabad, India. Jobs in Hyderabad.