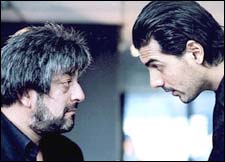 Priyanka Pulla / fullhyd.com
EDITOR RATING
6.0
Performances
Script
Music/Soundtrack
Visuals
NA
NA
NA
NA
Suggestions
Can watch again
NA
Good for kids
NA
Good for dates
NA
Wait for OTT
NA
That Zinda is a remake of South Korean film Oldboy is already much dissected and antique news. So the question on everybody’s mind is how good a job Sanjay F Gupta did of remaking this time.

Well, to begin with, this could easily be counted as the second schizophrenic movie this week. Zinda cannot make up its mind whether it is a brutal action drama or a philosopher’s treatise. Bang in a middle of a sweaty chase scene, the movie bursts into song about a lonely man, looking for his destiny, searching for himself yadda yadda yadda. Somehow the languidly posed existential questions are like a forcible pause on a racing amusement ride. As if someone suddenly pulled the plug on the music in a discotheque, and started playing a thumri.

He leaves a pregnant wife behind, and the next time we blink, we see him in a tiny rat-hole of a cell, banging on the walls and shouting to be let out. It transpires that Bala spends 14 years of his life in this cell, doing nothing but watching TV and eating just one particular kind of Thai dish. Like so many man-on-the-run protagonists who have laid out the way for him, whether Pappilon, Shantaram or The Fugitive, our Bala practices his punches on walls, and learns martial arts from TV.

The telling of this story somehow comes across as cursory, with token references to elements such as his food, the TV, world affairs playing on it like the WTC bombing and the Tsunamis, and his practicing martial arts. Gupta hasn’t developed on any episode long enough for it act as an anchoring light-house that illuminates the rest of the story around it. Instead the flick runs as if an out-of-breath first grader is reciting a memorized tale. You can almost hear the “and then… and then… and then”, between the scenes.

And then, the day comes when Bala is released with a pocket full of cash and a cellphone. Soon enough he runs into a supermodel who drives a taxi for a hobby, namely Jenny Singh, the unlikely taxi-driver. With her tresses haloing her head like she is a ramp-goddess, she does a modern day Basanti act though it doesn’t leave half the impression the original did.

She takes Bala around Bangkok, as he goes around tasting food at every restaurant, until he spots the taste that he had to endure for 14 years. He sniffs along the trail and finally zeroes in on the guy who was dastardly enough to plot this barbarous torture.

Zinda progresses in fits and starts, and it is only towards the end that it finally comes into its element. As plot after plot unfolds, there are entirely unexpected surprises. Unfortunately, the end, which is supposedly different from the Oldboy original, plays antidote to the little poison that would have saved the movie. Just when Zinda begins to take on character, as impotent villains turn into bonafide monsters and victims become the damned, just when a last act of creative courage and non-conformism would have saved it, Zinda turns flaccid again. What a bore! And this time it is because Gupta did NOT plagiarize. Fully.

Another word of caution - there is a lot of gore here: teeth breaking, and power drills in people’s flesh. Zinda will also take the cake as one of the more nauseating movies this season.

Sanjay Dutt is all right as Balajit, while John Abraham shines as the character we did not mention yet in the review. He is part of the mystery, of course. We can tell you, though, that he is pretty darn good, and shines brilliantly in his part. Lara Dutta doesn’t have much to do except splutter some funny dialogues, and she is not, cannot be, too bad either. Celina Jaitly is just a face – very gorgeous, and gone too soon.

You might catch this movie if you keep the original out of your head, and primarily because at 2 hours, it is not very demanding on your time. But don’t expect finesse or brilliant craftsmanship, for, while Zinda may be okay on cogency and continuity, it neither has style, nor is it impacting. Look at it as a hopeful first experiment, a prototype of movies its kind in Bollywood. In which case your expectations just might be exceeded.
Share. Save. Connect.
Tweet
ZINDA SNAPSHOT

ADVERTISEMENT
This page was tagged for
????? ???? ?????
jindaa hindia movie review
zinda movie story
Zinda 2013 movie review in hindi
zinda movie story in hindi
Follow @fullhyderabad
Follow fullhyd.com on
About Hyderabad
The Hyderabad Community
Improve fullhyd.com
More
Our Other Local Guides
Our other sites
© Copyright 1999-2009 LRR Technologies (Hyderabad), Pvt Ltd. All rights reserved. fullhyd, fullhyderabad, Welcome To The Neighbourhood are trademarks of LRR Technologies (Hyderabad) Pvt Ltd. The textual, graphic, audio and audiovisual material in this site is protected by copyright law. You may not copy, distribute, or use this material except as necessary for your personal, non-commercial use. Any trademarks are the properties of their respective owners. More on Hyderabad, India. Jobs in Hyderabad.