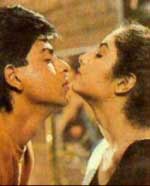 Arpan Panicker / fullhyd.com
EDITOR RATING
7.5
Performances
Script
Music/Soundtrack
Visuals
NA
NA
NA
NA
Suggestions
Can watch again
NA
Good for kids
NA
Good for dates
NA
Wait to rent it
NA
This is the film that marked the debut of the hottest Bollywood star of the 1990s - Shah Rukh Khan. His advent, both in this film and the industry, couldn't have come at a better time. Graying heroes like Rishi Kapoor romancing nymphets like Divya Bharati was getting on the audience's nerves. And then to see a young man, bristling with energy and life, burst onto the screen was as refreshing as sunlight in the midst of an English winter.

Raj Kanwar's film had nothing new to offer in the first half. Rishi Kapoor is a rich young singer, who falls in love with and marries Divya Bharati. But pretty soon Amrish Puri - his treasurer - and his son, Mohnish Behl, murder him. Having done so, they keep Rishi's mother and Divya Bharati under house arrest. But the two manage to give the villains a slip and reach another town.

The second half starts with Shah Rukh's intro with the song, Koi Na Koi Chahiye. At the end of the song, he runs into Divya Bharati and falls in love with her. But she cannot reciprocate his love, as she hasn't quite managed to forget Rishi Kapoor. Nevertheless, Shah Rukh wins her over with his heroic antics and the two marry. But it isn't time yet for them to live happily ever after, as Rishi Kapoor makes a comeback. The complications are sorted out pretty conveniently by the director, and with whom Divya lives happily ever after, is for you to find out.

The movie is a typical Bollywood potboiler with commonplace characters, with the exception of Shah Rukh's. His presence, along with Divya Bharati's, and the music, saw to it that the movie was a huge hit. Rishi Kapoor is a good actor but it didn't look good when he tried doing the song 'n' dance routine with girls in their early 20s. To her credit, Divya Bharati did a very controlled job and looked suitably mature in the second half.

But it is Shah Rukh who stole the show from everyone else. Following his success on television, Shah Rukh's debut in films was already being anticipated. Once the film met with success, the arrival of a new star was formalized. The rest, as they say, is history.

Surely, a movie worth checking out another time in the theaters.

ADVERTISEMENT
This page was tagged for
divana muvie
deewana film full movie
DIVANA.HINDI.MUVIE
Deewana shahrukh Review
deewana rishi kapoor full movie
Follow @fullhyderabad
Follow fullhyd.com on
About Hyderabad
The Hyderabad Community
Improve fullhyd.com
More
Our Other Local Guides
Our other sites
© Copyright 1999-2009 LRR Technologies (Hyderabad), Pvt Ltd. All rights reserved. fullhyd, fullhyderabad, Welcome To The Neighbourhood are trademarks of LRR Technologies (Hyderabad) Pvt Ltd. The textual, graphic, audio and audiovisual material in this site is protected by copyright law. You may not copy, distribute, or use this material except as necessary for your personal, non-commercial use. Any trademarks are the properties of their respective owners. More on Hyderabad, India. Jobs in Hyderabad.