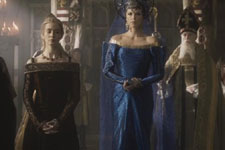 Zehra Abbas / fullhyd.com
EDITOR RATING
4.0
Performances
Script
Music/Soundtrack
Visuals
7.0
3.0
5.0
7.0
Suggestions
Can watch again
No
Good for kids
No
Good for dates
No
Wait for OTT
Yes
Is it a prequel? Or a sequel? Did someone say it's both? Once you recover from that head-scratcher, try figuring out the target audience for this strange mishmash of a film. A baby dies horrifically in the first five minutes - so let's rule out kids. But wait, there's an Ice Queen who looks like Elsa, there are loveable dwarves, and much of the visual scenery (you gotta see the squirrels) is very Disneyesque when it's not trying to be Narniaesque. Er... kids, you still there?

Imagine sustaining that confusion and frustration over approximately two hours, and you have a gist of The Huntsman viewing experience.

First, let's talk about the story which the writers obviously penned before they got their MFAs. We are taken back in time and treated to the terrifically boring origin story of the titular character. Freya (Emily Blunt), the sister of Ravenna (Charlize Theron), suffers a tragic loss, which unleashes her magical frostiness (literally and metaphorically). She moves to the north, builds a big-ass snow castle, kidnaps kids and turns them into an army of huntsmen to help her conquer the land.

The Ice Queen has one rule - no love. In a shocking and totally unexpected twist, her prize huntsman Eric (Chris Hemsworth) and prize huntswoman Sarah (Jessica Chastain) promptly fall in love. Freya creates a wall of ice between them (again, literally and metaphorically) and separates the lovers. At this point, Liam Neeson's pseudo-majestic, dulcet narration informs you that the prequel is over, the events of the first film have transpired, and we have segued into the sequel. Go figure. Eric, the huntsman, is commissioned by an ailing Snow White to retrieve Ravenna's magic mirror before it falls into Freya's hands, and the rest of the film is about said retrieval.

What works? We can do this fairly quickly. The visuals are lovely in numerous scenes, and the producers have gone to great lengths to source beautiful locations. Then there's the brave cast. All the actors do a stand-up job, but the scene-stealers are Charlize Theron as Ravenna, a delicious nugget of gold-wrapped evil, and Emily Blunt as her sister Freya, who brings a vulnerable complexity to her character's cold, jagged edges. The best scenes in the film focus on the twisted dynamics between the siblings, and not the romance of the lead pair. The film is quite the feminist paean because even the forced comic relief provided by the huntsman's dwarf companions is redeemed by Mrs. Bromwyn (Sheridan Smith) - if Snow White inducted her into her retinue of dwarves, she'd be christened Spunky.

What doesn't work? We're not sure where to begin. Take the utter lack of inventiveness for one. The obvious comparisons with Disney's Frozen aside, you are reminded of Narnia intermittently. The voice of Aslan (Liam Neeson) narrating events doesn't help. Fantastic creatures, manic villains - writers Spiliotopolous and Mazin are but pale shadows and definitely not in the league of a literary master like Tolkien. Even when they abruptly change gears in the second half, and try to present a fun, adventurous romp, an infinitely more interesting tale about a certain Mr. Baggins comes to mind.

Also, this film and the previous one are purportedly a reimagining of the Snow White fairytale. That begs the question - Snow White, where art thou? It's true that Kristen Stewart's exclusion is a relief, but the makers should have presented a more polished retcon to explain the character's absence.

Considering the shocking lack of imagination, you'd think the makers would at least keep things moving at a fast pace, but no, the narrative drive navigates a frustrating stop-and-go journey. The lead pair Hemsworth and Chastain look beautiful, but their chemistry is as cold as Freya's bottom after she's been sitting on her solid ice throne for too long. Even when the actors are in a hot tub, you are distracted by the strange accents that the pair are sporting for this film. Additionally, director Nicholas-Troyan forgot to tell Hemsworth that a funny quip followed by a broad grin does not constitute leading man charm anymore - that went out of style with the '80s.

What of the action and 3D, you say? The action choreography brings nothing new to the arena, and most of it relies on frenetic editing that basically serves up a blur. The big, old climax where the main players go head-to-head is essentially ice versus tar - Freya shoots out icicles and Ravenna shoots out solidified tar. As for the 3D, except for one mildly vertiginous moment, there is no reason for you to resist the temptation to claw those glasses off your face. Hollywood truly needs to reflect on its use of 3D - why darken the screen for viewers unnecessarily?

The Huntsman: Winter's War is a classic and unfortunate example of Hollywood's hankering for the revenue that a successful, or even moderately successful, franchise can yield. Sacrificing the basic tenets of entertaining and intelligent filmmaking doesn't seem to be a concern. So don't be lured into the theatres by the trailer of this one. The only thing magical about The Huntsman is how the trailer of this turkey managed to look promising.
Share. Save. Connect.
Tweet
THE HUNTSMAN: WINTER'S WAR SNAPSHOT 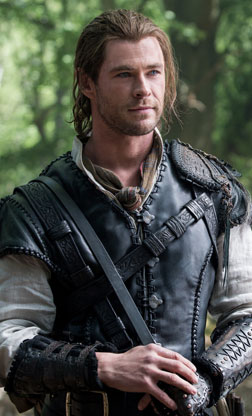 ADVERTISEMENT
This page was tagged for
The Huntsman: Winter's War english movie
The Huntsman: Winter's War reviews
release date
Chris Hemsworth, Jessica Chastain
theatres list
Follow @fullhyderabad
Follow fullhyd.com on
About Hyderabad
The Hyderabad Community
Improve fullhyd.com
More
Our Other Local Guides
Our other sites
© Copyright 1999-2009 LRR Technologies (Hyderabad), Pvt Ltd. All rights reserved. fullhyd, fullhyderabad, Welcome To The Neighbourhood are trademarks of LRR Technologies (Hyderabad) Pvt Ltd. The textual, graphic, audio and audiovisual material in this site is protected by copyright law. You may not copy, distribute, or use this material except as necessary for your personal, non-commercial use. Any trademarks are the properties of their respective owners. More on Hyderabad, India. Jobs in Hyderabad.