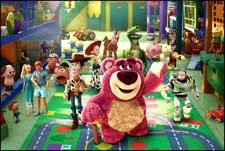 Samrat Sharma / fullhyd.com
EDITOR RATING
8.5
Performances
Script
Music/Soundtrack
Visuals
8.5
6.5
9.0
10.0
Suggestions
Can watch again
Yes
Good for kids
Yes
Good for dates
Yes
Wait for OTT
No
Toy Story 3 is a bit of a disappointment for fans of the original films - throughout the running time of the film, Toy Story 3 tackles the same issues as the previous films, and takes us through the same character arcs more or less. The ending leaves room for more films to come, and this basically serves as a reboot of the franchise.

The film has a smaller group of toys from the original, whittled down in number after years of broken toys and yard sales, worrying about their owner Andy going to college. Eventually they try to make a break for it, and end up in Sunnyside Day Care, which at first appears to be a great place, but turns out to be a gulag run by a bear called Lotso Hugs.

The entire theme of an owner outgrowing his toys and the insecurity that the toys feel at being unloved was done previously, and better, in Toy Story 2, and the prison break they attempt has shades of the first movie as well. Despite that, this is Pixar, and all this is all done really really well.

Even when rehashing a franchise, the magic that Pixar can mould from pixels is second to none, and the film feels energetic and immediate, and has some great moments. Every one of the small selection of toys left gets a proper beat and something to do in the film - something that was not true at least for the first film. The new characters go to new and dark places for a kids' film, and that is a welcome addition for adults watching.

There are some jokes at the expense of a metro-sexual Ken, and Lotso goes to sadistic ends which surprised me in an animated film for children. Prison films are referenced cleverly (and not overtly, which is Dreamworks style) and the final prison-break sequences create the best action film you will see this summer.

The escape sequences create a genuine sense of dread for the characters' safety, and deliver thrills better and more visceral than any other action movie I have seen this year. And being the action film it is, it can balance the nuanced and well-done story arc for Lotso, and the non-existent character depth for the rest of the toys.

Seeing as the previous films had covered most of the emotional ground for these toys, the flick does not try and get to their core again. They get a lot of fun stuff to do, but not a real tangible sense of progression. This is fine in most films, especially if they are as well-done as this one, but somehow for Pixar, this seems a little less. The expectations for a fan like me were sky-high, and while technically and in entertainment value they met them, the film did leave me with a sense of deja vu.

Pixar's pedigree does help the film in the technical department. This has to be the best-looking film out there right now. Not only is the colour palette astonishing, the use of light and shadow is pitch perfect to set the mood and tone for each scene. Gone are the universally-lit days of flat animation films, this is a new high in animated feature film making.

Judged solely on its own merits and not on the previous films' or Pixar's history, Toy Story 3 is still a rousing action film, and an entertaining animated feature. It creates one of the most memorable characters in Pixar history, and genuinely takes its humour and dialog to the edge of children's cinema.

For fans of Pixar, fans of the Toy Story movies, this is still completely brilliant. For fans of well-made films and cinematic entertainment, this is essential viewing.
Share. Save. Connect.
Tweet
TOY STORY 3 (3D) SNAPSHOT

ADVERTISEMENT
This page was tagged for
Toy Story 3 (3D) english movie
Toy Story 3 (3D) reviews
release date
Tom Hanks, Tim Allen
theatres list
Follow @fullhyderabad
Follow fullhyd.com on
About Hyderabad
The Hyderabad Community
Improve fullhyd.com
More
Our Other Local Guides
Our other sites
© Copyright 1999-2009 LRR Technologies (Hyderabad), Pvt Ltd. All rights reserved. fullhyd, fullhyderabad, Welcome To The Neighbourhood are trademarks of LRR Technologies (Hyderabad) Pvt Ltd. The textual, graphic, audio and audiovisual material in this site is protected by copyright law. You may not copy, distribute, or use this material except as necessary for your personal, non-commercial use. Any trademarks are the properties of their respective owners. More on Hyderabad, India. Jobs in Hyderabad.