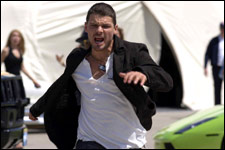 Sudhir Pai / fullhyd.com
EDITOR RATING
2.0
Performances
Script
Music/Soundtrack
Visuals
1.0
1.0
4.0
3.0
Suggestions
Can watch again
No
Good for kids
No
Good for dates
No
Wait to rent it
No
Redline is proof enough that creative minds are caught in the slowdown, too. It's hard to imagine how anybody worth his D grade in a course on filmmaking can release a ridiculous movie like this.

Redline is a story of soapy rear ends (a few of which belong to bikini-clad bimbos) getting sprayed with water from long hoses. The retarded storyline starts with a few rich guys who bet outrageously on illegal races. It brings together an aspiring rock singer turned race-car driver Natasha Martin (Nadia Bjorklin) and an Iraq-returned war hero Carlos (Nathan Phillips), who's driver-brother Jason (Jesse Johnson) becomes a victim of drag overdose.

For a movie that is about speed, it reminds you of your old Premier Padmini huffing and puffing its way up Road No. 12 at Banjara Hills. The mediocrity is so stupefying that at intermission, the audiences are Gone In 60 Seconds. It took this reviewer immense courage and a promise of writing a sarcasm-filled review to sit through the punishing second half.

And worse it gets. Adding a road block to the several speed-breakers in the plot is a kidnapping scheme by a Hitleresque vegan-villan, Mike (Angus Macfadyen), who wins Natasha's services as a part of a wager. We also realize that Natasha's cleavage gets as much screen-time as the cars themselves.

Also completing this vanity production is a hot mom who gets a surprise call from her kidnapped daughter, a war veteran's combative skills that could possibly have won Dubya his third term as the President, a farcical car race that induces as much testosterone as a game of Ludo, and a couple of lovers who answer a mating call by blowing car horns and burning rubber. Yes, Ladies and Gentlemen. It's so bad, you'll find it entertaining for its sheer stupidity.

The only kind who may find Redline a redeeming experience are juvenile losers who dream of hot cars and hotter women all day, but are far from being acquainted with either. For a car fan, we recommend the latest sequel of Fast And Furious. Or even the gaming floor at Prasads. And for those who pick up tickets for Redline by accident, we pray for a speedy recovery.
Share. Save. Connect.
Tweet
REDLINE SNAPSHOT

ADVERTISEMENT
This page was tagged for
Redline english movie
Redline reviews
release date
Nathan Philips, Nadia Bjorklin
theatres list
Follow @fullhyderabad
Follow fullhyd.com on
About Hyderabad
The Hyderabad Community
Improve fullhyd.com
More
Our Other Local Guides
Our other sites
© Copyright 1999-2009 LRR Technologies (Hyderabad), Pvt Ltd. All rights reserved. fullhyd, fullhyderabad, Welcome To The Neighbourhood are trademarks of LRR Technologies (Hyderabad) Pvt Ltd. The textual, graphic, audio and audiovisual material in this site is protected by copyright law. You may not copy, distribute, or use this material except as necessary for your personal, non-commercial use. Any trademarks are the properties of their respective owners. More on Hyderabad, India. Jobs in Hyderabad.